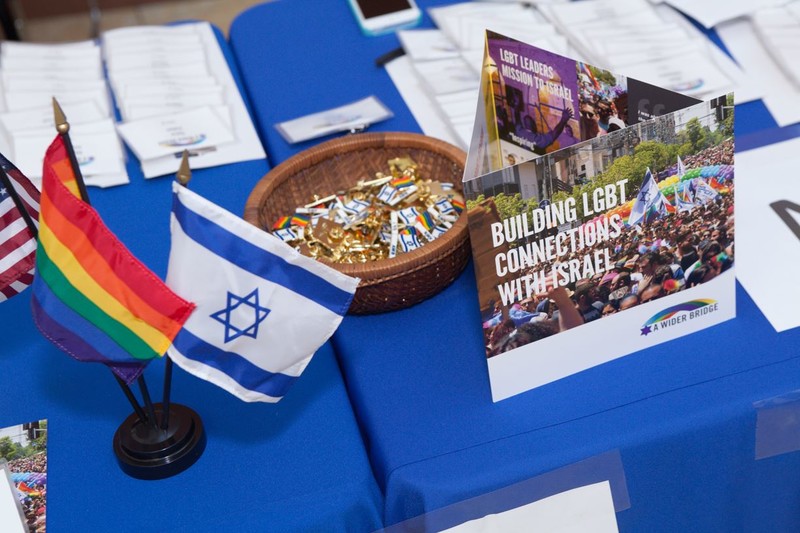 An image posted on A Wider Bridge’s Facebook page highlights the organization’s mission of promoting Israel.

Black Lives Matter Chicago has added its voice to protests over the National LGBTQ Task Force’s inclusion of an Israel lobby group in its Creating Change conference in Chicago this weekend.

Tarab-NYC, an LGBTQ and gender nonconforming group organizing in Middle Eastern and North African communities, launched the #cancelpinkwashing campaign in response to the inclusion of A Wider Bridge.

A Wider Bridge describes itself as a “pro-Israel organization that builds bridges between Israelis and LGBTQ North Americans and allies.”

Among its major donors is the Jewish Federation of Metropolitan Chicago, which has taken a lead in efforts to combat the Palestinian-led boycott, divestment and sanctions movement.

The #cancelpinkwashing campaign’s Facebook page notes that A Wider Bridge partners with the Israeli consulate and the right-wing Israel advocacy organization StandWithUs to put on pinkwashing events which aim to “normalize the occupation of Palestinian land by distracting from the violent, inhumane actions of the Israeli settler state.”

Pinkwashing is a public relations strategy that deploys Israel’s supposed enlightenment toward LGBTQ issues to deflect criticism from its human rights abuses and war crimes and as a means to build up support for Israel among Western liberals and progressives.

On Friday evening, Jewish Voice for Peace Chicago and the Coalition for a Just Peace in Israel-Palestine will host “a Queer, anti-Zionist Shabbat that resists the pinkwashing of Israeli oppression taking place at Creating Change.”

In an online statement, Black Lives Matter Chicago says it endorses Tarab-NYC’s demand that the National LGBTQ Task Force “divest from the violence, ignorance and false ‘inclusion’ of settler-colonial pinkwashing in the name of a ‘wider’ bridge.”

“As They/We all struggle to achieve healing, safety and autonomy in our own lives, families and communities, let us commit to mobilize ourselves and honor the self-determined struggles of Palestine so as to divest from the violence of the occupation,” the statement concludes. “Black and Palestinian Lives depend on it.”

Shortly after that statement was released, the Chicago organization Brown People for Black Power cancelled its scheduled workshop at Creating Change.

It cited both its opposition to pinkwashing and a prior decision to invite the government agency Immigration and Customs Enforcement (ICE) to present at Creating Change.

“There is no ‘constructive dialogue’ to be had about the deliberate genocide of Palestinians, or the detainment of queer and trans people of color,” the group said. “There is nothing good that can come out of the ‘inclusion’ of those who occupy, those who kidnap, those who incarcerate and those who terrorize.”

Kristian Davis Bailey, co-organizer of the ongoing Black for Palestine effort, told me by email that the Black Lives Matter Chicago statement builds on the joint struggle between segments of Black and Palestinian liberation movements.

Davis Bailey noted that the term “They/We” was designed to emphasize “that we can recognize commonalities between our struggles and support each other’s struggles without saying they’re the same.”

This is a point, Davis Bailey said, that is made in the recent Black-Palestinian solidarity video, “When I See Them, I See Us.”

Jason Tompkins, an organizer with Black Lives Matter Chicago, told me that Palestinians and Black people are increasingly subject to similar kinds of state violence.

“We see so much evidence of the same military surveillance technologies and weaponry being deployed against Palestinian civil society, that are now showing up in police departments across the US to wage war against Black communities,” Tompkins said.

Tompkins described Combined Systems and Motorola Solutions as examples of companies that “routinely profit from our death and containment.”

Tompkins also pointed to the millions of tax dollars that US authorities are spending on police body cameras: “Is this going to actually deliver transparency and safety to us?”

“We know that Africana people are part of Palestinian civil society, and have contributed greatly to the struggle against the occupation,” Tompkins stated. “Afro-Palestinians are of course also across the Palestinian diaspora, displaced across the globe.”

“As we deepen the relationship between Black Liberation and Palestinian solidarity work, it is crucial to center Black Palestinian voices, perspectives and experiences,” Tompkins argued.

“The hope is that we can show up for each other as co-resisters and accomplices, and less so under a symbolic ally position,” Tompkins said.

This includes making solidarity statements and honoring calls for support, “but it also requires building collective knowledge about our histories and current struggles.”

“We need to take the hard questions seriously, and continue to build movements that don’t dispose of ‘inconvenient’ people, or leave the most vulnerable constituents of our communities behind,” Tompkins said.

“We already have a stake in each other’s fights, because abolishing anti-Blackness, settler-colonialism, patriarchy and trans-misogyny – everywhere – benefits us all.”