Guests
Diana Buttu — attorney based in Palestine. She has served as a legal adviser to the Palestinians in negotiations with Israel. She was previously an adviser to Palestinian President Mahmoud Abbas.

Gideon Levy — Haaretz columnist and a member of the newspaper’s editorial board. His new article is titled "UN Resolution is a Breath of Hope in Sea of Darkness and Despair." Levy is also the author of The Punishment of Gaza.

Secretary of State John Kerry has blasted Israel’s government, saying in a major address on Wednesday that the relentless expansion of Jewish settlements in the occupied West Bank threatens Israel’s democracy and has all but ended the prospect of a two-state solution with the Palestinians. "If the choice is one state, Israel can either be Jewish or Democratic; it cannot be both," Kerry said. "And it won’t ever really be at peace." Kerry’s speech followed intense Israeli criticism of the U.S. for refusing to veto a Security Council resolution last week. The measure condemns Israel’s expansion of settlements as a flagrant violation of international law. The resolution passed in a 14-0 vote. The U.S. abstained. We speak to Palestinian attorney Diana Buttu and Israeli journalist Gideon Levy, a Haaretz columnist.

This is a rush transcript. Copy may not be in its final form.

JUAN GONZÁLEZ: Secretary of State John Kerry has blasted Israel’s government, saying in a major address Wednesday that the relentless expansion of Jewish settlements in the occupied West Bank threatens Israel’s democracy and has all but ended the prospect of a two-state solution with the Palestinians.

END_OF_DOCUMENT_TOKEN_TO_BE_REPLACED

At this point, the South Africa example is most instructive. Recall the state of that country as the campaign to abolish apartheid built up steam — a privileged white minority ruling a black majority in a violent and brutal system. Economic and trade sanctions gradually beginning to strangle this nation that had historically been Africa’s most prosperous. The arrival of worldwide consumer boycotts, campaigns to sell off stock of any company doing business with this pariah state.

David A. Andelman, editor emeritus of World Policy Journal and member of the board of contributors of USA Today, is the co-author, with the Count de Marenches, head of the DGSE, of “The Fourth World War: Diplomacy and Espionage the Age of Terrorism.” Follow him on Twitter @DavidAndelman. The views expressed in this commentary are his own.

(CNN) — Israel, and by extension the United States, are poised at the entrance to a dangerous path. The model democracy of the Middle East risks transforming into a global pariah on the scale of South Africa when it was in the depths of its apartheid nightmare.

After decades of Arab-Israeli diplomacy, the idea of a one-state solution looms anew, as conservative elements in Prime Minister Benjamin Netanyahu’s coalition see the arrival of Donald Trump and his new ambassador to Israel as an opportunity to push their agenda.

If it is realized, it would reduce Israel’s Palestinian population to a permanent underclass and mean, in the not-too-distant future, that a Jewish minority would be ruling a Muslim majority, with the world on the side of the oppressed majority.

The United States would be its only friend and ally — relegating Washington to a role equally isolated from mainstream opinion throughout the region and far beyond.

This seems to be the role that President-elect Trump is carving out for America, and the role that Netanyahu is skirting perilously close to for Israel.

END_OF_DOCUMENT_TOKEN_TO_BE_REPLACED

“The two-state solution has for decades been the primary focus of efforts to achieve peace in the Israeli-Palestinian conflict. Here’s a basic guide.”

“With few viable or popular alternatives, the most likely choice may be to simply maintain the status quo — though few believe that is possible in the long term.”

Yet Israel has managed for 68 years. — Kevin Walsh 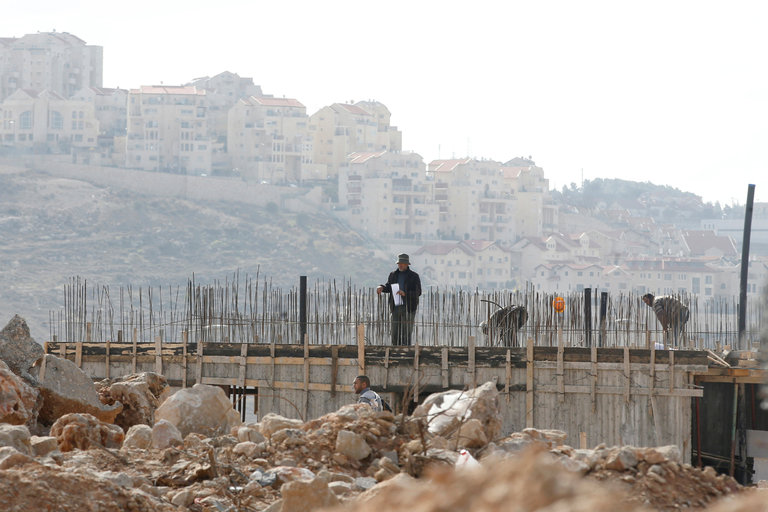 A construction site in the Israeli settlement of Efrat in the West Bank. (Credit: Baz Ratner/Reuters)

Secretary of State John Kerry on Wednesday joined a growing chorus warning that the so-called two-state solution, which he called “the only way to achieve a just and lasting peace between Israelis and Palestinians,” could be on the verge of permanent collapse.

The two-state solution has for decades been the primary focus of efforts to achieve peace in the Israeli-Palestinian conflict, but the contours of what it would actually look like — and why it has been so hard to achieve — can get lost. Here’s a basic guide.

What is the two-state solution?

END_OF_DOCUMENT_TOKEN_TO_BE_REPLACED END_OF_DOCUMENT_TOKEN_TO_BE_REPLACED

By fuming over a U.N. resolution against Israel’s settlements on Palestinian land, Israeli leaders reveal their final solution for the Palestinians – to deny them property rights and displace them.

Danny Danon, Israel’s ambassador to the United Nations, let the theological cat out of the bag.   When the Security Council rebuked Israel for their land thefts (euphemized as “settlements,”) Mr. Danon replied with pious indignation: “Would you ban the French from building in Paris?”

There, in all of it effrontery, is the imperial theology that birthed Zionism. David Ben Gurion said of Palestine “God promised it to us.” Yitzhak Baer wrote in 1947: “God gave to every nation its place, and to the Jews he gave Palestine.”

So in this hallucinatory theology, just as God gave Paris to France the Zionist deity gave Palestine to Jews including the right to build whatever they want wherever they want it. If the Zionist god posted a “Jews only” sign on Palestine, the presence of non-Jews is a sacrilege and their land claims are specious. If nothing is intelligible outside its history, as the Jesuit paleontologist Teilhard de Chardin put it, Ambassador Danon’s French allusion can only be understood against this theological backdrop.

Yigal Allon, a commander of the Palmach, the elite fighting force of the Haganah, the paramilitary force that fought to drive the British from Palestine, did not eschew the language of “cleansing,” a term now used to describe a “crime against humanity.” He boasted that the Zionists were “cleansing” Palestine of Arabs.

END_OF_DOCUMENT_TOKEN_TO_BE_REPLACED

“Resolution 2334 shatters the [Israeli] government-induced illusion that the settlement project has been normalised, that it passed the point of no return, that it is now a fait accompli that will remain unchallenged”

Jerusalem — Israel has responded furiously to a UN security council resolution condemning Israeli settlements in the occupied territories, recalling two of its ambassadors to countries that voted for the motion and threatening to cut aid.

The security council adopted the landmark resolution demanding Israel halt all settlement building and expansion in the occupied territories after Barack Obama’s administration refused to veto the resolution on Friday.

A White House official said Obama had taken the decision to abstain in the absence of any meaningful peace process. The resolution, which passed by a 14-0 vote, was met with loud applause in the packed chamber after the US ambassador, Samantha Power, abstained.

The move was immediately condemned as “shameful” by the office of the Israeli prime minister, Benjamin Netanyahu. A spokesman pointedly referred to Israel’s expectation of working more closely with the US president-elect, Donald Trump.

On Saturday Netanyahu said Israel would reassess its ties with the UN and had ordered a review of the funding of UN institutions and the presence of UN representatives in Israel.

END_OF_DOCUMENT_TOKEN_TO_BE_REPLACED

Israel has bitterly denounced the resolution
They warn it harms, not helps, the peace process

Jerusalem (CNN) — The United Nations Security Council on Friday passed a resolution condemning Israel’s settlements in the West Bank and East Jerusalem. The United States abstained on the resolution, allowing it to pass, rather than vetoing it — as it usually does with resolutions it sees as overly critical of Israel.

Israeli Prime Minister Benjamin Netanyahu summoned the US ambassador and launched a scathing attack Sunday on the Obama administration.

Here are nine questions about the vote at the UN.

1. What are the immediate effects of the UNSC resolution?

The resolution may have no immediate practical effects on Israel, the Israeli-Palestinian conflict, or the peace process. That’s because the resolution is non-binding, effectively creating guidelines and recommendations. The resolution would require follow-up action at the United Nations for it to have an immediate effect.

Israel is concerned about exactly that type of action. Specifically, Israel is worried about a resolution that would set conditions for negotiations. Such a resolution would issue parameters for some of the most sensitive issues in the Israeli-Palestinian conflict, including borders, the status of Jerusalem as a contested capital, Palestinian refugees, and a time-limit for negotiations.

An international peace conference in Paris scheduled for January 15 could be the forum for discussing such a resolution. That would give the international community time to introduce the resolution at the United Nations Security Council before the end of President Barack Obama’s time in office. Israel has vowed not to attend the conference. The Palestinians say they will attend.

2. What are the long-term effects?

The biggest blow is to Israel’s settlement enterprise in the West Bank and East Jerusalem. This resolution has left little room for negotiation about the legality of the settlements, stating that Israel’s settlements have “no legal validity and constitutes a flagrant violation under international law.”

END_OF_DOCUMENT_TOKEN_TO_BE_REPLACED

Mark your calendars for something different: the Freeze for Peace Run sponsored by Colombia Support Network with support from MRSCP, to fund food programs that benefit the citizens of the Peace Community of San Jose de Apartado in Colombia.

If you want to run or walk, you can register online, or print out a form to mail. There is a discount for all registrations received by Jan. 20.

If you can help on the day of the event, please sign up here.

Spread the word to any running (or walking) enthusiasts that you know!

PS — If anyone is interested in participating as a Palestine Team, please let us know; if we have enough people, we’ll set it up!