A growing number of Palestinians want a ‘one state, equal rights’ model and think Trump may unwittingly pave the way for it. 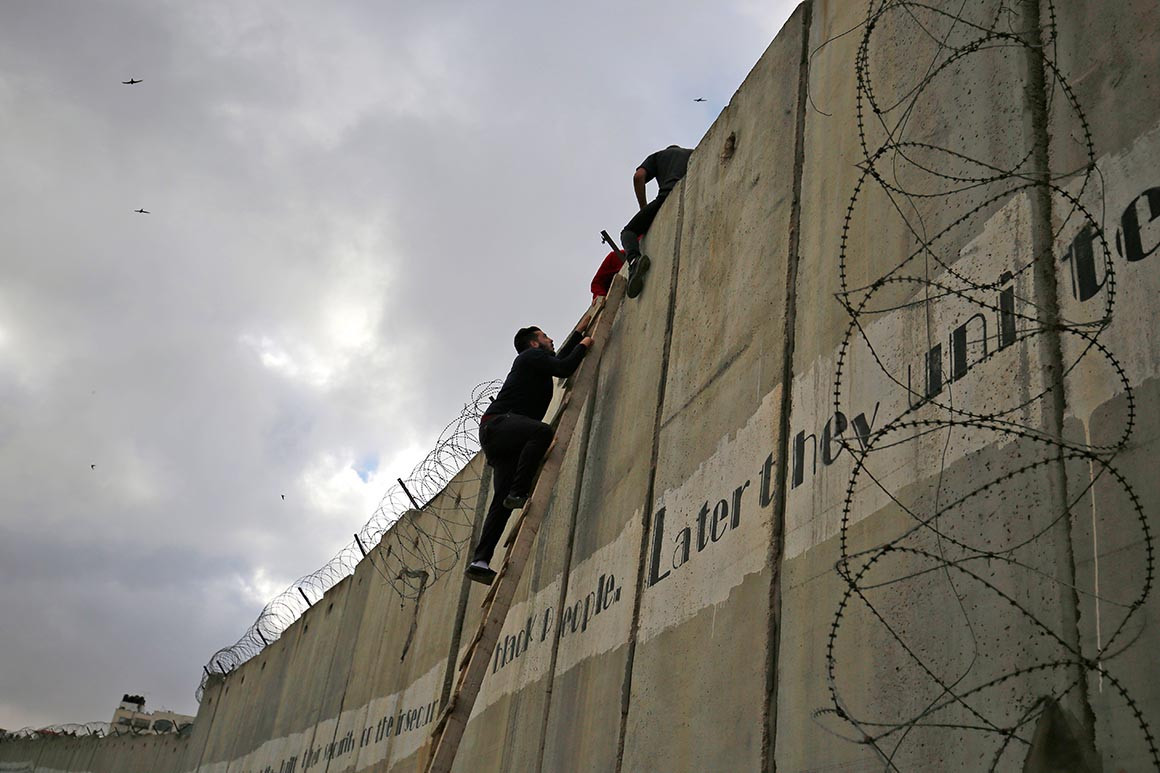 Some prominent Palestinian activists and politicians are quietly rooting for Jared Kushner as he prepares to unveil the first part of his Middle East peace plan next month.

That’s not because they think the plan will resolve their decadeslong conflict with Israel. It’s because they hope it will hasten the onset of a “one-state” solution they are coming to support.

The push for one state with equal rights for Palestinians and Israelis has gained steam in recent years as the Trump administration has been preparing its peace plan, which Kushner, President Donald Trump’s son-in-law and adviser, is expected to unveil at a June conference in Bahrain. Kushner has signaled that his plan abandons America’s decadeslong official support for a “two-state solution,” in which the Palestinians are given a sovereign nation of their own.

Many Palestinian supporters of a single state — whose ranks now include Rep. Rashida Tlaib (D-Mich.), a Palestinian-American — wouldn’t necessarily mind seeing the creation of two independent, full-fledged states in the region. But they don’t consider that outcome realistic, nor do they believe that the international community ever truly backed the idea.

Some argue that due to Israeli actions on the ground, including the construction of settlements in the West Bank, Palestinians already live in a de facto single state, but one in which they lack the same rights as Israeli Jews. Many liken the situation to apartheid South Africa and say Trump’s policies are simply exposing that reality.

“Trump is now not only burying the two-state solution, which was not viable anyway, but he’s gladly dancing on its grave, thus forcing people to end their denial,” said Yousef Munayyer, executive director of the U.S. Campaign for Palestinian Rights. “It’s important for us to respond very clearly that we need equal rights in one state.”

Surrendering the fight for two states could mean short-term pain for Palestinians, one-staters admit. But they hope to draw the world’s attention over time to the implications of one Israeli state in which Palestinians lack full voting and freedom-of-movement rights, bolstering their demands for one state with equal rights for all citizens.

The push for one state with equal rights is also fueled by a series of other strongly pro-Israel actions by Trump, including recognizing Jerusalem as the capital of Israel despite its contested status. If the Palestinians are not given sovereignty, an Israel that absorbs millions of them indefinitely may ultimately be forced to choose between its democratic character and its Jewish identity — especially if demographic growth favors Palestinians.

“I don’t think it’s the intention of Mr. Trump to help Palestinians, but indirectly I think it is [helping]," said Hamada Jaber of the One State Foundation, an organization that launched last year to argue that a single state is actually in the Palestinians’ interest. “There is no two-state solution. It’s pushing us as Palestinians to think about an alternative.”

The growing calls among far left Palestinians and other advocates for “one state, equal rights” comes as Israeli and Palestinian officials acknowledge that the decadeslong efforts at achieving a political solution has stalled, and that the two sides’ respective positions on issues like borders, the status of Jerusalem and the fate of Palestinian refugees may be irreconcilable.

Even so, many close observers of the conflict say, a one state, equal rights approach may prove an even more impractical goal.

“It’s not a real-world solution,” insisted Jeremy Ben-Ami, head of J Street, the left-leaning Jewish advocacy group that supports the two-state model. “It may sound nice in an academic hall. In a real world, this is not going to become one democratic state with equal rights.”

Israeli politicians won’t stand for an outcome in which they could lose political power, critics of the one-state idea say. Then there’s the fact that Palestinian leaders still say they want two separate states. Tensions between Palestinians and Israelis run so deep, some two-staters argue, that they could not coexist peacefully under one government.

Israeli leaders have long blamed the lack of progress in past peace talks on Palestinians, saying they’ve repeatedly refused generous offers that would have helped them create their own state while supporting violence against Israel. The militant group Hamas’ control of the Gaza Strip — from which it launches attacks on Israeli soldiers and civilians — hasn’t helped inspire Israeli confidence in a potential peace deal. 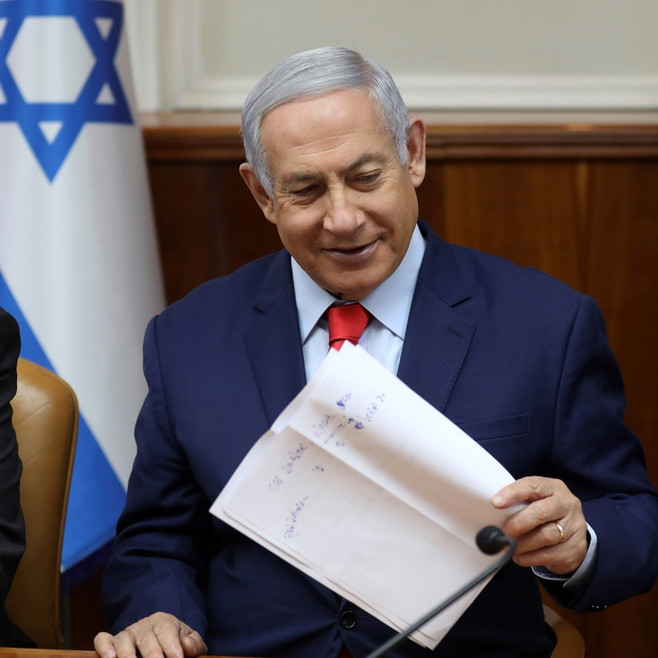 Israeli Prime Minister Benjamin Netanyahu has offered only tepid support for the creation of a Palestinian state. | Gali Tibbon/Pool Photo via AP

Israeli Prime Minister Benjamin Netanyahu has offered only tepid support for the creation of a Palestinian state in the past, and more recently, he’s made statements that seem aimed at derailing that possibility, including reportedly telling Trump that he will not evacuate “a single person” from any West Bank settlements and saying that he might move to annex parts of that territory. The conservative Israeli’s recent reelection led to headlines such as, “Netanyahu won. The two-state solution lost.”

But Israelis say they’re not worried the Trump-Kushner plan will hasten a one-state, equal rights model. “We have confidence in the Trump administration to try and present a plan that will enable Israel to maintain its security interests and on the other hand help improve the life of Palestinians and put an end to this conflict,” an Israeli official told POLITICO.

Officials with the Palestinian Authority did not respond to requests for comment, but they have repeatedly said the Trump administration is not an honest broker. The White House did not provide a comment for this story.

Meanwhile, there are signs that even people traditionally linked closely to the pro-Israel camp are worried about what the Kushner-led proposal will contain.

For instance, Rob Satloff, executive director of the Washington Institute for Near East Policy, has urged the administration to scrap the proposal, arguing it could spur a chain of events that leads to adverse long-term repercussions for Israel’s global standing.

In an interview, Satloff told POLITICO: “It would be a shame if any American initiative advances the idea or contributes to the idea that a single binational state is the solution for the conflict between Israelis and Palestinians.”

Satloff’s stance has drawn attention across Washington. "It’s an interesting world in which people such as Rob Satloff urge the administration not to release a plan that almost certainly will be heavily tilted toward Israel’s position and others more sympathetic to the Palestinian cause are far less alarmed," noted Rob Malley, president of the International Crisis Group.

Malley agreed that the one-state, equal-rights idea is gaining traction in various corners, especially younger Palestinians who seek a more "rights-based discourse.” “I don’t want to overstate it, but there is a shift,” he said.

One prominent supporter is Rashida Tlaib, a newly elected Democratic congresswoman from Michigan who is of Palestinian descent.

Tlaib has been accused of anti-Semitism for some of her remarks, a charge she vehemently denies, and she declined to comment for this story. But in comments last year to In These Times, a progressive publication, Tlaib compared the push for one-state, equal rights to the American civil rights movement.

“It has to be one state,” she said. “Separate but equal does not work.”

Other Middle East observers are not confident that the one state, equal rights camp will prevail.

“The idea that you’ll end up with [an] apartheid state and it’ll eventually raise sympathy: This is too linear a view of history,” said Ghaith al-Omari, a former Palestinian Authority official now with the Washington Institute. He and others stressed that they’re trying to keep an open mind about the Trump peace proposal given that very few people know its contents.

Early on in his presidency, Trump casually tossed aside decades of official U.S. support for a two-state solution, declaring that he “can live with either” a one-state or two-state solution so long as Palestinians and Israelis agree.

More recently, Secretary of State Mike Pompeo, when pressed by lawmakers, declined to say whether the U.S. still supports a two-state solution. Kushner, meanwhile, said the peace proposal will not include the phrase “two-state solution.”

From what little Kushner and his team have revealed, the specifics appear focused more on economic matters than political rights. The first phase of the plan is expected to be rolled out in Bahrain in late June at an “economic workshop” that will convene business leaders among others to discuss ways to help improve Palestinian lives materially.

Trump administration officials say the plan will also cover political issues, including sensitive topics such as borders, but have not offered a time frame for revealing those details.

The release of the plan, which at one point was around 50 pages, according to a Western diplomat, has been delayed several times.

During that time period, Trump has taken several steps that appear to undercut Palestinian hopes for their own state while pressuring them to come to the negotiating table, including by declaring Jerusalem as Israel’s capital, a cutoff of financial aid to the Palestinians and recognition of sovereignty over the Golan Heights.

Trump administration officials have also not contested Netanyahu’s recent suggestion that he will move to annex parts of the West Bank, home to millions of Palestinians.

Palestinian activists say that move would clearly signal that Israeli leaders have given up on a Palestinian state.