“It’s going to be a giant sign up by the door of the Jewish state: ‘Don’t come unless you agree with everything we’re doing here.’ I don’t know what kind of democracy makes that statement.” 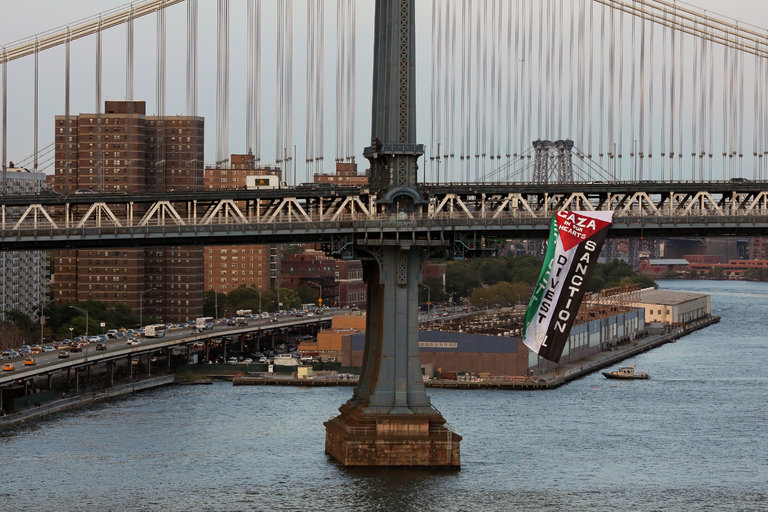 A banner calling for the boycott, divestment and sanctioning of Israel hanging from the Manhattan Bridge in New York during a protest against Israel’s military campaign in Gaza in 2014. (Michael Appleton for The New York Times)

Israel’s Parliament has struck back at the international boycott movement against the country and its settlements in the West Bank by passing a law barring entry to foreigners who have publicly supported the movement.

The measure, passed on Monday night, received little notice in Israel, but by Tuesday it set off alarms in the United States, where Israel’s critics and some of its most loyal Jewish supporters alike warned that it would further isolate the country.

Rabbi Rick Jacobs, the president of the Union for Reform Judaism, the largest Jewish movement in North America, said in a telephone interview from Jerusalem: “It’s going to be a giant sign up by the door of the Jewish state: ‘Don’t come unless you agree with everything we’re doing here.’ I don’t know what kind of democracy makes that statement.”

The vote came as the Israeli government’s right flank has been emboldened by the election of President Trump and his warm welcome in Washington last month of Prime Minister Benjamin Netanyahu. The bill passed the Parliament, or Knesset, 46 to 28, with proponents calling it a common-sense measure to exclude “haters,” and opponents warning that it would backfire and encourage further boycotts.

With hopes for a two-state solution between Israel and the Palestinians vastly diminished, Palestinians and their supporters have been advocating a strategy called B.D.S.: boycott, divestment and sanctions. The movement has been most active in Europe and the United States, and supporters have compared it to the campaign against apartheid in South Africa — an analogy fiercely disputed by defenders of Israel.

Academic groups, artists, churches and companies from many countries are boycotting or divesting from Israel, or from the occupied territories in the West Bank. The Israeli government and other critics say the boycott movement is anti-Semitic and aims to undermine Israel’s right to exist.

Bezalel Smotrich, a member of the Knesset who is a co-sponsor of the bill to bar entry to boycott supporters, said: “We will now stop turning the other cheek. Preventing B.D.S. supporters who come here to hurt us from the inside is the very least we should be doing against haters of Israel.”

Dov Hanin, who voted against the legislation, said that at a time when boycotts against settlements are being promoted around the world, the law “is really a law to boycott the world.”

“A country that boycotts the world is basically isolating and boycotting itself,” he continued.

Israel has already turned away some travelers for political reasons. Last December, Isabel Phiri, a theologian and an assistant general secretary of the World Council of Churches in Geneva, was refused entry after landing in Tel Aviv with a tourist visa. Last July, five Americans on a fact-finding trip were detained, questioned and deported, with Israeli officials citing security reasons.

And in February, an American executive with the New Israel Fund, a liberal group, was detained and interrogated at the Tel Aviv airport by an interviewer holding a document that said “BDS.” The fund does not support the movement.

The new law says it applies to any foreigner “who knowingly issues a public call for boycotting Israel” and is aware that this “has a reasonable possibility of leading to the imposition of a boycott.”

Eytan Fuld, a spokesman for Mr. Smotrich, said there was no “blacklist” of individuals. He said the law would apply to “known organizations” and their “main activists.”

“It’s redefining as an enemy of Israel anyone who does not agree that the settlements are now and forever will be part of Israel,” said Lara Friedman, the director of policy and government relations for Americans for Peace Now. “That’s going to be problematic for a lot of American Jews who care about Israel. It’s just heartbreaking.”

Rabbi Jacobs said the law would deter the kinds of people he often brings to Israel, those who have questions about its policies and should see the country for themselves.

The Reform Jewish movement opposes the expansion of settlements, but is strongly opposed to the B.D.S. movement, and has tried to dissuade several American church groups from passing divestment resolutions.

“If it’s perceived that Israel doesn’t want to engage in serious debates with diaspora Jews,” he said, “I think that really is a weakening of our relationship.”

But Naftali Bennett, the leader of the right-wing Jewish Home party and Israel’s education minister, said the new law was “logical and expected” and will allow Israel to defend itself against those “who wish it harm.”