Palestinians were never presented with what Israel offered every neighboring country: full withdrawal from occupied territory 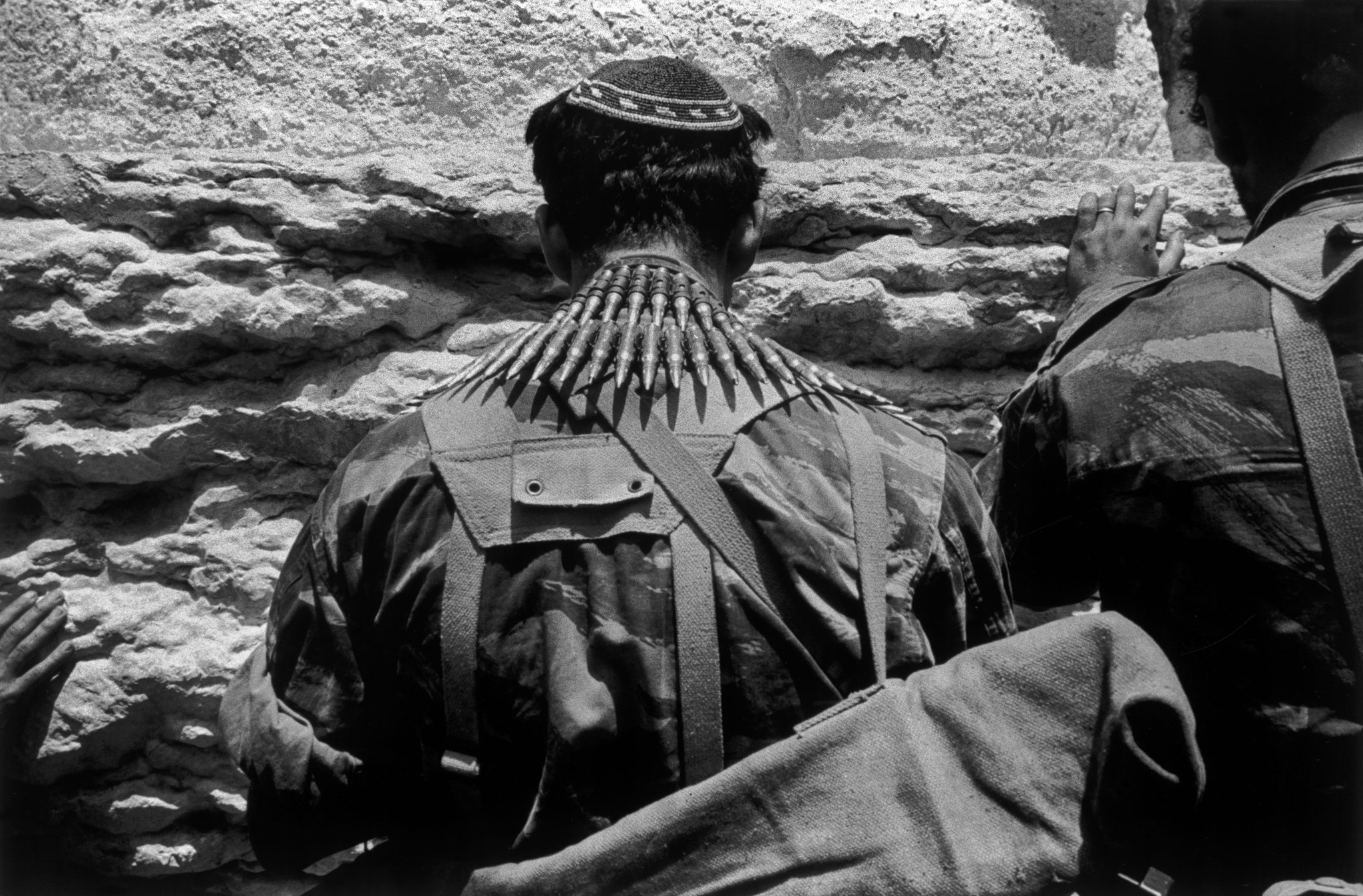 An Israeli soldier praying at the Western Wall during the Six-Day War, in June 1967 (Micha Bar Am/Magnum Photos)

JERUSALEM — Three months after the 1967 war, Israel’s ruling Mapai Party held a discussion on the future of the newly conquered territories. Golda Meir, who would become Israel’s leader a year and a half later, asked Prime Minister Levi Eshkol what he planned to do with the more than one million Arabs now living under Israeli rule.

“I get it,” Mr. Eshkol jokingly replied. “You want the dowry, but you don’t like the bride!” Mrs. Meir responded, “My soul yearns for the dowry, and to let someone else take the bride.”

On this 50th anniversary of the war, it is clear that over the half-century that followed, Israel managed to fulfill Mrs. Meir’s wish, keeping control of the land indefinitely without wedding itself to the inhabitants. This resilient and eminently sustainable arrangement, so often mischaracterized as a state of limbo assumed to be temporary, has stood on three main pillars: American backing, Palestinian weakness and Israeli indifference. Together, the three ensure that for the Israeli government, continuing its occupation is far less costly than the concessions required to end it.

Each pillar, in turn, draws support from a core myth promoted by leaders in American, Palestinian or Israeli society. For Americans, the myth that the occupation is unsustainable is a crucial element in maintaining and excusing the United States’ financial and diplomatic abetting of it. From the halls of the State Department to editorials in major newspapers and the pronouncements of pro-peace organizations like J Street, Americans are told that Israel will have to choose, and very soon, to give Palestinians either citizenship or independence, and choose to either remain a democracy or become an apartheid state.

Yet none of these groups calls on the United States to force this supposedly imminent choice, no matter how many times Israel demonstrates that it prefers a different, far easier option — continued occupation — with no real consequences. The only real fallout from continued occupation are major increases in American financing of it, with Israel now receiving more military assistance from the United States than the rest of the world does combined. Mistaking finger-wagging for pressure, these groups spend far too much time on phrasing their criticism of settlements and occupation, and far too little asking what can be done about it.

What supports the fiction that Israel cannot continue subjugating the Palestinians — and therefore that the United States will not be complicit in several more decades of subjugation — is a seemingly endless parade of coming perils, each of which, it is claimed or hoped, will cause Israel to end its occupation in the near future.

Initially, the threat was of an attack by the Arab states. But that soon crumbled: Israel made a separate peace with the strongest one, Egypt; the Arabs proved incapable of defending even sovereign Lebanon from Israeli invasion; and in recent years, many Arab states have failed to uphold even their longstanding boycott of Israel.

Then there was the demographic threat of a Palestinian majority arising between the Jordan River and the Mediterranean. But official Israeli and Palestinian population statistics indicate that Jews have been a minority in the territory Israel controls for several years now, and with no repercussions: A majority of the world’s nations still speak of undemocratic rule by a Jewish minority as a hypothetical future, not an unacceptable present. 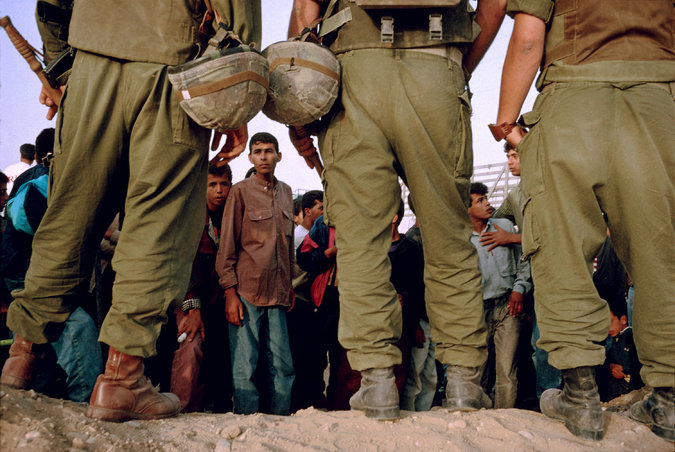 Later came the threat of renewed Palestinian violence. But Israel, with the strongest army in the region, has repeatedly demonstrated that it can endure and outlast whatever bursts of resistance the divided and exhausted Palestinians can muster.

The next threats, too, came up empty. The rise of nominally pro-Palestinian powers like India and China has, to date, had no negative effect on Israel, which has strengthened ties with both countries. The Boycott, Divestment and Sanctions movement, though noisy on some American campuses, has yet to make a dent in Israel’s economy or its citizens’ self-reported level of life satisfaction, among the highest in the world.

Advocacy among some Palestinian intellectuals and their allies for enfranchisement in a single state, the so-called one-state solution, has not been endorsed by a single Palestinian faction and is a long way from drawing majority support in the West Bank and Gaza. If the proposal ever gathered momentum, Israel could easily counter it by withdrawing from the West Bank, as it did from Gaza in 2005.

The latest, though surely not the last, in this list of threats is the prospect of political changes within America and its Jewish community. Israel has become a more partisan issue, and polls show a majority of Democrats in favor of some economic sanctions or other action against Israeli settlements. Among American Jews, a growing rate of intermarriage with gentiles is lessening attachment to Israel, and Jewish organizations are increasingly divided over support for the country. Despite such vexation, mainly among liberal Jews, surveys over nearly four decades have shown overall American backing for Israel over the Palestinians only increasing, and none of the hand-wringing has translated into changes in American policy.

For American politicians, electoral and campaign finance incentives still dictate a baseline of unconditional support for Israel. The United States has given more than $120 billion to the country since the occupation began, spent tens of billions of dollars backing pro-Israel regimes ruling over anti-Israel populations in Egypt and Jordan, and provided billions more to the Palestinian Authority on condition that it continue preventing attacks and protests against Israeli settlements. And those expenditures do not reckon the cost to American security interests of Arab and Muslim resentment toward the United States for enabling and bankrolling the oppression of Palestinians in Gaza and the West Bank.

For the most part, the Palestinians themselves have done much to support the status quo. The myth upheld by leaders of the Palestinian government is that cooperating with Israel’s occupation — which, in fact, makes the occupation less costly, more invisible to Israelis and easier to sustain — will somehow bring it to an end. This will happen, the theory goes, either because Palestinian good behavior will generate pressure from the contented Israeli public or because Israel, once deprived of excuses, will be forced by the United States and the international community to grant Palestinians their independence.

This is the myth underlying the continued support of the Oslo arrangements long after they were set to expire in 1999. It was also the basis for the two-year plan of former Prime Minister Salam Fayyad to build the institutions of a Palestinian state, and for the 12 years of quiescence and close security cooperation with Israel under President Mahmoud Abbas in the West Bank.

A counterpart to this myth, propounded by Israeli officials and regurgitated by American policy makers, is that Israel will not make concessions if pressured but will do so if it is warmly embraced. The historical record demonstrates the opposite.

Severe pressure from the United States, including the threat of economic sanctions, forced Israel to evacuate Sinai and Gaza after the 1956 Suez crisis. It also compelled Israel to commit to a partial Sinai pullout in 1975. It made Israel acquiesce to the principle of its withdrawal from territories occupied in the 1967 war, including the West Bank, in the 1978 Camp David accords. And it obliged Israel to reverse its incursions into southern Lebanon in 1977 and 1978.

By the same token, it was Palestinian pressure, including mass demonstrations and violence, that precipitated every Israeli withdrawal from Palestinian territory. Prime Minister Yitzhak Rabin, who agreed to the first Israeli pullouts from parts of the West Bank and Gaza, made his initial proposals for Palestinian self-government in 1989, when he was the defense minister attempting to quash the first intifada. Even Yitzhak Shamir, then the prime minister and a vehement opponent of ceding territory to the Arabs, put forward an autonomy plan for Palestinians later that year.

As the intifada developed into an increasingly militarized conflict in 1993, and Israel sealed off the occupied territories in March that year, Israeli negotiators held secret meetings with Palestinians near Oslo. There, they asked for an end to the intifada and soon agreed to evacuate the military government and establish Palestinian self-rule. In 1996, the clashes and riots known as the tunnel uprising led directly to Prime Minister Benjamin Netanyahu’s promise to negotiate a withdrawal from most of Hebron, which Israel formally committed to do several months later.

During the second intifada, rocket attacks from Gaza increased sevenfold in the year before Prime Minister Ariel Sharon announced Israel would evacuate. (According to Israel’s talking point, the army pulled out and got rockets; in fact, it was already getting rockets before it pulled out.) Shortly after the Gaza disengagement and the close of the intifada, a plurality of Israelis voted for the Kadima Party, led by the acting prime minister, Ehud Olmert, who ran on a platform of withdrawing from the roughly 91 percent of the West Bank that lies east of the separation barrier.

As bloodshed diminished, though, Israel’s sense of urgency about the Palestinian problem dissipated. No serious proposals for unilateral withdrawal were made again until the level of violence in the West Bank and Jerusalem escalated in late 2015.

Finally, for Israel, the most pervasive myth is that there is no Palestinian partner for peace. Palestinians are irredeemably rejectionist, runs this argument; they will not give up on their impossible goals and have never made real compromises, in spite of every generous Israeli proposal. The truth is that the history of the Palestinian national movement is one long series of military defeats and ideological concessions. Each of those slowly moved the Palestine Liberation Organization from rejection of any Israeli presence to acceptance and recognition of Israel on the pre-1967 lines, compromising 78 percent of historic Palestine. For years, the international community bullied and cajoled the P.L.O. to accept a Palestinian state in the West Bank and Gaza, the remaining 22 percent.

When the P.L.O. finally did so, in 1988, the rug was pulled out from under it. Palestinians woke up to find that 22 percent of the homeland had been redefined as their new maximalist demand. Shimon Peres was among the few Israeli leaders to recognize the magnitude of the Palestinians’ concession. He called it Israel’s “greatest achievement.”

In the last quarter-century of intermittent American-led negotiations, the powerlessness of the Palestinians has led to still further concessions. The P.L.O. has accepted that Israel would annex settlement blocs, consented to give up large parts of East Jerusalem, acknowledged that any agreement on the return of Palestinian refugees will satisfy Israel’s demographic concerns and agreed to various limitations on the military capabilities and sovereignty of a future state of Palestine.

During that time, Palestinians were never presented with what Israel offered every neighboring country: full withdrawal from occupied territory. Egypt obtained sovereignty over the last inch of sand in Sinai. Jordan established peace based on the former international boundary, recovering 147 square miles. Syria received a 1998 proposal from Prime Minister Netanyahu (on which he subsequently backtracked) for a total evacuation from the Golan Heights. And Lebanon achieved a withdrawal to the United Nations-defined border without granting Israel recognition, peace or even a cease-fire agreement.

The Palestinians, though, remain too weak, politically and militarily, to secure such an offer, and the United States and the international community won’t apply the pressure necessary to force Israel to make one. Instead, the United States and its allies pay lip service to the need to end the occupation, but do nothing to steer Israel from its preferred option of perpetuating it: enjoying the dowry, denying the bride.