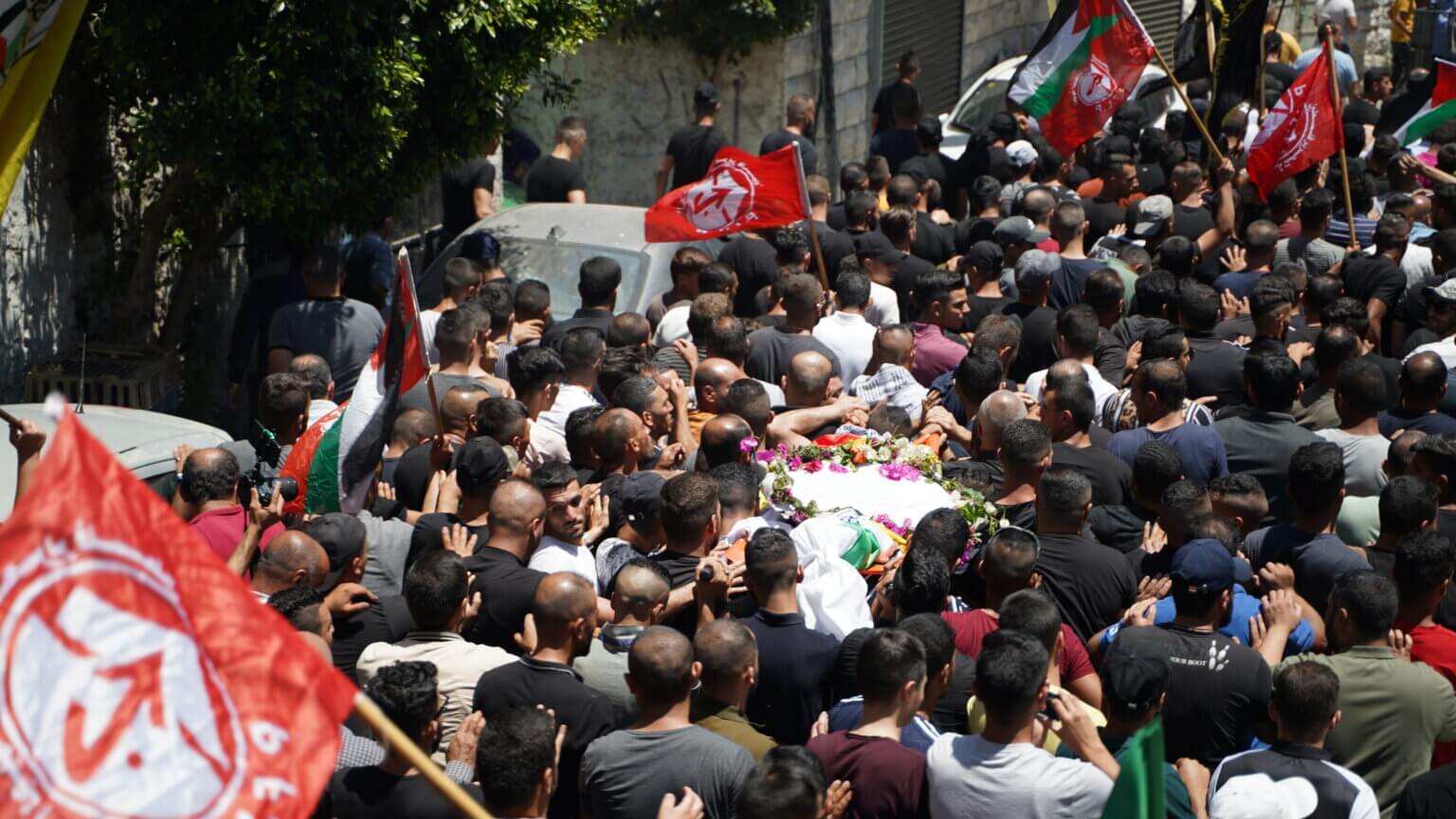 Moayyad pulled the car over and exited his vehicle, but when he did so, he collapsed. “I lost control of my body, I couldn’t get up,” he said. “People around me were asking me what was wrong, and all I could say was ‘they shot him, they shot Mohammed!’”

26-year-old Ahmed Sleibi was one of those bystanders.

“I was in the area attending another funeral, and I was shocked to see the father on the ground screaming and crying,” Sleibi said. “Myself and some other bystanders quickly rushed to his car. It was completely riddled with bullet holes.”

“We opened the backdoor of the and found the boy in a pool of blood,” Sleibi recounted. “His little sister was holding him in shock trying to wake him up, and his little brother was on the floor crying.”

“I cannot describe what it was like to witness this,” Sleibi said. “I was the ugliest of crimes. I am a former prisoner.  I have seen prisoners, martyrs, and injured people. But something like this, I have never seen before in my life.”

Sleibi said that what stuck with him the most was the sight of the family’s groceries still in the back seat with the kids, covered in Mohammed’s blood.

“The bread was soaked with the boy’s blood. His blood was on the bread,” he said. “I don’t know what else to say. I can’t describe it.”

Mohammed al-Alami succumbed to his wounds on Wednesday evening, a few hours after he was transferred to a hospital in Hebron, making him the 11th Palestinian child to be killed by Israeli forces in the West Bank in 2021, and the third in just one week.

Shortly after Mohammed’s funeral, Israeli forces shot and killed another Palestinian from Beit Ummar, identified by the Palestinian Ministry of Health (MOH) as 20-year-old Shawkat Awad. 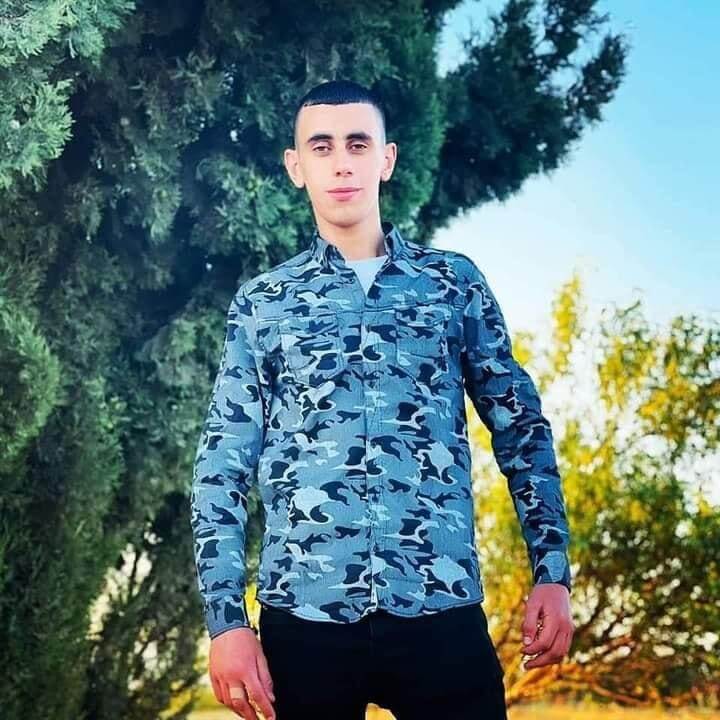 Shawkat Awad, 20, was killed by Israeli forces during protest that erupted after soldiers attacked the funeral procession of Mohammed al-Alami, who was killed one day prior in the town of Beit Ummar. (Photo: Wafa News Agency)

According to the MOH, Awad was shot in the head and the stomach, and was in critical condition in the hospital for hours before he succumbed to his wounds on Thursday night.

Awad was shot during protests that broke out at the entrance to Beit Ummar after Mohammed’s funeral, after Israeli forces attacked the funeral procession.

Eyewitnesses told Mondoweiss that as the procession was approaching the cemetery, Israeli forces began firing at the crowds “out of nowhere,” shooting tear gas and rubber bullets at people.

In the clashes that ensued after Mohammed’s funeral, the PRCS said that Israeli forces shot 12 Palestinians with live ammunition, including Awad.

“All I wanted to do was bury my son in peace after they stole him from me,” an agonized Moayyad al-Alami told Mondoweiss.

“They killed my boy, and then they wouldn’t even let me bury him,” al-Alami said. “That is my most basic right as a father, and they took that from me too.”

‘They wanted to kill us all’

The Israeli army claimed in a statement that the reason they fired at al-Alami’s van was because soldiers “had identified suspects leaving a vehicle near a military outpost and digging a hole in the ground. In the hole, the soldiers found a dead baby wrapped in a plastic bag and suspected al-Alami’s family car which was driving nearby,” Haaretz reported.

Moayyad al-Alami, along with other eyewitnesses to the shooting, heavily disputed the army’s claims, however.

“A family in the town had gone to bury their newborn baby who passed away in the town’s cemetery, which is right next to the base,” Sleibi told Mondoweiss. “There was nothing suspicious about it. No one was discarding the baby as they claimed.”

As for the claims that the soldiers “followed the rules of engagement” and fired multiple warning shots before firing at the al-Alami’s vehicle, Moayyad al-Alami himself, as well as several other eyewitnesses say those claims are just not true.

“There were no warning shots or attempts to stop the vehicle in any other way,” al-Alami’s brother Ashraf, who witnessed the shooting while he was standing at the entrance to his family’s home.

“They just started firing bullets at the vehicle from all directions,” he said.

Moayyad al-Alami’s version of events was similar to that of his brothers and other witnesses, adding that even if the soldier’s suspected him of wrongdoing, there was no reason to shoot at the car as they did.

“It wasn’t one or two bullets. Mohammed was shot with five bullets!” he cried. “We found 13 bullet casings in the car. Under what circumstances would they need to fire that many bullets at the car?” he asked.

“They were trying to kill everyone who was in that car,” he said. “It is obvious they weren’t trying to stop the car or scare me. They wanted to kill us all.”

“It’s a miracle that all of us weren’t killed yesterday.”

‘Our kids are being killed in cold-blood’ 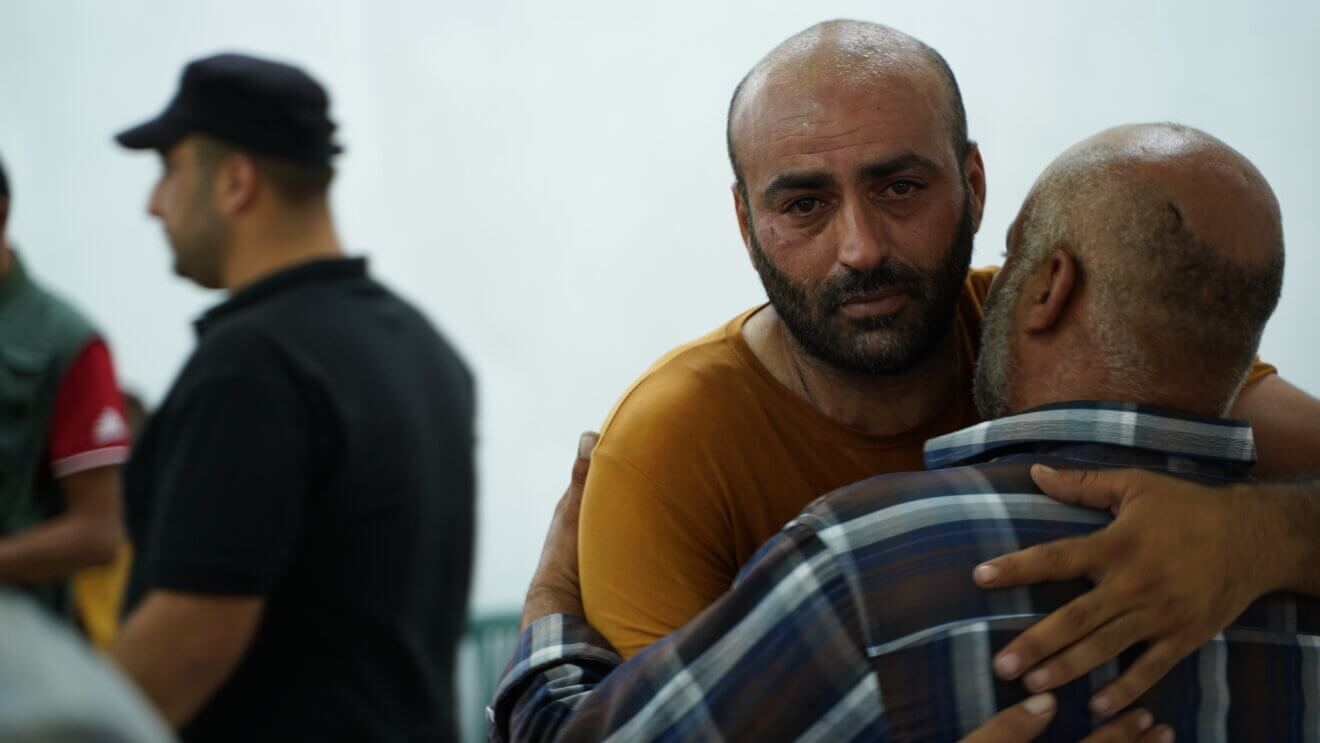 Moayyad al-Alami greets mourners at his son’s wake. His 11-year-old son Mohammed was shot and killed by Israeli forces while the family were in their car on the way home from grocery shopping in their town of Beit Ummar. July 29th, 2021 (Photo: Akram al-Waara)

As hundreds of people poured into the community center to pay their respects to al-Alami and his family, all he could think about was his children, and his new baby on the way.

“Mohammed was our miracle,” he said, adding that for the first seven years of their marriage, he and his wife struggled to get pregnant.

“When we finally had Mohammed, it was like a dream come true,” he said. “He was my pride and joy. I loved giving him everything he wanted, because I loved him so much. That’s why when he asked me to turn around to go buy snacks, I didn’t even hesitate.”

“He was my whole world, and they took him from me in just a second.”

Al-Alami said that on top of mourning his son Mohammed, he’s worried about his other children, Anan and Ahmed, who he says are still in a complete state of shock.

“They saw their brother die in front of them. Anan held him in her arms as he died. How are they supposed to live with that?” he asked.

Al-Alami said that the only ones responsible for Mohammed’s death were the Israeli army, and the Israeli occupation.

“The world needs to do something! You see Palestinian children are being killed, and you are doing nothing!” Moayyad al-Alami

“While your kids are playing in their parks and gardens, and traveling around the world, Our kids can’t even leave the house without getting killed.” he said. “Our kids are being killed in cold blood.”