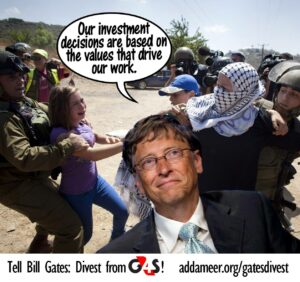 3 April 2014, Occupied Ramallah – Addameer and the Palestinian Boycott, Divestment and Sanctions National Committee call on campaigners and people of conscience to take action Palestinian prisoner’s day on April 17 to stand in solidarity with Palestinian political prisoners.

The Bill and Melinda Gates foundation, the biggest charitable foundation in the world, owns shares in Israeli prison contractor G4S worth more than $170m. Join us in calling on them to divest their shares!

Over 5,000 Palestinians are currently held in Israeli prisons, including 183 children and 175 held under administrative detention, a form of detention without trial that Israel uses to hold Palestinians indefinitely on secret information.

Each year the Israeli military arrests thousands of Palestinians in an attempt to suppress any resistance to its continued occupation and apartheid policies. Among these are hundreds of children as young as 12 years old. In too many cases Palestinian children are tortured, ill-treated, placed in solitary confinement and coerced into signing a confession in Hebrew, a language which most Palestinian children do not understand. Every year approximately 1,000 children are sentenced in Israeli military courts.

Night raids are the most common form of arrest, during which Israeli soldiers will ransack an individual’s house, destroying personal property and abusing physically abusing family members. The arrested person will then be handcuffed and blindfolded before being thrown into the back of an Israeli military jeep, face-down, where the beatings, insults and humiliation will continue.

Under Israeli military law, Palestinians can be interrogated for a period of 90 days and denied access to a lawyer for the first 60 days. Since 1967, 73 Palestinian detainees have died as a result of torture while under Israeli interrogation, the most recent of which was Arafat Jaradat, who was tortured to death in a G4S-secured interrogation centre in February 2013.

We urge people to take action on Palestinian prisoner’s day on April 17 to stand in solidarity with the struggle of Palestinian political prisoners.

Two years ago, on the eve of the mass hunger strike by more than 2,000 Palestinian political prisoners, Addameer and other Palestinian organisations called for a campaign against G4S, the British security company that runs and providessecurity services and equipment at Israel’s prisons.

As part of the rapidly growing boycott, divestment and sanctions (BDS) movement, campaigns against G4S are now underway in more than a dozen countries. Universities, banks, charities and trade unions across the world havecancelled contracts with G4S because of its role in Israel’s abhorrent prison system, costing G4S millions of dollars. Feeling the pressure, G4S has tried to make statements distancing itself from Israel’s prison system.

The Bill and Melinda Gates foundation, the biggest charitable foundation in the world, owns shares in G4S worth more than $170m.

The Gates Foundation says that it is “guided by the belief that every life has equal value” and that it uses its investments to fund projects that “help all people lead healthy, productive lives”. But through its holdings in G4S, the Gates Foundation is legitimising and profiting from Israel’s use of torture and mass incarceration.

This Palestinian political prisoner’s day, join Addameer in putting pressure on the Gates Foundation to divest from G4S.

Send an email to info@addameer.ps to let us know about any actions you are planning.