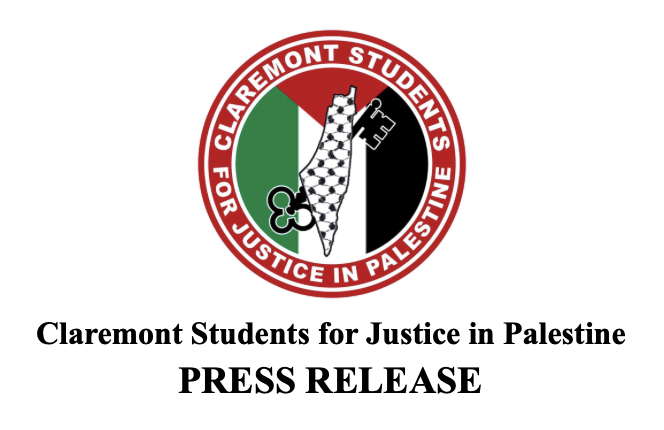 RE: BDS Victory: ASPC To Divest Funds From Occupation of Palestine
Contact: Claremont Students for Justice in Palestine
claremontcollegesjp@gmail.com

We are pleased to announce that the Associated Students of Pomona College (ASPC) unanimously passed a resolution on Thursday, April 22, 2021 divesting all ASPC funds from companies complicit in the occupation of Palestine, and banning future use of funds towards such companies[1]. This is an important victory at Pomona College and sets a strong precedent for future solidarity work at Pomona and the other Claremont Colleges in support of the Palestinian liberation movement, and the Boycott, Divestment, Sanctions movement in particular. SJP is deeply grateful to ASPC for their support, and additionally thanks the 23 Claremont Colleges student organizations that joined our coalition in support of ASPC divestment from the occupation of Palestine.

Claremont SJP, alongside Claremont Jewish Voice for Peace, introduced this resolution to stand in material and ideological solidarity with Palestinians struggling for their freedom from Israeli apartheid, occupation, and oppression. This action heeds the 2005 BDS call by Palestinian civil society organizations to boycott, divest from, and sanction Israel, “until it complies with international law and universal principles of human rights.” This resolution enacts the divestment of funds under ASPC’s control from the UN Human Rights Council’s list of 112 companies “involved in certain specified activities related to the Israeli settlements in the Occupied Palestinian Territory” (A/HRC/43/71). The resolution also “calls upon the other Claremont Colleges Student Government Associations to follow suit, with an ultimate adoption of a consortium-wide agreement to not allow clubs to use their student government allocations to knowingly invest or spend their funds of items that contribute to further encroachment into Palestinian occupied territories by the UN-designated companies or the Israeli state, or face the loss of ASPC funding.” Claremont SJP reiterates this call to action to the other Claremont College Student Government Associations to pass a similar resolution.

This resolution is by no means the end of the Pomona College and Claremont Consortium community’s responsibility to push for total divestment from the Israeli occupation of Palestine. Adopting this amendment is an important first step in reducing our complicity with a country that maintains an illegal military occupation and regularly commits crimes against humanity against the indigenous Palestinian population. As students at Pomona College and the Claremont Colleges, we recognize that our tuition dollars are being used to support companies which directly profit from the ongoing dispossession and oppression of Palestinians.

Claremont Students for Justice in Palestine is committed to standing up against our colleges’ complicity in supporting companies and organizations that serve to benefit from continued violence on behalf of the state of Israel. We will continue working to build a movement in solidarity with the liberation of Palestinians and all oppressed people in the US and around the world. The final copy of the newly adopted ASPC bill can be found here.

Claremont Students for Justice in Palestine