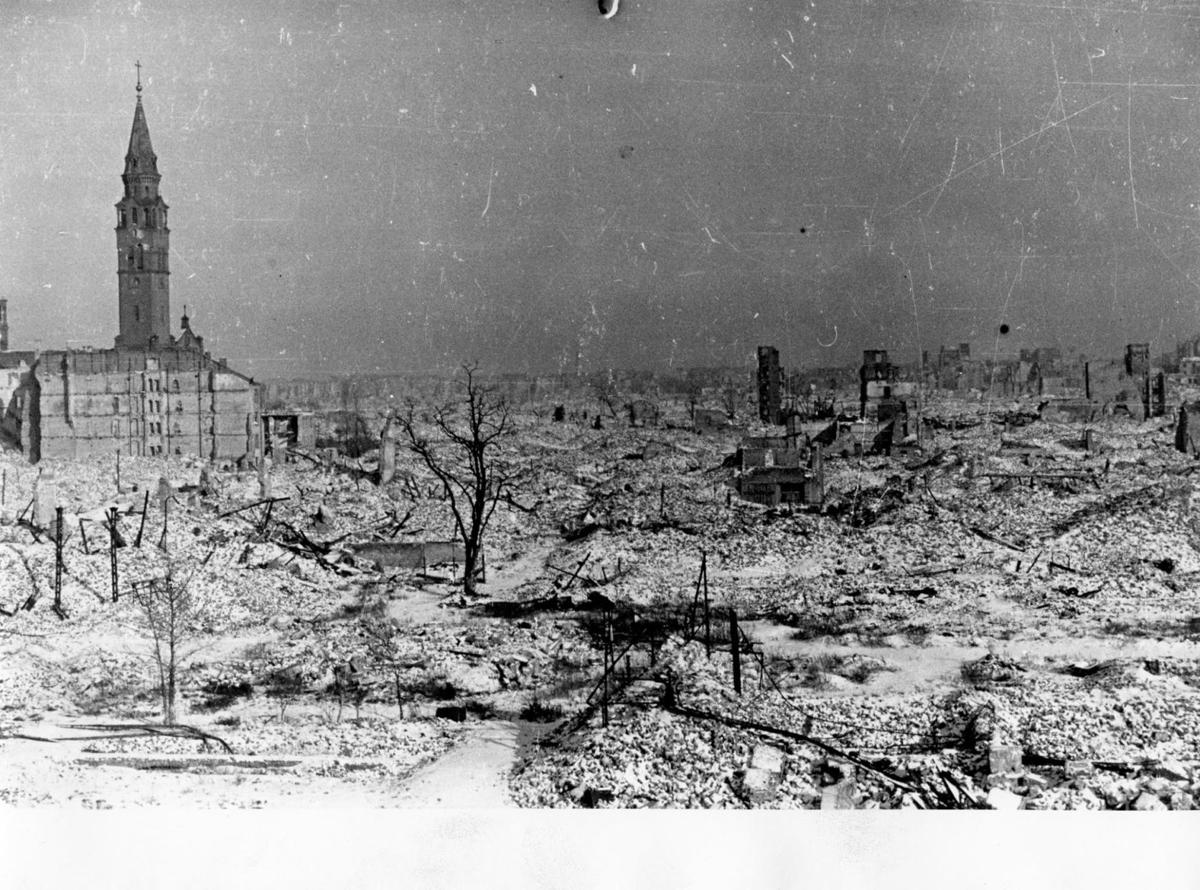 The Warsaw Ghetto was liquidated and burned to the ground by Nazi soldiers in May 1943 in response to Jewish resistance to the mass extermination of the Jews of Warsaw. (PHOTO BY STANISLAW PAWELEK)

The bitterly ironic confluence of the personal and political, of past and present, is pressing down on me so hard I cannot stop shaking in grief and anger. Whatever you think about the right of the State of Israel to exist or the long horrible history of hatred and violence in the Middle East, what is happening in Gaza is a humanitarian crisis. Israel and the United States are on the wrong side of history and humanity. It is painful to acknowledge but, with the occupation of Gaza and current violence against Palestinians by the Israeli army, Jews have shifted from being oppressed freedom fighters to military occupiers and I have to say NOT IN MY NAME.

I usually think about my family history and being Jewish on May 16 because most of my mother’s and father’s extended family lived in Warsaw, Poland, during World War II. May 16, 1943, was the day the Nazis slaughtered the remaining Jews of the Warsaw Ghetto after their desperate attempt at resistance failed.

May 16 marks the 75th anniversary of the end of the Warsaw Ghetto Uprising, a still-not-widely-known act of Jewish resistance in German-occupied Poland. In 1939, when the Nazis began to force Poland’s population of over 3 million Jews into crowded ghettos, my parents and their families were among the 300,000–400,000 people packed into a small walled-off area of Warsaw guarded by soldiers and surrounded by barbed wire.

Dozens of my extended family lived in a small apartment meant for one family without enough food, water, or heat. Germans controlled who could enter and leave the ghetto, who could work and at what jobs, what goods, food, and medical supplies could come in, and virtually every aspect of daily life. They humiliated, tormented, and killed Jews at will. Thousands of Jews died from disease and starvation. My paternal grandfather died of typhus.

My maternal grandfather was beaten to death by German soldiers. My maternal grandmother and most of her large extended family were rounded up and sent by train to the Treblinka death camp where they were likely immediately gassed and dumped in an unmarked grave.

When it became clear that the transport trains were not bringing Jews from the ghetto to “relocation camps” but to extermination camps, Jews began to fight back. Their resistance culminated in an uprising which began on April 19, 1943, the first night of Passover. A ragtag group of adults and children with nothing to lose fought back against Nazi Germany’s final effort to send the remaining Jews to their death. Most of the Jewish fighters didn’t see their actions as an effective way to save themselves, but rather as a battle for the honor of the Jewish people and a protest against the world’s silence.

After days in which the vastly outnumbered Jews fought Nazi tanks and machine guns with smuggled-in handguns, rocks, and gasoline bottles known as Molotov cocktails, the German military chose to end the uprising by incinerating the ghetto, block by block, until it was nothing but ash and ruins. Most of the remaining 13,000 Jews died, about half of them burnt alive or suffocated.

The photo of the ghetto in ruins that accompanies this column was taken by my uncle and smuggled out. The world really didn’t much care about Jews — and truthfully still doesn’t, which makes what’s happening in Gaza all the more painful because it feeds still-virulent anti-Semitism.

After the war — after fighting for their lives, hiding, and being in forced labor camps — my parents eventually made their way to the United States, a country that did little to stop the extermination of Jews during the war and made it difficult for Jews to immigrate afterward. They became part of the Warsaw Ghetto Resistance Organization and dedicated themselves to keeping alive the memories of their families and the millions of other murdered Jews. I spent much of my childhood going to Holocaust meetings and commemorations. I knew many Holocaust survivors and their stories. What they endured was unfathomable — and has at times been painfully and wrongly denied.

I also had close ties to Israel. My father’s mother and brother were among those who went to what was then Palestine when almost no country would let in the thousands of Jews who survived the Holocaust. As the child of survivors I celebrated the story of the modern founding of Israel and how important it was to have a country where Jews would never again be oppressed and murdered for who they were. Every year in NYC we went to Israeli “independence day” marches and rallies. I visited relatives in Israel and have memories of floating in the Dead Sea and visiting Yad Vashem.

I did not know or even think to ask who lived on the land before my family. I knew about the British and partition and all the “heroic” wars but I did not see that history as I do now, as an extension of European and U.S. colonization.

In recent years I’ve come to believe that the post-Holocaust rallying cry of “Never Again” means I must speak out against the Israeli occupation of Gaza, both because of the injustices and to honor my family’s memory and the inhumane way my relatives lived and were killed in the ghetto and camps during the Nazi occupation of Poland. This year is no different but feels much more heartbreakingly urgent given the many recent deaths and the injuries of thousands of Palestinians by the Israeli army. Palestinians who were displaced and forced into areas far too small, with limited food, water, medical supplies, electricity, jobs, goods and hope, and who rose up to protest their inhumane occupation with rocks, gasoline bottles and a few weapons, are being murdered by a vastly outgunned army.

Being Jewish is a huge and celebrated part of my identity but I cannot support the Israeli occupation of Gaza. To do so would go against my personal and cultural belief in the right of all people to self-determination and freedom. It would also dishonor the memory of my parents, the enormous losses they suffered, and the hardships they endured during a brutal occupation by those who did not see them as human.

Jenny Pressman is a social justice activist and the daughter of Jewish Holocaust survivors.