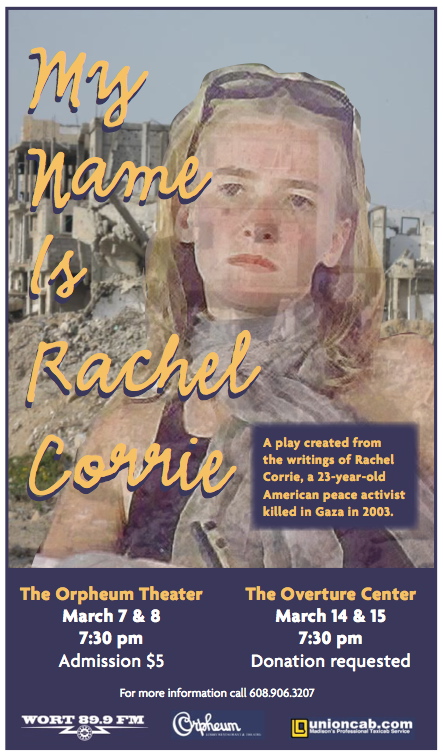 March 16 will mark five years since the death of Rachel Corrie in Rafah.

We are pleased to announce that there will be a local production of the play, My Name is Rachel Corrie, in Madison.

Rachel’s parents, Craig and Cindy Corrie, will join us for opening night as the featured guests at a benefit fish fry dinner at the Orpheum Lobby Restaurant, beginning at 5:30 pm. Dinner tickets will be $25 per person or $40 per couple, including play admission. Net proceeds will go to a humanitarian project in Gaza.

The play will be performed again on Saturday, March 8 at 7:30 pm at the Orpheum Theater.

On Friday, March 14 and Saturday, March 15, the play will move to the Overture Center for the Arts, 201 State Street. Both shows will be at 7:30 pm. A donation is requested for admission.

We hope you will join us and please bring friends and family. The play is appropriate for older middle school and high school students.

Finally, the play script has been issued in book form and can be purchased at Rainbow Bookstore. It will also be available at the play.

For more information on the Madison production, call 608-906-3207 or e-mail rafahsistercity(at)yahoo.com

“Passionate, sometimes irreverent and always intelligent, My Name is Rachel Corrie explores an extraordinary young woman’s singular experience in a region most of us only know from the news.”
— Neworld and Teesri Duniya Theaters, Canada

My Name is Rachel Corrie is a play that has become a flash point for opposing feelings about the Israeli Occupation of Palestinian land.

On March 16, 2003, 23-year-old Rachel Corrie, of Olympia, Washington, was crushed to death by an Israeli Army bulldozer in the Gaza strip. A volunteer with the International Solidarity Movement, Corrie was attempting to stop the destruction of a Palestinian home.

Edited by British actor Alan Rickman (best known for his portrayal of Professor Snape in the “Harry Potter” films) and Guardian journalist Katherine Viner, My Name is Rachel Corrie is assembled almost entirely from journal entries and e-mails written by Corrie.

The play premiered at the Royal Court Theater in London, England in the spring of 2005, to sell-out houses and rave reviews. However, the U.S. premiere at the New York Theatre Workshop was cancelled amid cries of censorship. The London production subsequently had a successful off Broadway run at the Minetta Lane Theater in New York and about a dozen additional productions have been or will be mounted in Canada and the U.S.