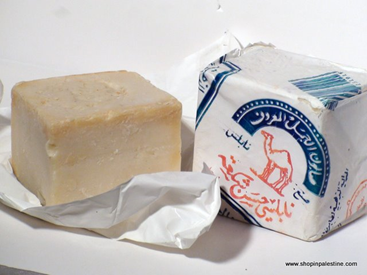 Our olive oil soap is made in the West Bank city of Nablus by the Hasan al Shaka’a factory. This Nabulsi soap is a Castile soap made from olive oil, water and an alkaline sodium compound.

It has been described as “the color of an old book” and is unscented, although it does have its own distinct aroma.

Originally made by women for home use, by the 1300’s it had become an important industry. It is estimated that in the early 20th century, 30 factories in Nablus were supplying half of the soap in Palestine.

The industry was heavily damaged by an earthquake in 1927. It also began to suffer from competition from other types of imported soaps. In more recent years, the Israeli military occupation has physically destroyed and economically crippled the remaining industry so that at present there are only two fully functioning Nablus soap factories: those of the Shaka’a and the Tuqan families.

This film shows the process of traditional soap production in the old soap factory in central Nablus. The film was produced in May 2014 by Eirik Moe, Stavanger, Norway.

The Tuqan factory in Nablus is the oldest survivor of this once-prominent industry.

Nablus, occupied West Bank – The Palestinian city of Nablus has long been renowned for the production of olive oil soap. With origins reportedly stretching back more than 1,000 years, the localised practice progressed to an industrial scale around the 14th century.

Several factories were destroyed by the 1927 earthquake that hit the city, and later, Israeli military attacks on Nablus during the second Intifada caused irreparable damage to several historic factories.

Today, only two factories remain in production. The Tuqan factory is the oldest survivor of this once-prominent industry, and while business is no longer what is used to be, the factory continues to utilise traditional production methods to keep the industry alive. The Tuqan family soap factory has operated from its current premises, at the entrance to the old city of Nablus, for about 100 years. [Rich Wiles/Al Jazeera] The Tuqan family arrived in Palestine in the 16th century from Syria, and soon became one of Nablus’ most prominent families. [Rich Wiles/Al Jazeera] Production of olive oil soap begins by mixing the raw ingredients for several days in large circular ‘cooking’ tanks. Historically, the dry olive husks that remained after all the oil had been extracted were used as fuel for the fires over which the soap was cooked. [Rich Wiles/Al Jazeera] After cooking, the liquid soap is poured directly on to the factory’s cold stone floor and left to cool. As it solidifies, individual bars are cut, and each bar is stamped with the family emblem. [Rich Wiles/Al Jazeera] After the cutting, the soap is then stacked in small square towers and left alongside the large arched windows for the next stage of the drying process. [Rich Wiles/Al Jazeera] All the workers at the Tuqan factory are members of Nablus families that have historically been involved in the soap industry. [Rich Wiles/Al Jazeera] The final stage of the drying and storage process involves stacking individual bars into the large conical towers for which the traditional soap industry is famous. The shape of the towers allows air to circulate between each individual bar. [Rich Wiles/Al Jazeera] The entire drying process can last a month or more, depending on the time of year and environmental conditions. [Rich Wiles/Al Jazeera] Although Nablus soap was historically widely exported across the Middle East and Europe, today’s main markets are within Palestine and surrounding Arab regions, although some fair-trade businesses in Europe and the United States also stock it. [Rich Wiles/Al Jazeera] Alongside Nablus, the Lebanese city of Tripoli was also famous for the historic production of high-quality olive oil soap. [Rich Wiles/Al Jazeera] The Tuqan factory produces only traditional olive oil soap, which is unscented. Another factory in Nablus is now also producing soaps with added herbal or fruit extracts, which are popular in Western markets. [Rich Wiles/Al Jazeera]