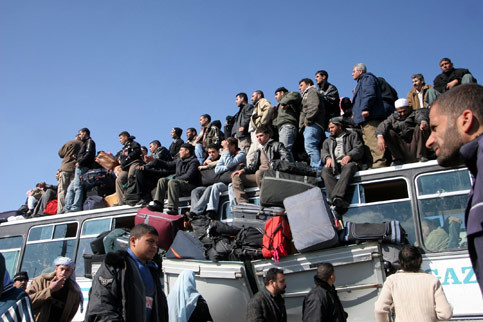 Palestinians wait at the Rafah Crossing in Gaza to pass through to the Egypt, 6 February 2007. (MaanImages/Hatem Omar)

The Israeli-Palestinian conflict is one area where liberals and neo-conservatives in America find common ground. From Nancy Pelosi and Hillary Clinton all the way to George Bush and Condoleezza Rice one and all are united in supporting Israel’s assault on the Palestinian people and their land.

The criticism of Jimmy Carter’s book Palestine Peace Not Apartheid is a case in point. The hysteria on the Right is not worthy of repetition, but House Speaker Nancy Pelosi outdid herself by issuing a statement that: “It is wrong to suggest that the Jewish people would support a government in Israel or anywhere else that institutionalizes ethnically based oppression.” Wrong to suggest? Here is something right to suggest: Madam Speaker, it is time for you to visit Gaza.

In The Tribes Triumphant, arguably one of the best books ever written about the Middle East, journalist Charles Glass describes children in Gaza on their way to school: “… little girls with white fringe collars, boys leading their younger brothers … with canvas bags of books on their backs, hair brushed back and faces scrubbed … Thousands and thousands of children’s feet padding the dusty paths between their mother’s front doors and their schools … Beautiful youngsters so innocent that they could laugh even in Gaza.”

Glass reveals that 56.6 percent of the 1.4 million people living in Gaza (if you can call it living) are under the age of 18. That means 792,400 children; Gaza has no cinemas, no theatres, no concert halls, and no space for entertainment or amusement. Where then do these children play? Israel controls all access to, from and within Gaza, never allowing these children to see the world outside this tiny crowded strip of sand they call home. If this, Madam Speaker, is not ethnically based oppression, what is?

“Gaza First” was the slogan that got the Oslo accords off the ground in the early 1990s. Today, as innocent, unarmed men, women and children in Gaza are imprisoned, starved and killed by Israel in broad daylight, its obvious that it, meaning the Oslo agreement, was another nail in the coffin of a just and lasting peace. Then came Sharon’s Gaza disengagement, which was a disingenuous claim by Israel to make “concessions for peace”. Pretending to pull out of Gaza for the sake of peace, Israel tightened the noose around Gaza and its people while freeing itself from any obligation for the welfare of the people of Gaza.

People call Gaza a hotbed of terror, neglecting, or perhaps refusing to see that people in Gaza are attempting, albeit in all futility, to resist the terror under which they are forced to live. Close to one million of Gaza’s 1.4 million residents are refugees or descendents of refugees forced out of their homes from other parts of Palestine only to be imprisoned and impoverished in Gaza. In The Roadmap to Nowhere Tanya Reinhart writes: “Since 1967, 280,000 people in Gaza have passed through Israeli prisons, detention cells and interrogation rooms.” The connection cannot be overlooked: Residents of Gaza have made a name for themselves in resisting the Israeli occupation of Palestine even before 1967 and they have paid dearly for this resistance.

On 11 December 2006 Jan McGirk described in The Independent the effects of Israeli terror on the children of Gaza: “No sane child can remain unaffected by the mayhem of Gaza Strip. Playmates frequently are killed or maimed: at last count, Israeli guns had slain 88 Gazan children and wounded another 343 between mid-June and December, 2006” She further writes that “In Gaza’s grim conditions, mothers find it hard to tell if their offspring are crying out of fright, pain or misery. But when normally bickering brats fall silent, it’s the first sign of mental scars from being constantly scared.” She adds, “Muhammad, who would hit smaller children or shatter cups when he did not get his way, eventually revealed in an after school meeting that two IDF soldiers had executed a young man right in front of him.”

In America people still speak of a “peace process”, and the situation in Gaza and in the West Bank is characterized as a conflict between two people who can’t find a fair compromise. Few dare to mention that the only process that is taking place is oppression for the sake of expansion. Palestinian children are imprisoned, traumatized, starved and murdered so that Israeli can maintain its hegemony over the: “Land of Israel”.

Gaza is collateral damage, the children of Gaza are of no consequence and the leaders of the enlightened, democratic Western world could not care less. But in spite of its enormous military might Israel’s authority over life in Gaza can be must be defied. People conscience must act so that the ethnically based oppression, of which House Speaker Pelosi says it is wrong to accuse Israel, must be brought to an end.

Miko Peled is an Israeli living in San Diego. He is the son of Israeli General Matityahu Peled.