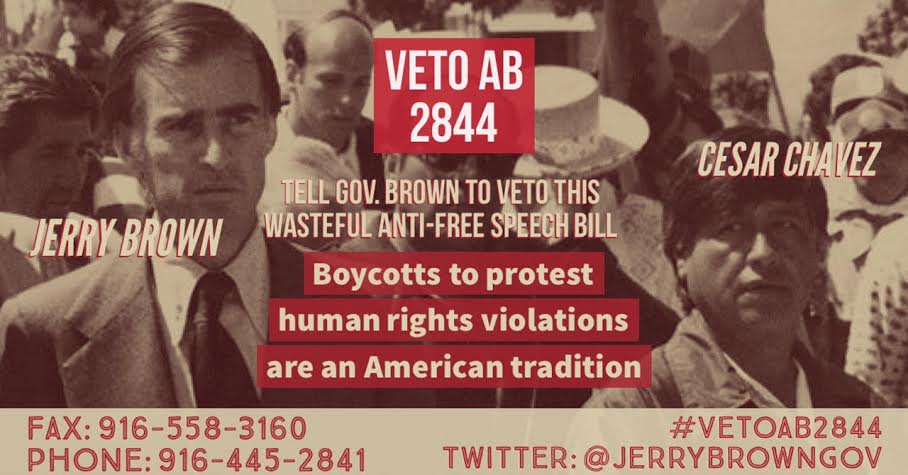 California’s AB 2844 is an attack on the First Amendment right to freedom of speech and protest. It is intended by its authors to create a blacklist of supporters of boycott, divestment and sanctions (BDS) campaigns for Palestinian human rights. This is of urgent concern to Californians who will be immediately affected by the legislation, and also of relevance to all Americans given the rapid spread of these laws to multiple states, chipping away at our right to use boycott to advocate for political change.

The authors of AB 2844 have portrayed the legislation as an anti-discrimination measure. However, the purpose of the bill, as admitted to by its authors, is to stifle the nonviolent boycott, divestment, and sanctions (BDS) movement for Palestinian human rights, even at the cost of the US constitution. As CODEPINK co-founder Jodie Evans says, “it is up to all of us to let California Governor Jerry Brown know that we do not want to support Israel’s policies of occupation and apartheid nor give up our right to freedom of speech and nonviolent protest.”

AB 2844 passed through the California Senate and is expected to pass the California Assembly in the next few days. At that point, Governor Brown will have only 12 days to sign or veto the bill. If Governor Brown does nothing, the bill will be approved by default. Join CODEPINK, Jewish Voice for Peace, and the rest of the Coalition to Stop AB 2844 in telling Governor Brown to veto AB 2844.

We urge you to veto AB 2844, an unconstitutional and costly attack on Californians’ free speech and the movement for Palestinian human rights.

AB 2844 chills free speech by falsely associating legal and time-honored boycotts for human rights with unlawful discrimination, and by creating a vague new crime in the process. The bill could cost California taxpayers over $140 million (Department of Finance estimate) and unknown additional sums for fielding complaints and lawsuits.

Although the title and some of the content of AB 2844 have changed over time, its intent remains the same: to stigmatize and suppress protected political speech, especially advocacy for Palestinian human rights through the nonviolent tactics of boycott, divestment and sanctions.