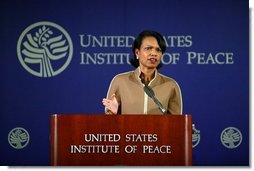 We are fully aware that outside support can sometimes harm more than it helps. Some critics in the Muslim world will point to aid from the West as a way to de-legitimize reformist ideas. We are thinking hard about how moderate and democratic forces in the West can usefully help those in the Islamic world who are fighting against extremism — because they need our help. But, of course, democracy and freedom must be home-grown. Today, outside support for extremists is common, while moderates too often struggle with inadequate resources and too little solidarity. That has to change — and we have to help to change it.

Americans also need to hear the stories of the people of the Muslim world. We need to understand their challenges and their cultures and their hopes; to speak their languages and read their literature; to know their cultures in the deepest sense. Our interaction must be a conversation, not a monologue. We must reach out and explain, but we must also listen.

Student exchanges and sister city programs and professional contacts helped forge lasting ties of friendship and understanding across the Atlantic and across the barriers of tyranny during the Cold War. Similar efforts today can achieve similar results between Americans and Muslim peoples throughout the world.

This is, by the way, not a task for the American government, alone. Our nation needs the help of all of our citizens — of our schools and our universities, and of institutions like this one, the U.S. Institute of Peace. All of us must play a vital role in this dialogue.