Why the Israeli assault on Gaza? Why now? What are the Israeli motivations? What are the broader, deeper contexts for this massive act of aggression against a largely defenseless people? These and other questions will be the focus of a conversation with host Allen Ruff and special guest Jennifer Loewenstein, Palestine Human Rights activist, co-founder of the Madison-Rafah Sister City Project and Lecturer on the Contemporary Middle East, the Department of Languages and Cultures of Asia, the UW-Madison.

“A Public Affair”, WORT 89.9 FM, Friday, January 2, 2009 at noon, call in 256-2001
Judith Siers-Poisson hosts a show on the crisis in Gaza. Guests: Ewa Jasiewicz and Greta Berlin of the Free Gaza Movement on the Israeli attack — in international waters — on the boat Dignity. Dignity was loaded with 3-4 tons of emergency medical relief supplies, doctors, and international observers including former U.S. Congresswoman and recent presidential candidate for the Green Party, Cynthia McKinney. Jasiewicz is in Gaza, Berlin in the U.S. Also, a representative of the Al Mezan Center for Human Rights in Gaza.

Our friends in Rafah and elsewhere in Gaza report massive casualties from Israeli air strikes. Hospitals are overflowing with more than 200 dead and over 500 wounded (so far). So-called “Hamas compounds” included a civil police training school where scores of young men desperate for a salary to support families were assembled for a graduation ceremony. Bombs hit at school let-out time so children were in the streets in large numbers.

Many expected that no Israeli attack would be launched just hours after Israel, as widely reported in the western media, had finally allowed the delivery of a small amount of humanitarian aid to the starving population of Gaza. Widespread property damage is making life in the cold and dark of Gaza even more miserable than it was, if such a thing can even be imagined. And as I write this, it is reported that new missile attacks are targeting a mosque and various social welfare agencies located in densely crowded neighborhoods.

And the U.S. media continues to promote the myth of Israeli “retaliation” when in reality it was Israel that broke the truce several weeks ago.

(27 Dec) Death shrouds the hallways of Gaza City’s Ash-Shefa medical compound Saturday, its smell creeping in from all corners. Amputated bodies are strewn throughout hallways because morgues in the city can no longer accommodate the dead. In one corner a man stands with his seven year old son in a cardboard box because the hospital ran out of sheets to cover the dead with. This is how he will carry him home and bury him. Another man stands dazed, in shock after watching his son Mohammed killed during his graduation ceremony at the de facto police headquarters. The father of one of Mohammed’s classmates stood next to his son as he was decapitated. The man is still screaming.

(27 Dec) In front of our house we found the bodies of two little girls under a car, completely burnt. They were coming home from school. This is more than just collective punishment. We are being treated like laboratory animals.

END_OF_DOCUMENT_TOKEN_TO_BE_REPLACED 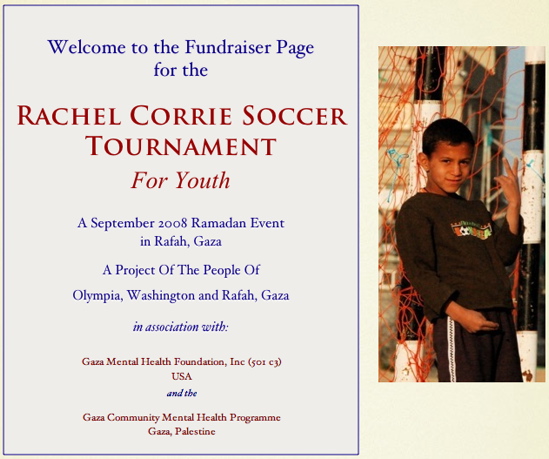 Thank you so much for your support of the Rachel Corrie Ramadan Soccer Tournament for Youth. Because of your kind contributions we made our goal and the event was a huge success. Twenty teams of youths and mentors played as neighbors in an uplifing community event. Together we helped created a genuine community space where Gazans could meet to heal the wounds of internal violence. Already plans are forming for next year’s tounament and we hope you will be there with us to make it happen.

To get all the updates, photos and commentary, please visit us at Rachel Corrie Ramadan 2008 Cup. 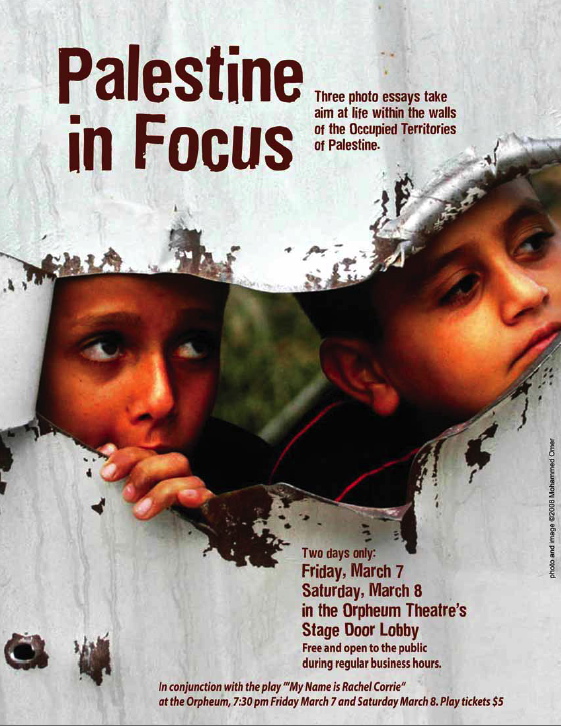 In conjunction with the play My Name is Rachel Corrie, a photo exhibit will be on display outside of Anderson Auditorium, Predolin Humanities Center, Edgewood College, from October 1 – 4. Free and open to the public, the exhibit features photos by award-winning Palestinian journalist, photographer and website host Mohammed Omer.

Requests for printed copies of any of the images can be made before or after the play performances, or by sign-up sheet at the exhibit, and purchased for delivery at a later date. All proceeds from the sale of the prints will go to support Omer, a native of Rafah.

For more information about Mohamed Omer, including an account of his recent detention and torture at the hands of Israeli officials while returning from Europe where he had been given the prestigious Martha Gellhorn prize for journalism, see rafah.virtualactivism.net/news/todaymain.htm.

END_OF_DOCUMENT_TOKEN_TO_BE_REPLACED

I am a Palestinian journalist from Gaza. At the age of 17, I armed myself with a camera and a pen, committed to report accurately on events in Gaza. I have filed reports as Israeli fighter jets bombed Gaza City. I have interviewed mothers as they watched their children die in hospitals unequipped to serve them because of Israel’s embargo. I have been recognized for my reporting, even in the United States and United Kingdom, where I have won two international awards. I have also been beaten and tortured by Israeli soldiers.

This summer, at age 24, I was honored to learn that I had become the youngest journalist to receive the Martha Gellhorn Prize for Journalism, named for the famed American war reporter and awarded to journalists who counter propaganda with the truth. Although Israel has sealed Gaza’s 1.5 million Palestinians in what many now call the world’s largest open-air prison, Dutch MP Hans Van Baalen lobbied the Israeli government to let me leave Gaza to receive my award in person. Upon my return from London, I was surrounded by Israeli security officers. I was stripped naked at gunpoint, interrogated, kicked and beaten for more than four hours. At one point I fainted and then awakened to fingernails gouging at the flesh beneath my eyes. An officer crushed my neck beneath his boot and pressed my chest into the floor. Others took turns kicking and pinching me, laughing all the while. They dragged me by my feet, sweeping my head through my own vomit. I lost consciousness. I was told later that they transferred me to a hospital only when they thought I might die.

Today, I have difficulty breathing. I have abrasions and scratches on my chest and neck. My hands don’t function well; typing is difficult. My doctor informed me that due to nerve damage from one kick, I may be unable to father children and will need to have an operation.

Israeli attacks on journalists are not new; nor are they rare. In April, Reuters cameraman Fadel Shana was killed by fire from an Israeli tank. He was in a car, clearly marked as press. According to Amnesty International, “Fadel Shana appears to have been killed deliberately although he was a civilian taking no part in attacks on Israel’s forces.”

Reporters Without Borders has condemned the Israeli military’s widespread “abusive behavior” of Palestinian journalists. And the Committee to Protect Journalists reports that journalists covering Israeli military actions in the West Bank and Gaza “contend with perennial abuses at the hands of Israeli forces.” In 2007 alone, Israeli soldiers shot photographers from Agence France-Presse, Al-Ayyam newspaper and Al-Aqsa TV. The television cameraman, Imad Ghanem, fell to the ground when wounded. Israeli forces then shot him twice more in the legs. Both of his legs have been amputated.

Could it be that despite their tanks, fighter planes and nuclear arsenal, Israel is threatened by our cameras and computers, which give the world access to images and information about their military occupation of Palestinians? Indeed, this month a Palestinian girl filmed an Israeli soldier shooting a blindfolded Palestinian at point blank range with a rubber bullet. The video aired widely, on CNN, NBC News and the BBC, among other media outlets.

END_OF_DOCUMENT_TOKEN_TO_BE_REPLACED 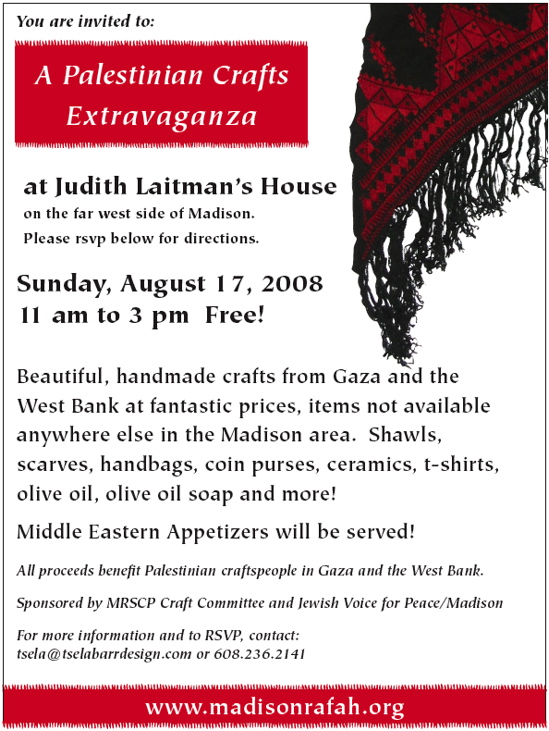 We have been asked by some of our friends from Olympia, Washington, Rachel Corrie’s home town, to solicit support for an ambitious new undertaking to benefit the young people of Rafah.

In September, during the month of Ramadan, the Gaza Community Mental Health Programme (GCMHP), one of our partner groups in Rafah, plans to host the first ever all-Rafah youth soccer tournament. They hope that this tournament will begin the process of establishing a soccer park and organized soccer leagues in the war-ravaged Rafah community, providing a healthy outlet for Rafah’s youth (over half the population of Gaza is under 18).

Organizers have set a modest but critical goal of raising $2,500 by August 1. MRSCP has agreed to contribute $500 to this cause. We urge you to join us.

Tax-deductible U.S. donations will be channeled through the Gaza Mental Health Foundation, an approved 501(c)(3) charitable organization. Please do not make out checks or send donations to MRSCP.

END_OF_DOCUMENT_TOKEN_TO_BE_REPLACED

Shafia Powell and her friend Nabila have generously offered to host a garage sale next weekend to benefit the Rafah Youth Soccer Tournament planned for this September.

THE SALE WILL BE ON MADISON’S NORTH SIDE AT 3601 MARCY LANE, OFF OF TROY DRIVE. THE TENTATIVE HOURS ARE:

Tournament supporters in the U.S. were successful in raising the money needed to launch the tournament and will shortly be doing “Phase 2” fund raising to support it.

IF YOU HAVE ANY ITEMS TO DONATE TO THE SALE, please contact Nabila at 242-9179 to arrange to drop them off. If you need help transporting donations please contact Shafia at 772-5744. Holy Land Olive Oil should be available at the sale as well.

Please help us spread the word about this sale. And as always, thanks for your support.

“Occupation 101” (2006) Made at considerable personal sacrifice by two brothers, Sufyan and Abdallah Omeish, this 60-minute 2006 film has won at least eight major film festival awards. It provides an excellent, comprehensive historical summary and analysis of the Israeli occupation. Discussion will follow: What is the nature of the occupation? What does it mean for current proposed “one-state solutions”? Can there be an end to the Israeli occupation? Is real peace possible? What can we, in Madison and the U.S, do to work for peace in this part of the Middle East?