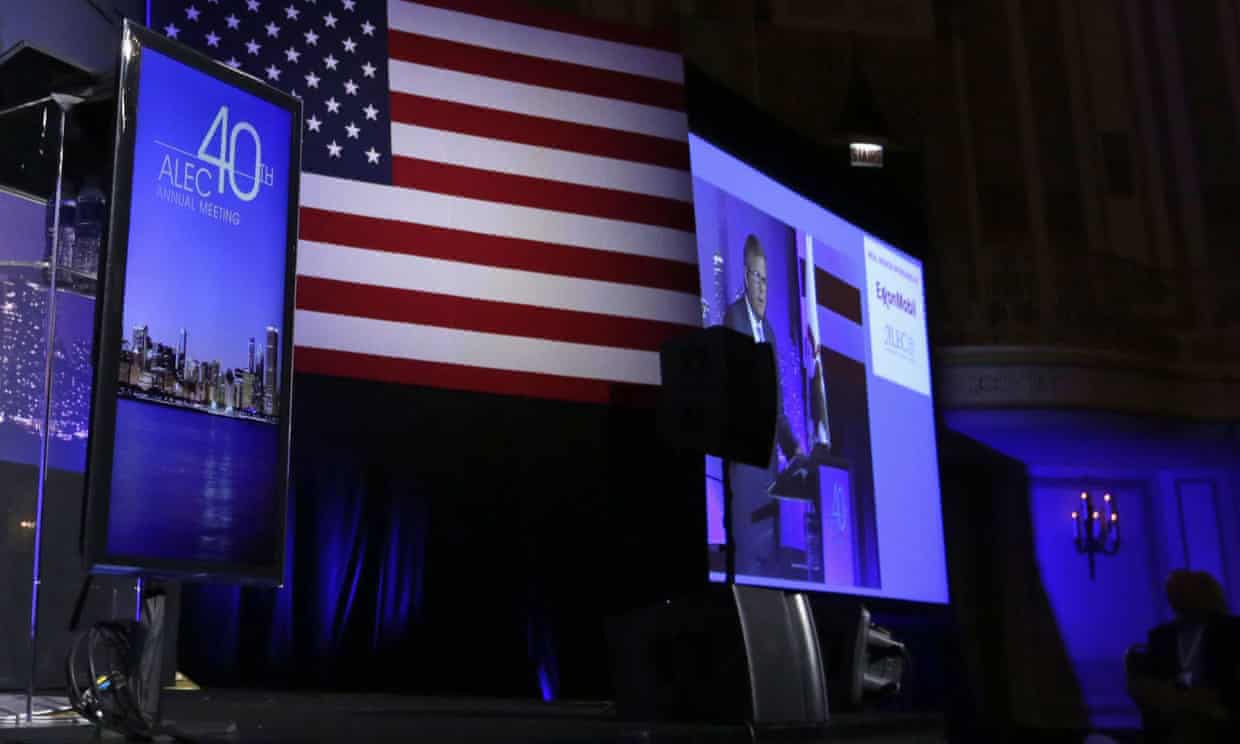 The Guardian asked Alec to comment, but received no reply.

The emails give a clear indication of the motive behind the push for antisemitism bills – countering criticism of Israel on campuses.

Fine writes that under the new laws “antisemitism (whether acts by students, administrators or faculty, policies and procedures, club organizations etc) [will] be treated identically as how racism is treated. Students for Justice in Palestine is now treated the same way as the Ku Klux Klan – as they should be.”

Students for Justice in Palestine (SJP) is a leading pro-Palestinian student activist group that campaigns in at least 80 campuses for an international boycott of Israel in protest at its occupation of the West Bank and Gaza. It has been at the forefront of the boycott, divestment and sanctions (BDS) movement in the US that has already prompted a number of states to pass new laws penalizing such boycotts of Israel to the dismay of free speech advocates.

Sabag was asked by the Guardian about the comparison drawn by Fine between SJP and the violent white supremacist group the KKK. He said: “SJP is one of America’s most prominent anti-Israel propaganda groups and has material connections to organizations designated by the US justice department as terrorism co-conspirators. In the course of promoting BDS, or national-origin based discrimination against Israel, SJP members typically employ classic antisemitic themes and blood libels.”

He added: “They also employ gross misrepresentations of Zionism, Israel’s Jewish national character and government policies. This messaging strategy aims to facilitate the development of anti-Israel and anti-Jewish perspectives among unsuspecting and unknowledgable audiences.”

The Guardian spoke to a student member of SJP at University of California, Berkeley who insisted on anonymity because of the harassment she had experienced on campus. Last November she was one of the SJP organizers of a vigil to mourn jointly the 11 Jewish victims of the mass shooting at the Tree of Life synagogue in – the deadliest attack against Jews in America – and three Palestinian children who were killed that same October weekend from an Israeli airstrike. 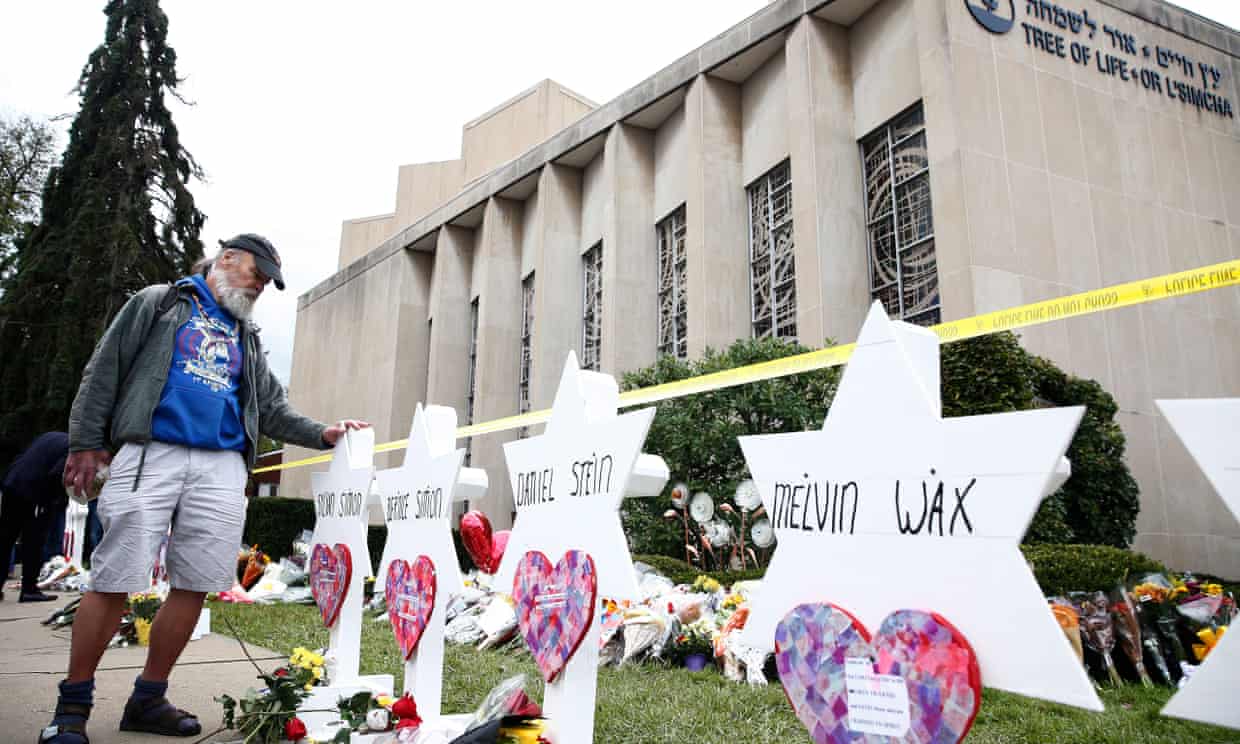 A man pauses at the memorials set up for each of the 11 people killed at the mass shooting at the Tree of Life synagogue in Pittsburgh, Pennsylvania. (Jared Wickerham/EPA)

“We wanted to make a statement about solidarity between our two communities, that we were all in mourning,” said the student, describing herself as an anti-Zionist Jew from a strongly Zionist family background.

After SJP advertised the vigil on its Facebook page, the student said she came under a barrage of attacks on social media accusing her of being antisemitic. She said she found the charge upsetting and ironic.

“As a Jewish student, I deeply care about antisemitism because it affects me and my family personally, and because it informs my concern about oppression of Jews and Palestinians and all people – it’s why I do what I do.”

In the face of such opprobrium, the Berkeley branch of SJP cancelled the public vigil and held it privately off-campus.

The push for new state laws comes at a time of increasing antisemitic attacks in the US and around the world. The latest FBI figures for 2017 recorded a 37% increase on the previous year in antisemitic hate crimes in the US, up to 938 incidents. Other databases put the figure substantially higher.

In the context of this rising violence, much of the text of the Florida antisemitism bill is non-contentious. It outlaws a number of anti-Jewish tropes such as “accusing Jews as a people of inventing or exaggerating the Holocaust”.

But critics say such uncontroversial material sits alongside clauses in the bill that would censor debate on Israeli government action.

Liz Jackson, a staff attorney with Palestine Legal that represents campaigners for Palestinian rights in the US who is herself Jewish, said: “It’s riding off the universally agreed idea that antisemitism is bad and must be stopped at a time of a frightening resurgence in white supremacist violence. It’s extremely cynical to masquerade as fighting antisemitism when you are, in fact, shutting down criticism of Israel.”

The clauses relating to Israel in the definition of antisemitism now being disseminated to several states emanates from a 2005 text from the European Monitoring Centre on Racism and Xenophobia (EUMC). Ken Stern, director of the Bard Center for the Study of Hate who was a lead drafter of the EUMC text, said it was intended to facilitate reporting of antisemitic attacks across Europe.

“It was never intended to suppress discussion of ideas on campuses.”

Stern said that attempts to silence opposition was happening on both sides of the Israel-Palestinian divide on US campuses. “It’s a battlefield right now.”

But, he added, he was concerned “about the attempt to curtail free speech among students – the whole idea is to encourage them to wrestle with new ideas, particularly those they find disturbing”.

Sabag dismissed first amendment fears about the new antisemitism bills. “To suggest that such laws violate first amendment rights is an outright falsehood that serves the purposes of anti-Israel and antisemitic forces. The Florida law addresses criminal and discriminatory conduct that is not protected by the first amendment, and it includes explicit provisions that the law is not to be construed in any way that would violate free speech.”