Palestine has won people’s hearts and captivated the world’s attention — and its team isn’t even playing. 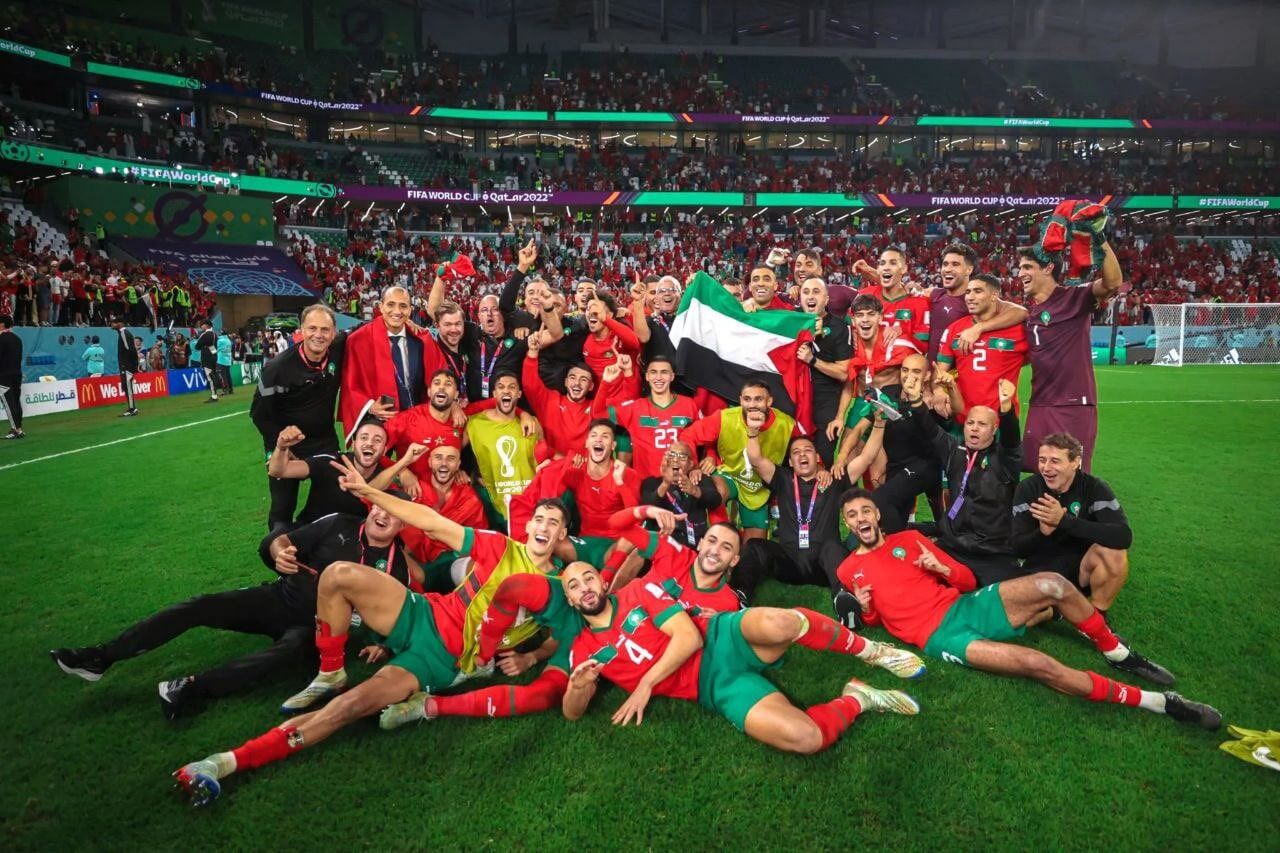 As the World Cup enters its final 10 days, and the remaining eight teams gear up for the quarter final rounds, many can only guess at who might take home the whole thing.

What can be said for certain, however, is there’s one nation that has won people’s hearts, and captivated the world’s attention like no other — and their team isn’t even playing.

Since the World Cup began last month Palestine has taken center stage in Qatar, both on and off the field. Symbols emblematic of Palestine, like the flag and Keffiyeh, have been present in the stadiums at nearly every match, in the crowds on the streets, on international TV broadcasts, and in fan parks.

The national team of Morocco even used their moment of glory following their victory over Spain in the round of 16 to hoist up the Palestinian flag alongside their own.

For Palestinians, the displays of solidarity have been nothing short of momentous.

“It’s just been very exciting to experience,” George Zeidan, a Palestinian from the town of Beit Jala who has been in Qatar for the World Cup, told Mondoweiss.

“The Palestine solidarity I’ve experienced here in Qatar has been amazing. It’s a great thing, to not just see people showing solidarity when they see a video of horrible crimes by the Israeli army, but to see people raise the Palestinian flags in their happy moments as well,” Zeidan said.

Following the killing of five Palestinains in the occupied West Bank by Israeli forces on November 29, hundreds of fans in the Al-Bayt stadium could be heard chanting “With our souls and blood, we will redeem you, O Palestine!” during the Qatar vs. Netherlands match. The popular revolutionary chant is featured commonly in Palestinian protests and funerals of martyrs.

“You’re talking about thousands of people chanting. It was an incredible feeling to see all those people chanting from their hearts for Palestine,” Jalal Abu Akhter, who was watching the match live on TV when he heard the chants, told Mondoweiss from his home in Ramallah, wearing his Palestine national team jersey.

In the next day’s match between Tunisia and France, a Tunisian fan invaded the pitch, doing cartwheels as he held a Palestinian flag, while the crowd chanted “Palestine! Palestine!” A few days prior, during Tunisia’s match with Australia, fans unveiled a massive “Free Palestine” banner in the crowd.

“This is the first time we see Palestine take center stage in such a global tournament. It’s actually a great feeling. We feel visible, we feel seen,” Abu Akhter said.

Despite the Palestinian national team ranking quite low in FIFA’s world ranking, the World Cup is somewhat of a religious experience in Palestine.

Every four years, restaurants and cafes in towns and cities across the country pull out an array of flags (Brazil, Spain, Argentina, France and Italy tend to be the most common)  and hang them on their storefronts, attracting crowds of viewers nearly every night for the duration of the month-long tournament.

Palestinians say that this year, however, they can feel something different in the air.

“This World Cup is different than any World Cup before it,” Ghanem al-Jael told Mondoweiss over the sounds of sports commentators and excited crowds of fans gathered around an old television screen on a street corner in Gaza City’s al-Rimal neighborhood.

“The most joyful thing is that we see Palestine strongly represented, even though our national team isn’t part of the competition. But we see that all the fans, whether Arab or foreigners, are supporting Palestine,” he said.

Al-Jael added that the displays of solidarity have given Palestinians in Gaza like himself hope. “To see that people are aware of our just cause, and they are fearless in their support, like raising the flag and calling for a free Palestine, and rejecting the occupier,” he said. “All these things give us hope and lift our spirits.”

Rana al-Lahham, a resident of the Dheisheh refugee camp in Bethlehem, hasn’t missed a single match in this year’s World Cup, and it’s not just because she’s a “die-hard” football fan as described by her friends.

“I expected to see the Palestinian flag present at the World Cup, just because it’s being held in Qatar, an Arab country. But I didn’t expect to see this level of solidarity,” she told Mondoweiss.

“Seeing people from all over the world, not just Arab fans, raising the Palestinian flag, wearing Palestine armbands and bracelets, and singing Palestinian songs, it has been amazing to see,” she said. “It gives me a small dose of hope, and of course makes me want to take part in the World Cup festivities even more.”

For Palestinian fans, perhaps one of the most satisfactory things about this year’s World Cup, aside from the flags, banners, and encouraging chants of solidarity, have been the dozens of instances of fans from around the world refusing to speak to Israeli reporters, or interrupting live broadcasts from Israeli TV channels in Qatar, all of which have been documented and shared hundreds fo thousands of times on social media.

“It was a wake up call to the Israelis that whatever delusions they believed they had succeeded in making through the Abraham Accords, in fact they are still not welcome in the Arab world,” Abu Akhter said.

Despite the normalization deals signed with Israel by Arab countries like Morocco and the UAE in recent years, George Zeidan said that during this World Cup, the people have made their position clear.

“Israelis would like to think there is ‘peace’ because they’ve signed some peace treaties with Arab countries. But we’ve seen overwhelming support [for Palestine] from the people,” he said, adding that the support for Palestine was everywhere during celebrations following Morocco’s victory over Spain.

“It’s important for Israelis to understand their peace treaties are with non-democratic countries that don’t represent the will of the people,” Zeidan said. “The only way for them to reach a just peace with the Arab people is through the Palestinians, and that message has never been clearer than it is right now. “

For Rana al-Lahham, this World Cup has sent the very important message that “no matter what, the Arab world and Palestinians remain brothers and support each other, and that the Palestinian cause is in the heart of every Arab, no matter what their governments say.”