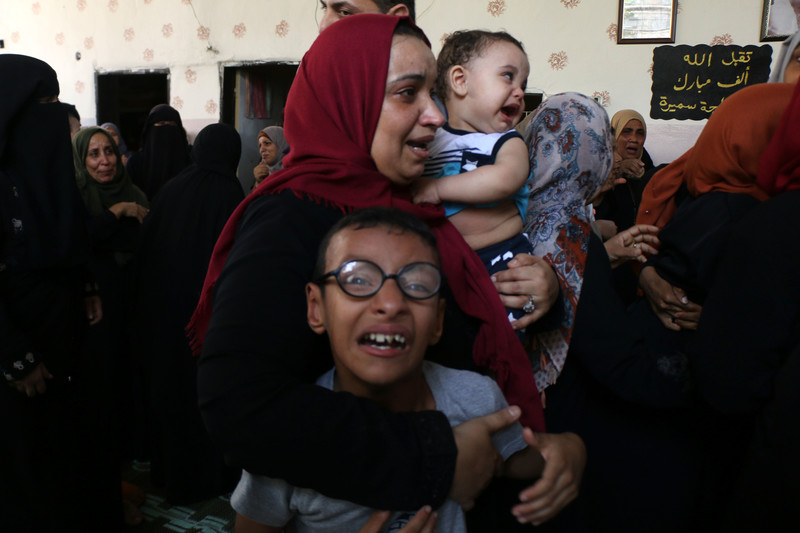 Relatives of Muhammad Abu Namous, one of three Palestinians killed along the Gaza-Israel boundary overnight, mourn during his funeral in Beit Lahiya, northern Gaza, on 18 August. (Mariam Dagga/APA images)

“Israel is ready to carry the costs of helping Gazans emigrate,” and would potentially use air force bases in Israel for that purpose, The Times of Israel reported on Monday.

The unnamed official, in Kyiv as part of Benjamin Netanyahu’s delegation to Ukraine, added that more than 35,000 Palestinians left the coastal enclave last year.

Two million Palestinians live in the Gaza Strip, which has been subjected to a punishing Israeli economic blockade for 12 years and repeated military offensives.

Residents of the territory have been plunged into poverty and cut off from the rest of Palestine and the wider world.

Every two in three Palestinians in Gaza is a refugee from lands inside what is now Israel. That government forbids them from exercising their right to return as enshrined in international law because they are not Jews.

The senior Israeli official was reported by The Times of Israel as saying that his government is asking countries to absorb Palestinians emigrating from Gaza.

“The official said the National Security Council had been spearheading the effort, with Netanyahu’s blessing, for about a year,” The Times of Israel added. It has also been “discussed in the security cabinet several times.”

No European or Middle Eastern country has agreed to participate in the scheme, according to the publication. The official did not say whether any other governments are cooperating.

The revelation is an example of how ideas that supposedly exist only at the extreme fringes of Israeli politics are often not far from government policy.

During Israel’s 2014 assault on Gaza, Moshe Feiglin, then deputy speaker of Israel’s parliament, proposed a plan to “concentrate” Palestinians in Gaza in border camps and “exterminate” any who resisted, while destroying all civilian housing and infrastructure.

Feiglin, who represented Netanyahu’s ruling Likud Party, suggested that “Israel will start searching for emigration destinations and quotas for the refugees from Gaza.”

Emigration from Gaza – including among recent university graduates, who face the highest unemployment rates in the world – has been on the rise.

It is no secret that Israeli leaders have maximalist designs on all of historic Palestine. Making life unbearable to coerce Palestinians to leave their land is the primary motivation of many of Israel’s policies in the West Bank and Gaza.

But Israeli officials generally don’t admit to it or tell media that government offices are executing such plans.

Human rights groups have long stated that the economic blockade on Gaza is an act of collective punishment, imposed after Hamas took control of internal affairs in the territory in 2007. Israel says it is a security measure.

The International Committee of the Red Cross has affirmed that Israel’s siege is an illegal act of collective punishment.

Critics of the blockade contend that Israel’s siege and repeated military assaults on Gaza are aimed at breaking resistance to the occupation.

Since early 2018, more than 200 Palestinians in Gaza have been killed during Great March of Return protests calling for an end to Israel’s siege. Those demonstrations have also demanded that Palestinian refugees be allowed to exercise their right to return.

Israeli occupation forces have killed more than 100 Palestinians in Gaza outside the context of protests during that same period.

On Saturday, three Palestinians were killed by Israeli helicopter and tank fire along the northern Gaza-Israel boundary.

Israeli media reported that the deadly strike on Gaza followed the launch of three rockets from the territory, causing no injuries. A rocket was also reportedly fired from Gaza on Friday and intercepted before it landed in Israel.

The killing of the three men brings to eight the number of Palestinians from Gaza slain by Israel in a single week.

The following day, Israeli forces killed another Palestinian who shot at soldiers while he attempted to cross the boundary.

On Monday, factions in Gaza warned Israel that the Strip is “a volcano about to erupt.”