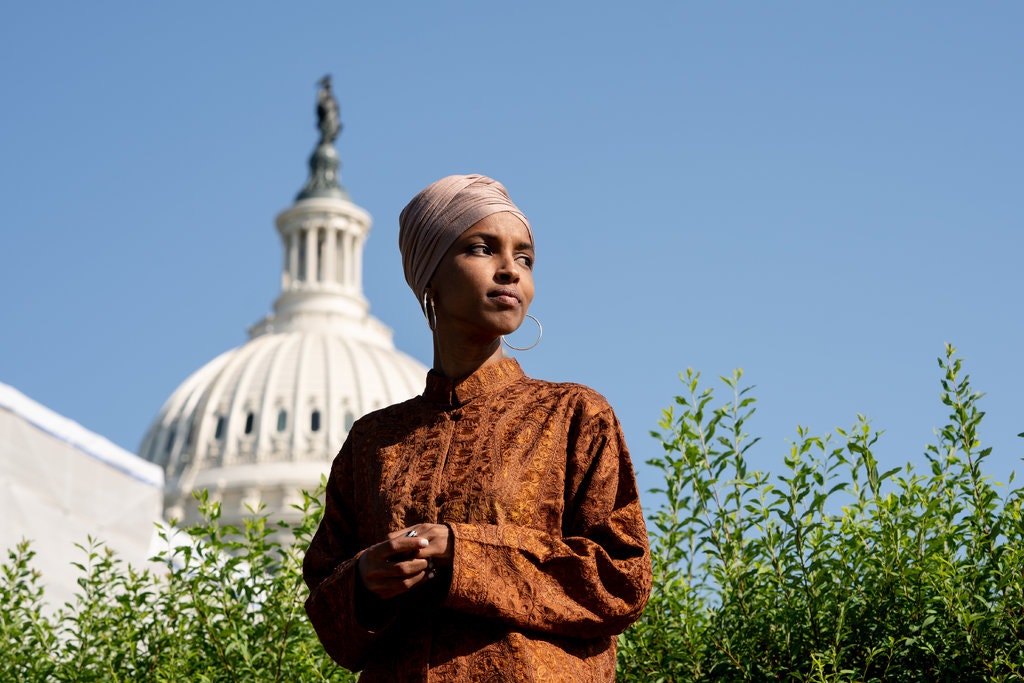 By enlisting a foreign power to take action against two American citizens, let alone elected members of Congress, Mr. Trump crossed a line that other presidents have not, in effect exporting his partisan battles beyond the country’s borders. And he demonstrated the lengths that he will go to to target his domestic opponents, in this case two of the congresswomen of color he has sought to make the face of the Democratic Party heading into his re-election campaign.

In blocking the visits of the two Democratic congresswomen, who are both Muslim, Mr. Netanhyahu cited their support for boycotting Israel, acceding to the wishes of the American president, who declared on Twitter shortly before Israel’s announcement that letting them in would “show great weakness.”

[Is B.D.S. anti-Semitic? A closer look at the boycott Israel campaign.]

The move not only inflamed the politics of both countries, it joined Mr. Trump and Mr. Netanyahu even more closely as partners against their mutual adversaries as the prime minister faces a critical election next month.

Speaking with reporters before flying to Manchester, N.H., for a rally, Mr. Trump would not say whether he spoke directly with Mr. Netanyahu about the matter but acknowledged that he “did speak with people” privately even before tweeting about it.

The congresswomen, Representatives Rashida Tlaib of Michigan and Ilhan Omar of Minnesota, are vocal supporters of the Palestinians and the movement called Boycott, Divestment and Sanctions, or B.D.S.

The president has repeatedly attacked them, along with Representatives Alexandria Ocasio-Cortez of New York and Ayanna S. Pressley of Massachusetts, at one point demanding that they “go back” to their home countries, even though they are all American citizens.

Israel’s decision was criticized not only by Democrats but also by some top Republicans, including Senator Marco Rubio of Florida. The American Israel Public Affairs Committee, a pro-Israel lobbying group, also said it was a mistake.

In a statement, Mr. Netanyahu said Israel respects Congress but defended the decision. “As a free and vibrant democracy,” he said, “Israel is open to critics and criticism, with one exception: Israeli law prohibits the entry into Israel of those who call for, and work to impose, boycotts on Israel, as do other democracies that prevent the entry of people believed to be damaging to the country.”

Mr. Trump, who has sought to elevate a handful of controversial but relatively powerless liberal freshmen of color into symbols of the opposition, promptly welcomed the decision on Twitter. “Representatives Omar and Tlaib are the face of the Democrat Party, and they HATE Israel!” he wrote.

His ambassador to Israel, David M. Friedman, said Israel had “every right to protect its borders” against activists who support the boycott movement, which he deemed “no less than economic warfare.”

Ms. Omar, who has drawn criticism even from fellow Democrats for engaging in anti-Semitic tropes in criticizing Israel, said the decision to bar them was “an affront” to freedom.

“The irony of the ‘only democracy’ in the Middle East making such a decision is that it is both an insult to democratic values and a chilling response to a visit by government officials from an allied nation,” she said in a statement. 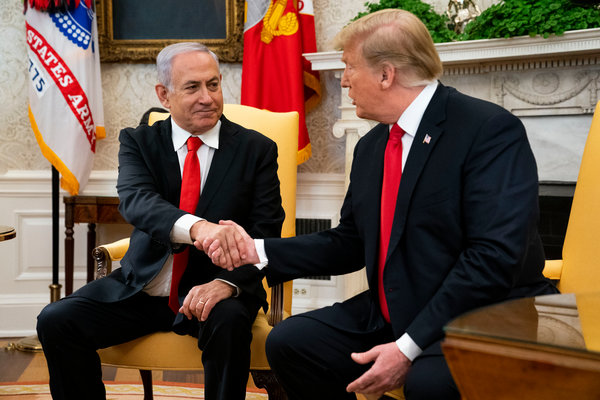 The decision put Israel at odds with Republicans like Representative Kevin McCarthy of California, the House minority leader. “I think all should come,” he said during his own visit to Israel last weekend.

Mr. Rubio also spoke out against the move. “I disagree 100% with Reps. Tlaib & Omar on #Israel & am the author of the #AntiBDS bill we passed in the Senate,” he tweeted. “But denying them entry into #Israel is a mistake. Being blocked is what they really hoped for all along in order to bolster their attacks against the Jewish state.”

Even the American Israel Public Affairs Committee, which is typically in lock step with Mr. Netanyahu, broke with him, saying that while it disagrees with Ms. Omar and Ms. Tlaib, “every member of Congress should be able to visit and experience our democratic ally Israel firsthand.” It did not mention Mr. Trump’s role, nor did Mr. Rubio.

Israel’s decision amounted to a significant reversal. Just last month, its ambassador to the United States, Ron Dermer, said Israel would not bar any member of Congress. But the news site Axios reported last week that Mr. Trump privately lobbied Mr. Netanyahu against admitting the two.

An Israeli official close to the prime minister’s office said on Thursday that a call came from the Trump administration as recently as this week pressing Mr. Netanyahu to bar the congresswomen. The official, who spoke on the condition of anonymity to discuss delicate information, said the prime minister found himself in a “lose lose” situation, having to choose between upsetting Mr. Trump or the Democrats.

Indeed, Representative Steny H. Hoyer of Maryland, the House Democratic leader who himself visited Israel in recent days, had worked with Mr. Dermer to secure the statement that no member of Congress would be denied entry and made a personal, last-minute plea to Mr. Netanyahu.

Other Democrats spent much of Wednesday lobbying Mr. Dermer, according to Aaron Keyak, a strategist who advises Democrats and pro-Israel groups. “It’s friends talking, pleading, ‘Don’t do this, it’s going to be disastrous, I’m telling you as a friend,’” he said.

But even as Israeli officials were deliberating, Mr. Trump took his demand public on Thursday with a tweet declaring that “it would show great weakness if Israel allowed Rep. Omar and Rep. Tlaib to visit.”

Experts said Israel has never before barred a member of Congress, although it did block seven French mayors and members of the European Parliament in 2017. Likewise, they could not recall a similar intervention by an American president against members of his own Congress.

“Never in the history of this relationship, and certainly not in the 25 years I’ve worked on it, have I seen a president so willfully committed not just to intercede in order to help Mr. Netanyahu and boost his electoral prospects, but to work on his own personal and political vendettas,” said Aaron David Miller, a veteran Middle East peace negotiator.

Mr. Hoyer called Israel’s decision “outrageous” and “wrong,” suggesting Mr. Dermer misled him when he assured him the two would be permitted to enter out of respect for Congress. “That representation was not true,” Mr. Hoyer said, a remarkable rebuke from one of Israel’s strongest Democratic supporters.

Mr. Netanyahu and his allies cited what they called the congresswomen’s one-sided itinerary, suggesting it had only recently come to light they were not planning to meet with Israeli officials or visit Yad Vashem, Israel’s official Holocaust museum. 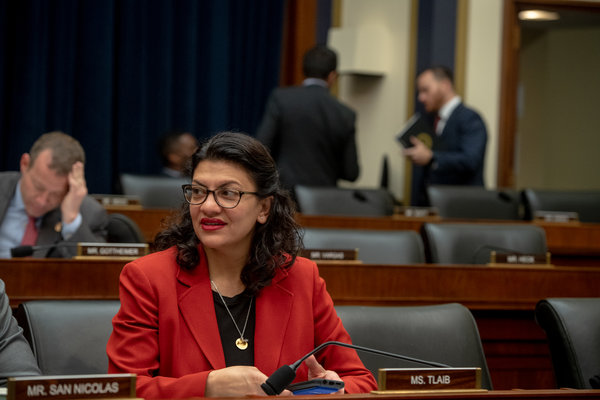 Representative Rashida Tlaib, Democrat of Michigan, is of Palestinian descent and has spoken often of her grandmother, who lives in the West Bank. (Hilary Swift for The New York Times)

Mr. Friedman, the American ambassador, said Israel’s initial decision to admit the congresswomen was an opportunity to educate them. “Unfortunately, the itinerary of the Tlaib/Omar delegation leaves no room for that opportunity,” he said.

Ms. Omar, who learned of the cancellation from news reports, had been scheduled to arrive on Saturday night. An aide said she planned to meet with an Arab member of the Israeli Parliament and hoped to schedule a meeting with Jewish members as well. The two congresswomen were to tour the West Bank, partly under the auspices of Miftah, an organization headed by a longtime Palestinian lawmaker, Hanan Ashrawi.

“What are they afraid of?” asked Ms. Ashrawi, referring to Israeli authorities. “That they might find out things?”

The congresswomen also planned to visit Hebron, Ramallah and Bethlehem, as well as Israeli-annexed East Jerusalem, including a stop at the Al Aqsa Mosque, a hotly contested holy site. Ms. Tlaib, a Palestinian American, planned to visit relatives in the West Bank and Israel indicated on Thursday that it might still allow her to come for that purpose alone.

Ms. Tlaib, who wore a traditional Palestinian gown, a thobe, at her swearing in, speaks often of her grandmother living in the West Bank. In a private email to fellow freshman Democrats early Thursday morning, Ms. Tlaib appealed to them to advocate for her to be allowed to visit her grandmother.

“She was expecting to see me in a few days,” Ms. Tlaib wrote, adding, “This decision to not allow me entry sets a dangerous precedent.”

The situation put Democrats in an awkward position of defending Ms. Omar after previously denouncing some of her statements about Israel and its supporters. Ms. Omar apologized in February after she said support for Israel was “all about the Benjamins, baby” — a reference to $100 bills.

In March, the House voted to condemn all forms of hatred after Ms. Omar said pro-Israel activists were “pushing for allegiance to a foreign country,” a remark echoing the anti-Semitic trope of “dual loyalty.”

Those remarks have given Mr. Trump and other Republicans an opening to try to break the longstanding alliance between American Jews and the Democratic Party. Last month, the House overwhelmingly passed a bipartisan resolution condemning the boycott Israel movement.

Mr. Trump has repeatedly come to Mr. Netanyahu’s assistance in times of trouble by moving the American Embassy to Jerusalem and recognizing Israeli control of the Golan Heights. In this case, Mr. Netanyahu is in a tight election campaign and analysts said he both owes Mr. Trump for past favors and still needs his support.

By allowing the congresswomen to air criticism of Israel with no counterbalance, some in his camp feared he would have appeared weak before his voters ahead of the election. But the decision divided Israelis, many of whom did not believe the explanations about the itinerary.

“Trump tweeted and the sycophant got his marching orders,” said Alon Pinkas, a former Israeli consul general in New York. “Their trip would have ended with a few tweets and Instagram photos, with nothing.”

There was, however, support for the decision on the Israeli right, with some noting that the United States once barred a far-right Israeli lawmaker who belonged to a group designated a terrorist organization.

“So the current mock outrage and disingenuous claims that this is not how allies treat each other is really just another double standard against Israel,” said Professor Eugene Kontorovich, the director of international law at the conservative Kohelet Policy Forum.