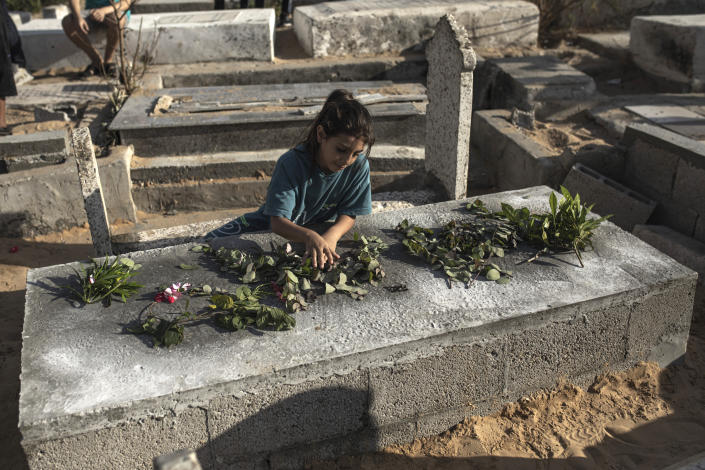 A Palestinian girl lays roses on the grave of one of the children of Nijim family at Al-Faluja cemetery in Jabalia in the northern Gaza Strip, Tuesday, Aug. 16, 2022. A Palestinian human rights group and an Israeli newspaper reported Tuesday that an explosion in a cemetery that killed five Palestinian children during the latest flare-up in Gaza was caused by an Israeli airstrike and not an errant Palestinian rocket. (AP Photo/Fatima Shbair)

JEBALIYA, Gaza Strip (AP) — A Palestinian human rights group and an Israeli newspaper reported Tuesday that an explosion in a cemetery that killed five Palestinian children during the latest flare-up in Gaza was caused by an Israeli airstrike and not an errant Palestinian rocket.

It was one of a number of blasts during the fighting that did not bear the tell-tale signs of an Israeli F-16 or drone strike, and which the Israeli military said might have been caused by rockets misfired by the Palestinian Islamic Jihad militant group.

The five children, aged 4 to 16 years old, had gathered in the local cemetery, one of the few open spaces in the crowded Jebaliya refugee camp, on Aug. 7, hours before an Egyptian-brokered cease-fire ended three days of heavy fighting.

Residents said a projectile fell from the air and exploded in the cemetery. When The Associated Press visited the site, it saw none of the usual signs of an airstrike by an Israeli F-16 or drone, adding to suspicions that the blast was caused by an errant rocket. Both the Israeli military and Palestinian rights groups said at the time that they were still investigating the blast.

On Tuesday, the Gaza-based Palestinian Center for Human Rights said its investigation of shrapnel and other evidence led it to conclude that the blast was caused by an Israeli airstrike.

“This was a missile fired from an Israeli aircraft,” said Raji Sourani, the director of the group, as he displayed pictures of what he said was a fragment showing the missile’s serial number.

Israel’s Haaretz newspaper meanwhile cited unnamed Israeli defense officials as saying the military’s investigation had concluded that the five were killed by an Israeli strike.

Asked about the Haaretz story, the military said it was still examining the event. It said that throughout the the latest round of fighting, it had targeted militant infrastructure and “made every feasible effort to minimize, as much as possible, harm to civilians and civilian property.”

At a sit-in held by family members at the site of the explosion on Tuesday, Sahar Nijm said the loss of her son Mohammed was made even more painful by the suggestion he was killed by a Palestinian rocket.

“We always heard about other massacres, but when it happens to you, you really feel the oppression,” she said. “Especially when (Israel) denies this in order to portray us as oppressors and terrorists before the international community."

Diana Nijim said her son Hamid was desperate to go outside after sheltering indoors for the first two days of fighting. She said he and the other children went to the cemetery because it was the only open space in the neighborhood where they could play.

“This is the cruelest crime in the world," she said. "This is deliberate. They want to uproot us.”

Over the next three days, Israel carried out dozens of airstrikes across the narrow, crowded coastal strip. Islamic Jihad fired some 1,100 rockets at Israel, around 200 of which fell short and landed inside Gaza, according to the Israeli military.

Hamas, a larger and more militarily advanced group that has ruled Gaza since 2007, sat out this round of fighting. apparently in order to maintain understandings with Israel that have led to an easing of a blockade imposed by Israel and Egypt after it seized power. Israel and Hamas have fought four wars and several smaller skirmishes over the last 15 years.

A total of 49 Palestinians were killed in the latest fighting, including 17 children. Palestinian rights groups say at least 36 were killed in Israeli airstrikes, with investigations still underway into the deaths of 13 others. No Israelis were killed or seriously wounded.

The Israeli military said early estimates showed that at least 20 of those killed were militants, and that 14 people were killed by errant Islamic Jihad rocket fire. That count did not include the five killed in the Jebaliya cemetery.

The day before the blast at the cemetery, seven people were killed by an explosion on a busy street elsewhere in Jebaliya. The Israeli military blamed it on a rocket misfire by Islamic Jihad, saying the army had not carried out any strikes in the area at that time. The military later released video that appeared to show a militant rocket falling short.

Video footage of the aftermath of that blast showed what appeared to be a rocket casing sticking out of the ground. When the AP visited the site, the casing was gone and the hole had been filled in. Palestinians are usually keen to display evidence of Israeli airstrikes to international media.

Palestinians with direct knowledge of the suspicious incidents have been reluctant to speak on record. The Hamas-run Interior Ministry directed journalists not to report on rocket misfires in media guidelines that were rescinded after an outcry by foreign media outlets.

Many Palestinians view Hamas, Islamic Jihad and other militant groups as freedom fighters resisting decades of Israeli military rule, and believe that criticism of such groups undermines the struggle for independence. Israel and Western countries consider them terrorist organizations because they have carried out scores of deadly attacks on Israeli civilians.

The four Gaza wars have killed more than 4,000 Palestinians, the vast majority of whom died in Israeli strikes. More than half were civilians, according to the U.N. Over 100 people have been killed on the Israeli side, including civilians, soldiers and foreign residents.