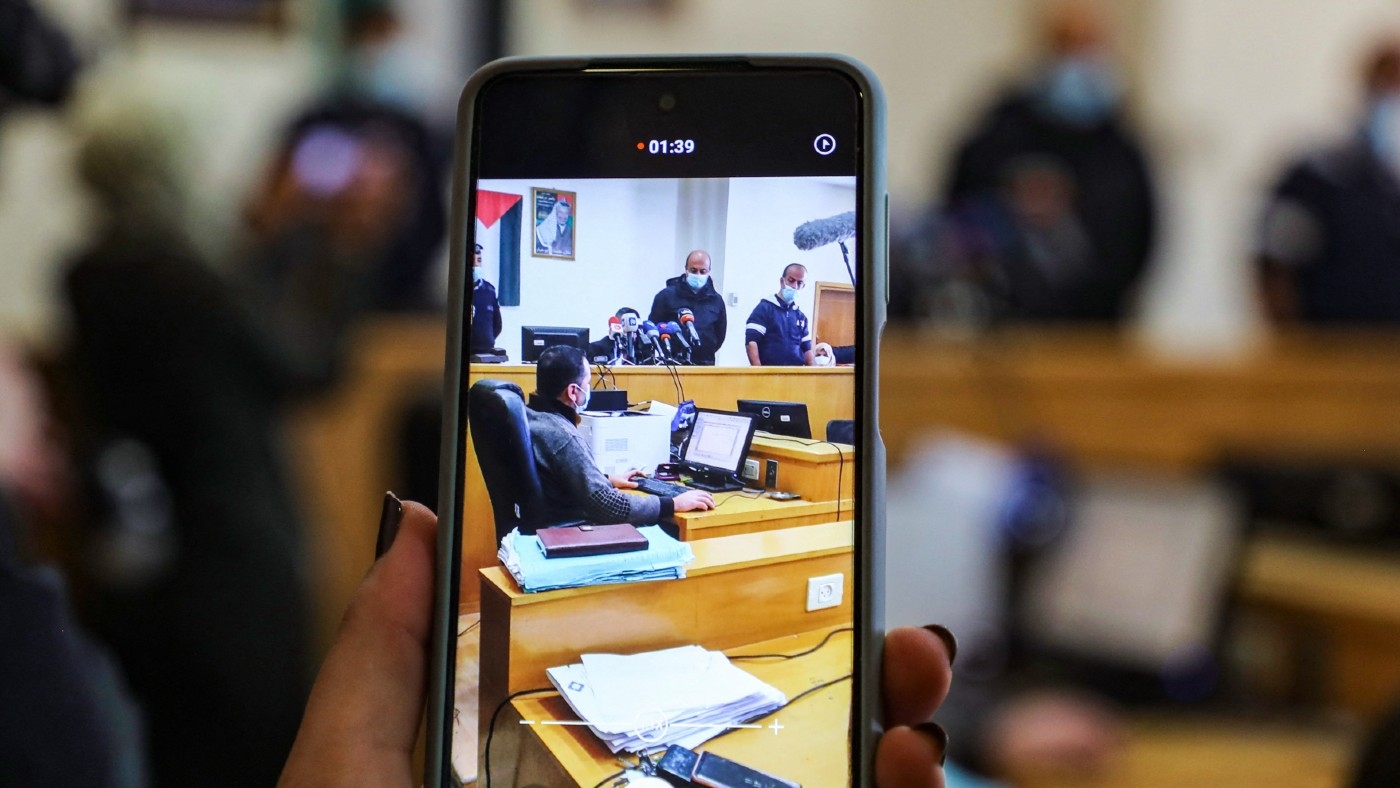 A woman uses her phone in a courtroom in Nablus, occupied West Bank in February 2021 (AFP)

Israel can listen to every telephone conversation taking place in the West Bank and Gaza, a former member of the Israeli Army’s elite signals intelligence unit 8200 has told Middle East Eye.

Every mobile or phone imported into Gaza through the Kerem Shalom crossing – in Gaza’s south – is implanted with an Israeli bug, and anyone using the only two mobile networks serving the occupied territories – Jawwal and Wataniya – is being monitored as well, the former signals intelligence member said.

At any given time, hundreds of soldiers are listening to the conversations being conducted. The audio monitoring falls into two groups. The first is Palestinians who are politically active or who represent a security threat in Israel’s view. The second level of monitoring is used by Shin Bet, the domestic security service to find “pressure points” in Palestinian society.

“It might be finding gays who can be pressured to report on their relatives, or finding some man who is cheating on his wife. Finding someone who owes money to someone, let’s say, means that he can be contacted and offered money to pay his debt in exchange for his collaboration,” the army veteran said.

“This is an entire world in which the Shin Bet can acquire power over Palestinians that ultimately forces them to collaborate or reveal things about other people, and it is all part of the system of control,” he said.

The army veteran was speaking in the wake of the Washington Post’s revelations about Blue Wolf, facial recognition technology that alerts soldiers at checkpoints to detain suspects.

The “grunt work” of this system of mass surveillance is done by Jewish Israeli soldiers who studied Arabic as part of their military service. They are monitored by Druze soldiers or Jewish soldiers of Syrian descent for whom Arabic is their mother tongue. They transcribe the conversations, whose texts are translated and sent to the army’s intelligence units and to Shin Bet.

He said there were no limits to Israel’s ability to invade Palestinians’ private and public lives. And there appear to be no limits as to what soldiers do with the conversations they have intercepted.

“Sometimes these are private conversations, maybe even intimate conversations. People who are soldiers in the army would laugh when they heard sex talk. Soldiers save the conversations and send them to their friends. This is a very harsh invasion of the privacy of every Palestinian living there,” he said.

The soldiers who do this do not regard their surveillance as a moral or ethical problem.

“The people around them, and their families, tell them that this is proper; everyone supports them. Their commander, their parents, the state, their friends… There is no reason that soldiers should think that what they are doing is not okay,” he said.

Meet Blue Wolf, the app Israel uses to spy on Palestinians in the occupied West Bank

The recent revelations about Pegasus and Blue Wolf are nothing new to Palestinians who have grown up under constant surveillance.

The mass surveillance is so routine that army high command has had to resort to create incentives to get soldiers to take photographs of Palestinians passing through checkpoints.

Prizes were said to have been offered for the units that gathered the greatest number of photos of Palestinians to add to the database described by a former soldier as the army’s “Facebook for Palestinians”.

Sometimes the purpose of taking photographs is none other than intimidation.

Muhammad Ragheb Salah, a former prisoner who spent 10 years in prison and lives in the village of Burqa, near Nablus, had photographs of himself, his ID and car, taken three times in 30 minutes at different checkpoints.

The third time this happened Salah confronted the soldier: “I got out of the car and walked over to the soldier, asking him why he was doing this. I told him that two other checkpoints stopped me just minutes ago and did the same thing, and the soldier said that he’s only carrying out military orders, and that he sends the photos he takes to the region’s military commander through WhatsApp.”

Adnan Balawna, from Nablus, said that soldiers often either pick out specific cars to photograph or choose to take pictures of all the cars that go through the checkpoint.

“It worries me when the soldiers pick me out of a crowd of many people, it gives me a lot of anxiety, especially if some attack were to be carried out against soldiers at that checkpoint or even another one on the same day, because that would put everyone who was photographed on that day under investigation. That person would be potentially subject to interrogation, even though they don’t have anything to do with what happened,” Balawna said.

Israel is coming under mounting international pressure for the use of its spyware.

The US government blacklisted NSO Group, the creator of Pegasus software, after cyber security campaigners obtained a leaked database of 50,000 phone numbers selected by NSO Group clients. Candiru, a second Israeli spyware firm, has been blacklisted. The US said  the companies’ activities were contrary to US national security interests.

Eitay Mack is a human rights lawyer who launched  a campaign to expose secretive Israeli arms sales, demanding that the country’s Ministry of Defence release documents and records pertaining to the sale of weapons and military systems to countries under military embargo, engaged in civil wars and in systematic violation of human rights campaigns. The Supreme Court rejected his petition regarding tracking technology made by an Israeli cyber company, and also shut the door on all future petitions.

‘I am under surveillance everywhere… my life is now on livestream for them to see at will, nothing is private anymore’

Mack said: “From the Shin Bet standpoint, every Palestinian is a threat. They are particularly bothered by nonviolent activists, because such people can lead a popular movement and generate widespread protest, while also evoking sympathy in the international community.

From that standpoint, there is no Palestinian who is not a threat. No Palestinian can be free of this,” Mack said.

Mack said this was not about monitoring or preventing attacks from Palestinian militants.

“They know how to deal with terrorist organisations, but what worries them most is civil society organisations, because they could lead to an end of the occupation and they garner sympathy in the international community.”

Issa Amro, a Palestinian activist from Hebron, said that what is new is that surveillance can now be carried out by the ordinary soldier and by settlers.

“This is what’s new – the soldier now knows everything about me before I even meet him. I’ve been personally photographed by them countless times, and through their programs they can know who I am before I reach a checkpoint.”

Settlers also have a special camera system: “I might be walking down the street and be assaulted and beaten by settlers because my name is Issa. I am under surveillance everywhere; in the street, at home, on checkpoints, anywhere. They even know about my comings and goings, my life is now on livestream for them to see at will, nothing is private anymore.”

*Atif Daglas contributed to this story