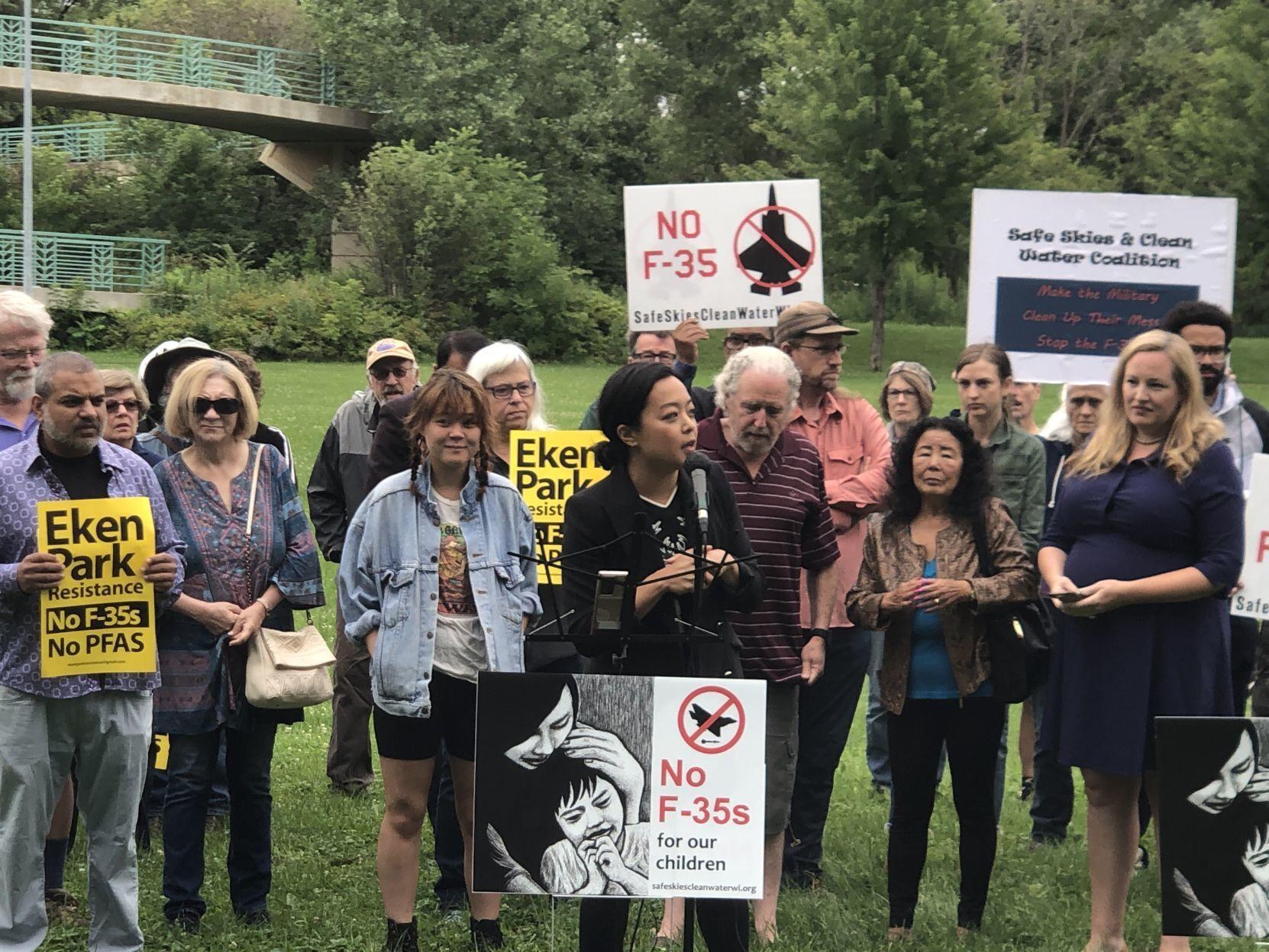 One goal of this letter is to bring organizations on the national and international level together with local organizations who have been working against F-35 training in their communities for years. Another is to use the F-35, the most expensive weapons program in history, to address the larger issue of unchecked military spending. The F-35 is causing harm at home and abroad in primarily working class and BIPOC neighborhoods. We hope to begin a substantial and sustained campaign to cancel the F-35 program.

We, the undersigned organizations from around the world, are calling for a cancellation of the F-35 program, an end to F-35 training in residential areas like South Burlington, Vermont and Madison, Wisconsin, and a reinvestment of the project’s funds to life affirming programs. We are making these demands based on the harm caused abroad, cost of the program to the taxpayer, inefficiencies and failures, the environmental impact of F-35s, and the effects training has on local communities.

We primarily stand firmly against the F-35 as a weapon of war. Although not ready for full-scale production, the U.S. intends on producing countless F-35s to sell around the world that will without a doubt be used to harm people living in the Global South. F-35s have the capacity to carry nuclear weapons, and the deployment of these jets only aids nuclear proliferation. The U.S. already makes up 40% of the global arms trade, aiding and abetting war crimes all over the world. Israel is procuring F-35’s from the United States which will undeniably be used against Palestinians to further Israel’s goals of ethnic cleansing and displacement in Palestine. Saudi Arabia has expressed interest in F-35s as well as the UAE while both countries wage a brutal war on Yemen. The F-35 is a disaster of a project, but also  a potential disaster for humanity.

The F-35 spending is becoming impossible for important members of Congress to justify. The Chair of the House Armed Services Committee, Rep. Adam Smith called the F-35 a “rathole.” Another member of HASC, Rep. John Garamendi had some scathing comments about the F-35 in a HASC subcommittee hearing in May:

“For the contractors out there, what are you doing? Why can’t you give us a piece of equipment that actually works? You should never have a contract. And for Lockheed, you want a five-year maintenance contract? You can’t do what you’re doing today. Come on. What are we thinking? If I have not adequately expressed my frustration, I would assume that my frustration is less than the frustration of the pilots and the maintainers out there. … The primary maintenance responsibility on this is Lockheed and you gentlemen.”

The signatories call attention to the failures of the program to address harmful projects seeing never ending investment while programs that protect people such as universal healthcare never see the light of day.

COST TO THE TAXPAYER

The failures of the program make the spending impossible to justify, even from a militaristic standpoint. The F-35 program is the Department of Defense’s most expensive weapon system program. As of now, the F-35’s projected total cost is $1.7 trillion, which includes $1.3 trillion in estimated operations and sustainment over 66 years.  The F-35 is horribly behind schedule, experiencing massive cost overruns with maintenance costs doubling.  The F-35 is not ready for full scale production. According to the GAO, “if DOD moves forward as planned, it will have bought a third of all F-35s before determining that the aircraft is ready to move into full-rate production.” Spending billions to trillions of dollars on a plane that is not yet up to speed with what the government has requested is poor fiscal policy.

F-35s also have a significant impact on the environment with their high carbon emissions and pollution on local bases. The F-35 uses a significant amount of fuel – about 2.37 gallons of fuel for every mile traveled and around 1,340 gallons of fuel per hour. This is particularly egregious compared to the F-35’s predecessor, the F-16, which used at least 415 gallons of fuel per hour less. One single F-35 tank of gas produces the equivalent of 28 metric tons of carbon dioxide. These emissions heavily pollute air and water sources in basing locations in the U.S. and abroad. Base site construction for F-35 training in the U.S. has also disregarded the need for environmental remediation of pre-existing contaminants such as PFAS, risking further pollution of surrounding communities. F35 pollution is an environmental justice issue, as they are disproportionately tested, trained, and deployed in low-income communities of color.

These environmental impacts do not even account for the role of the plane in active combat. As they’re deployed around the world, we see Lockheed Martin’s jets subjecting communities globally to egregious noise levels, environmental contamination, and the risk of nuclear warfare. The F-35 is also a part of the U.S. strategic nuclear bomber force, possessing the capability to carry and deploy the B61-12 guided nuclear bomb. If deployed, this bomb – and all other nuclear weapons – would have catastrophic long-term environmental consequences.

Currently, F-35 training in Vermont disrupts the lives of working-class people. The training is irregular and Vermonters go without warning of when these trainings will take place.  The noise caused by the F-35 hits 115 decibels which especially hurts and injures infants and children, the elderly, and the disabled. The F-35 has 300 to 600 takeoffs and landings a month.

Let’s consider the City of Winooski, VT. More than half the city is within the US Air Force designated 5.2 mile by 1.2 mile oval-shaped F-35 noise target zone centered on the runway. Winooski is a working-class city, the most densely populated in Vermont, with the state’s most ethnic diversity. As reported by the US Air Force itself in 2013, repeated exposure to military aircraft noise at the level of the F-35, can damage hearing. The Air Force also reported that the much lower aircraft noise level produced by civilian aircraft was still sufficient to impair the learning and cognitive development of children living in the flight path of heavily used commercial airports. The US Air Force identified the entire oval-shaped noise target zone as an area “generally considered unsuitable for residential use.” So it was no secret for the state’s political and military leaders that locating the F-35 at BTV would cause pain and injury to children and adults on a mass scale.

In Madison, where the F-35 is likely to deploy in the next few years, Physicians for Social Responsibility Wisconsin has identified the following risks to children from noise and air pollution:

In addition, adults as well as children would face increased risk of:

For all the aforementioned reasons, we, the undersigned organizations, reject the government’s reckless over investment in the F-35 program and demand its immediate cancellation. The costs of this program to the taxpayer, the environment, local communities, and the communities upon which the US and its allies will wage war are too high to justify. It is time for the government to prioritize the welfare of human beings and the planet over military superiority and the weapons industry’s profits.

We call on our policy makers to cancel the F-35 program, cancel training within the U.S. and reinvest that money into universal healthcare, student debt forgiveness, housing guarantees and more.