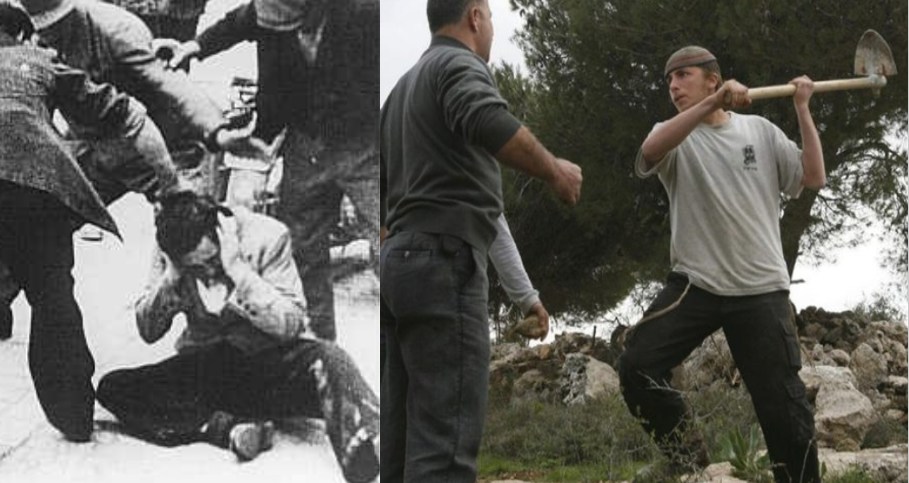 Today, Sunday, May 29, the Jewish state of Israel will carry out a government-sponsored pogrom on the Palestinian residents of Jerusalem. “Jerusalem Day,” the annual Israeli celebration of the conquest and illegal annexation of the Old City and “East” Jerusalem, has been called the “national holiday of the settlers.” If Independence Day on May 15 marks the UN vote in 1948 that approved (with no authority) the establishment of the state of Israel on the majority of historic Palestine, then Jerusalem Day, by contrast, marks the displacement of the Palestinians from Palestine — the Judaization of Palestine whose flip-side is de-Arabization, the erasure of the very Palestinian Arab presence in the country. Just two weeks ago the Israeli police attacked the funeral of the murdered Palestinian journalist Shireen Abu Akleh and tore the Palestinian flag off her casket; it is illegal to display a Palestinian flag in an Arab city in a historically Arab country that still has an Arab majority despite Israel’s massive expulsions and displacement.

Jerusalem Day is when Israel annually reaffirms this message, and it uses the religious settlers as its eager messenger. The Russian government and the others of Eastern and Central Europe sponsored hundreds of pogroms against their Jewish communities with exactly the same message, albeit with the emphasis on “get out or die.” Jews were ideally controlled, contained and intimidated into submission by the population rather than by the military or police, populations inculcated with virulent anti-Semitism. Israel uses its religious settler population, including pupils from virtually every Jewish religious school in the country, for the same purpose, supported by governments elected by an Israeli Jewish population inculcated by a virulent hatred of “Arabs,” seen as “terrorists” whose elimination is therefore justified.

Pogroms against Palestinians are daily occurrences, of course. Even the United States has protested against “settler violence,” the euphemism used for progroms. But government-sanctioned pogroms – military attacks on densely-crowded refugee camps or the Gazan concentration camp of 2 million people; the displacement of entire populations such as that of Masafer Yatta, approved by the Supreme Court; massive demolitions of Palestinian homes and confiscation of land; nightly raids on sIeeping families to “demonstrate a presence”; detention of thousands of Palestinian children and teens; a virtual hunting season on Palestinian men; the storming of al-Aqsa mosque – are carried out by official arms of Israeli state terrorism, whether the legal system and the courts, the military or police, or their settler agents.

Tomorrow’s pogrom will see thousands of religious Israelis (primarily kids, the ones still in need of indoctrination) carrying Israeli flags through the Damascus Gate and down the main street of the Muslim Quarter shouting “Death to Arabs!”, damaging stores, businesses and homes, and attacking any Palestinian they find in their way. True, there will not be mass murders tomorrow as there were in European pogroms, but there will be mass murders, simply spread out over the mini-pogroms carried out daily. Diluted rather than concentrated killings. Israel killed 319 Palestinians in the Occupied Territory in 2021, 71 of them children, according to the Israeli human rights organization, B’tselem.

Your media may or may not cover the “March of Flags” on tomorrow’s Jerusalem Day. But a state-sponsored pogrom is about to happen.

Thank you for your continuing support.