Alternative Memorial Day, a binational tradition since 2005, is a sign that we are capable of taking down the walls of fear. 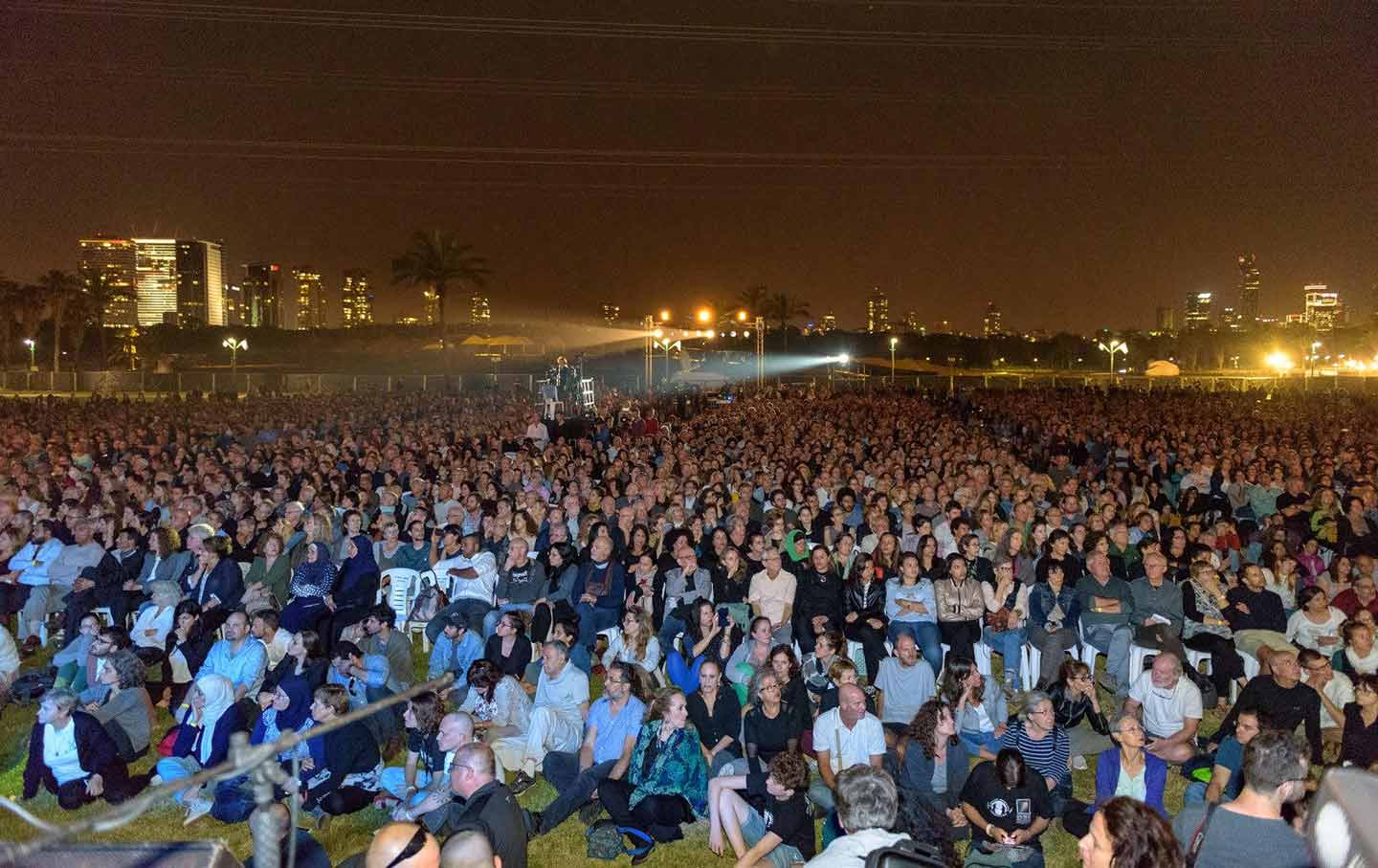 Mourners and supporters at the Alternative Memorial Day ceremony in Israel on May 7, 2019. (Photo by Tatyana Gitlits)

Mourning is a personal matter. When it comes to mourning victims of war, terror, and state-sponsored suppression, mourning is also a political matter—especially in Israel and Palestine. We, a Palestinian man from the West Bank who served 10 years in an Israeli prison and an Israeli woman who served in the Israeli army, are not supposed to care about each other’s dead. We are taught this constantly. But, out of a commitment that is both concretely political and inherently human, we have decided to reject this logic and fight for a public space in which we can feel pain for the dead on all sides.

This year, as every year for the past 14, the organizations Combatants for Peace (CFP), in which both of us writing this article are active (S.K. as a founder and A.C. as an organizer), and the Parents Circle–Families Forum held an Alternative Memorial Day ceremony on Israeli Memorial Day. Proud to take part in this practice, we stood with over 9,000 people who came to support families in mourning from (Green Line) Israel, the West Bank and—over video conference—from Gaza. Each loss is different. Some mourn IDF soldiers killed in battle; others, Palestinians who died at the hands of Israeli forces. But our message is shared: We refuse to allow our bereavement to be manipulated for nationalistic purposes and we insist that, despite all complications of asymmetry and power gaps, we have a right to recognize one another’s losses.

As someone who grew up in the Israeli school system, I, Avigail, have always experienced our national Memorial Day as the annual pinnacle of militaristic culture, an aggressive indoctrination into the idea that we must live by the sword and maintain control over another people in order to survive. Over the years, more and more Israelis have come to share this alienation that I feel. In 2005 one bereaved father named Boma Inbar, who lost his son Yotam in the first Lebanon War, decided to initiate a ceremony in which bereaved parents from both sides would come together. Everything about typical Israeli memorial ceremonies—the music, the choreography, the speeches—serves to entrench the notion of “divide and conquer” into our very emotional anatomy. It was this practice that Inbar wished to oppose, not merely through verbal criticism, but by replacing it with a new ritual practice that Israelis and Palestinians would build together. The first time it took place, the ceremony was small, almost negligible, attracting only 200 participants, but it has grown every year since.

As a Palestinian, I, Sulaiman, have never had a state-sponsored Memorial Day, since I am not a citizen of any state. I do not reject the mourning practices that we do have within our community—martyrs’ funerals, for example. Still, I seek rituals beyond them, ones that help me connect to a larger human story and that have potential to save lives in the future. Having been attracted to violent resistance as a youth, it was not easy for me to join the Alternative Memorial Day ceremony, which my organization CFP did in 2005. Thus, I can empathize with the objections that other Palestinians voice in response to our binational ceremony. Nonetheless, without erasing the difference between occupier and occupied, this binational ceremony is the place where I feel that I am truly honoring the great number of close friends and family members that I lost to the occupation, and where I see that I am being heard. 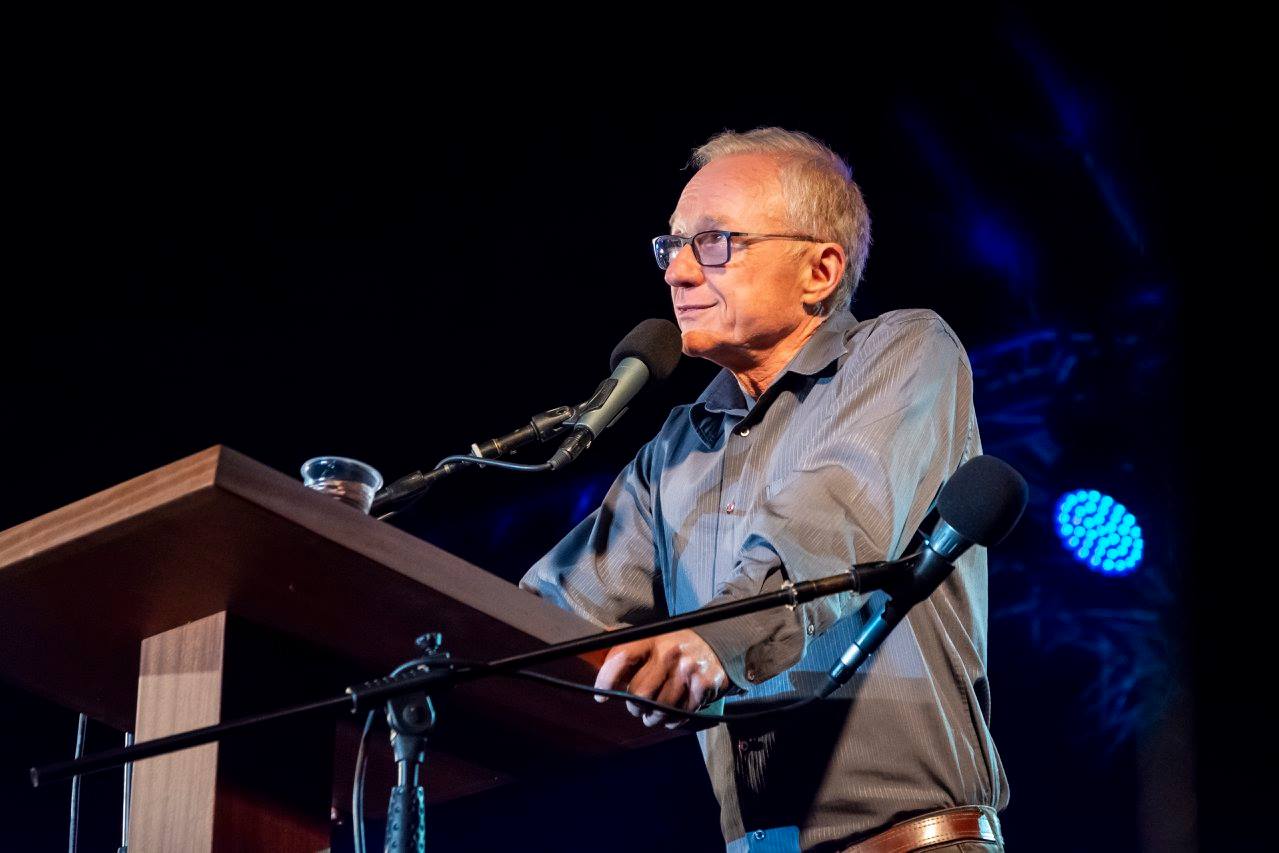 Related Articles
• In Gaza, the Bombs Have Stopped, but Our Suffering Continues, Ahmed Abu Artema
• The Palestine Marathon, Jen Marlowe

Beyond an opportunity for authentic bereavement, we both believe in the political power of this ceremony. There is no greater testament to its potency than the scale of government opposition that it has come to provoke—mostly among Israelis, who sometimes compare the ceremony to mourning Holocaust victims alongside dead Nazi soldiers, but also among Palestinians, who accuse us of normalizing relations with an oppressive government. We know that our choice is difficult for some members of both groups to accept and we recognize that there is risk involved. But, as just about anyone who has been to the ceremony can say, it is a transformative experience, one that changes people’s minds about what is possible in this region. It is a way of seizing the tremendous power of public rituals away from self-serving, manipulative government leaders and putting this power into the hands of everyday people, the victims of conflict.

The group that is most vehemently—obsessively—opposed to our ceremony is the Israeli right wing. A few days before the ceremony this year, as happens every year, Prime Minister Benjamin Netanyahu tried to shut down the ceremony completely, using any means at his disposal. He personally demanded that the roughly 180 Palestinians from the West Bank planning to take part in the ceremony, most of them mourning personal losses, be denied entry into Israel. Thankfully, the Supreme Court overturned Netanyahu’s orders and allowed 100 Palestinian participants to join us. Yet our troubles didn’t end there. The Netanyahu populist base went into a frenzy, threatening us on social media. Yair Netanyahu, the prime minister’s son, had especially choice words to share: “The bereaved parents who participated in the Alternative Memorial Ceremony are psychologically disturbed.” Sadly, Netanyahu’s incitement succeeded in bringing some to the streets, as it does every year. Several hundred right-wing activists showed up at the ceremony to hurl insults at us, and sometimes even rocks.

Despite all of these efforts at suppression, and crass calls for violence around us, on Tuesday, May 7, the ceremony came together and we witnessed that same source of light that carries us from year to year. That evening, we heard 14-year-old Mohammed Darwish, from the ‘Ayda refugee camp in Bethlehem, remember his close friend Abed Elrahaman Shadi Abdallah, who was killed by a stray bullet during a conflict with Israeli forces in the camp. At the time, Abdallah was only 12 years old. At the ceremony, Darwish recalled the details of finding his young friend lying dead on the ground, covered in blood, and said, “My friend, Abed Elrahaman, I know that you know where I am right now and that I am talking about you, and that I am telling the story of your death to thousands of people who believe in humanity. So, you should know, your death will not be meaningless. My young friend, one bullet ended 12 years of friendship, laughter and play…. I choose to eternalize your memory by working for peace.” At another moment in the ceremony, we heard from Yuval Rachamim, whose father, Avraham, was killed in the war of 1967: “Gradually [at Israeli Memorial Day ceremonies], I came to understand that I am a prop in someone else’s play. The combative, self-victimizing rhetoric reinforces and sanctifies a struggle that will never end. Every year, politicians…turn our searing pain into an election campaign and recruitment session for the next unnecessary war.” 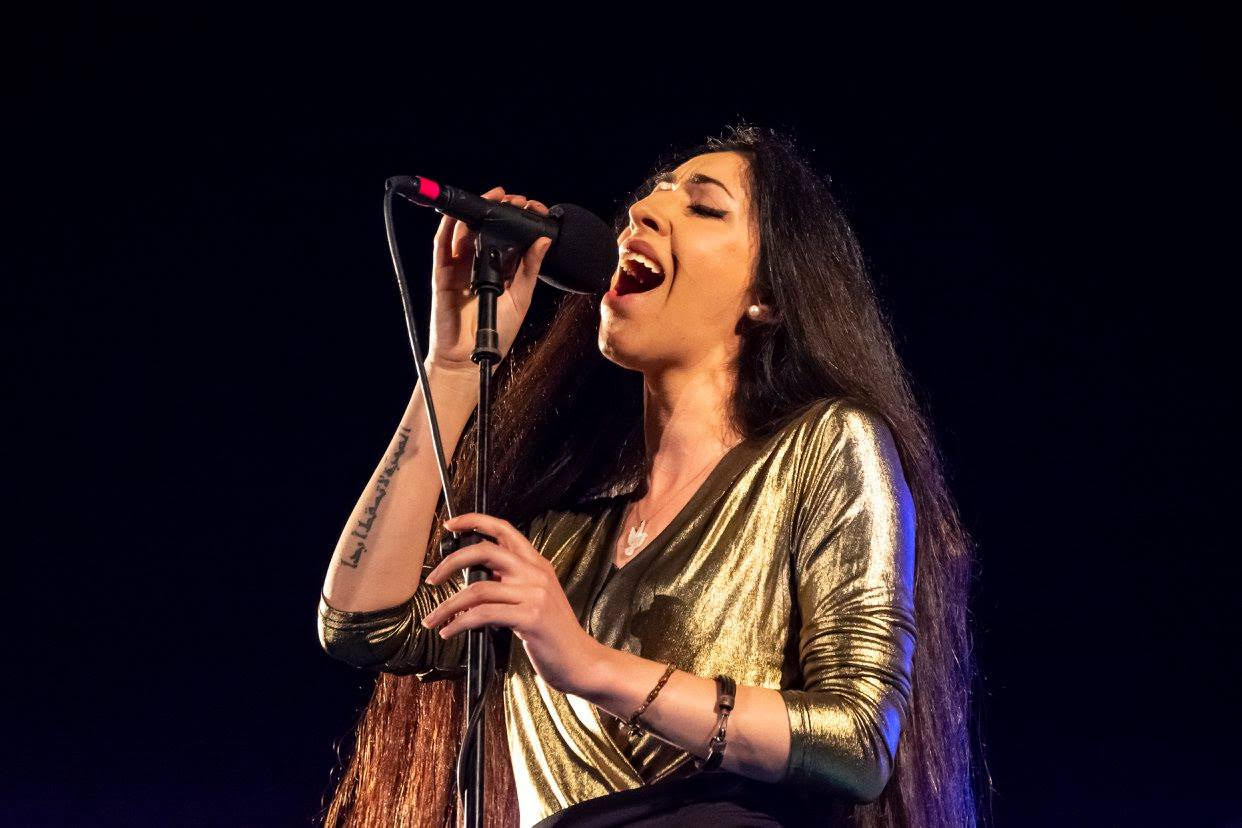 The singer Miriam Toukan at the Alternative Memorial Day ceremony in 2018. (Photo by Tatyana Gitlits)

It is worth asking: Why does the prime minister need to personally intervene with military orders, and his followers with violence, in an attempt to prevent these words from being heard on the same stage? Perhaps Netanyahu feels so threatened by our ceremony because he knows what we know: Binational mourning is a sign that Palestinians and Israelis are capable of taking down the walls of fear that he works so hard to erect and maintain, and that we are able to find our own, independent moral compass, even in dark times. We know that the moral insight born of our ceremony is not enough, on its own, to change reality here; but we also know that no real change can happen without it.

As we look across the seas and watch Muslims and Jews being killed—albeit under very different circumstances—by white-supremacist terror in Christchurch, New Zealand, in Poway, California, and in Pittsburgh, Pennsylvania, we invite mourners to join in our practice. It is imperative to remember the dead. It is transformative when we remember them together.

Avigail Corry
Avigail Corry is a BA student in Hebrew language studies at Ben Gurion University in the Negev and, beginning in the fall, will teach at a bilingual Hebrew-Arabic elementary school in Jaffa. She is an activist in Combatants for Peace as well as the movement Standing Together, where she focuses on issues of racial equality within Israel.

Sulaiman Khatib
Sulaiman Khatib was born in Hizma, near Jerusalem, and currently lives in Ramallah. At the age of 14, Khatib was imprisoned for participating in the stabbing of Israeli soldiers. When he emerged from prison at the age of 24, Khatib and his friends, also former prisoners, met with Israeli soldiers who had made a parallel decision to renounce violence. Together, they founded the organization Combatants for Peace in 2006. He is currently writing a book about his experiences and his vision.