Palestinians living under Israeli military occupation have long dealt with the kind of brutality being enacted by some US police officers against African-Americans. 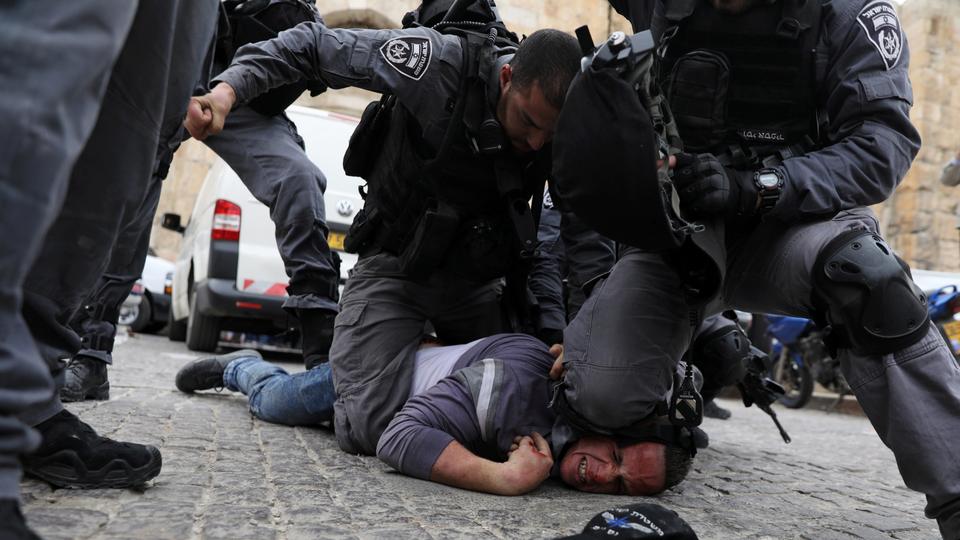 A now infamous image of a white police officer kneeling on the neck of an African-American man, who would later die, has caused global outrage and violent unrest across the US.

Caught on video, George Floyd’s death was seemingly the straw that broke the camel’s back in that it came after several other high profile killings of several other African-Americans either by police or suspects who did not face immediate legal consequences.

For one community, the disproportionate violence faced by black people at the hands of US police forces has special resonance as it reflects their own experiences with the authorities.

For Palestinians living under military occupation in East Jerusalem and the occupied West Bank, the worst excesses of the kind seen in the US recently, are a near everyday occurrence.

In the aftermath of Floyd’s killing, Palestinians were quick to draw parallels between the final images of the man suffering under the knee of the officer, and similar choke holds used by Israel occupation forces.

“Crazy how the same thing happens in Palestine but the world chooses to ignore it,” Palestinian athlete Mohammad Alqadi wrote on his Twitter above four separate images of Israeli soldiers pinning Palestinians to the ground with their knees on their necks or head.

The similarities do not end there, as some activists have drawn parallels between the way US police have handled protests against police brutality in the aftermath of Floyd’s death and the way Israel has dealt with protests in Gaza.

Such comparisons come with caveats, as US police officers despite the controversy over their tactics have yet to kill anywhere near the numbers Israel killed in the Gaza right of return protests in 2018, for example. Nevertheless, some of the tactics used are the same, according to pro-Palestinian groups.

On Twitter, the BDS and Palestinian Solidarity working group within the Democratic Socialists of America wrote:  “The police violence happening tonight in Minneapolis is straight out of the IDF playbook. How many times have we seen uprisings in Gaza met w/ a storm of tear gas? How many times are Palestinians in the West Bank doused w/ skunk water during a protest? US cops train in Israel.”

Crazy how the same thing happens in Palestine but the world chooses to ignore it pic.twitter.com/7wddf9tUYb

Amnesty International has warned that hundreds of police departments have been training in Israeli alongside military officers, who “have racked up documented human rights violations for years.”

The rights group notes that one of the departments involved in the training, the Baltimore Police Department, had been cited by the US Department of Justice for “widespread constitutional violations, discriminatory enforcement, and culture of retaliation.”

Both Amnesty and the US State Department have cited incidences of Israeli security officials engaging in brutality against Palestinians.

The rights group said: “Baltimore and other police departments should find partners that will train on de-escalation techniques, how to handle mentally challenged or ill citizens, on the constitutional rights of citizens concerning filming and how to appropriately respond to those using non-violent protest to express their opinions. Israel is not such a partner.”

Palestinian activist Huda Ammori of the Apartheid off Campus group told TRT World that such links between “militarised” US police forces and the Israeli security establishment emphasised the need for unity between African-Americans and Palestinians.

“We’re seeing the oppressors united with their training, their same techniques. Between the Black Lives Matter community and the Palestinian community, and other communities across the world, we need to unite to fight against these systems.” Ammori said.

“It’s the same systems of oppression that are affecting all of these communities…we must fight back together.”