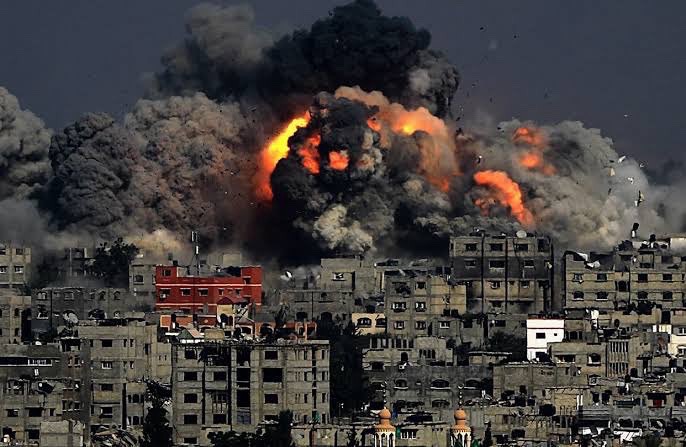 IT IS AMAZING! I stopped watching Ukraine after a while because I couldn’t. It reminded me of what happened in Palestine to the Palestinians. As a child myself, I remember when my Mother was given a baby to take care of. They picked him up while he was nursing from his dead mother on the ground. That happened when all the villagers were fleeing from the shelling. Deir Yassin was completely wiped out with everyone in it. You probably know about that as it is in the history books now. I don’t believe the Ukranians have gotten to that point yet, because they are getting a lot of help from outside. I do see the similarities though. May God help us all. — LN

The author doesn’t mention it, but the ironic icing on the cake is how videos and images purporting to show the war in Ukraine are actually from Palestine. Just today I heard of two that showed Israel attacking Gaza, and Ahed Tamimi confronting soldiers as a child. Even though she was speaking in Arabic, the blond hair was irresistible. — BO

1. The people of Ukraine are “European people with blue eyes and blonde hair being killed” while Palestinians are Arab and have a darker complexion. Lesson one, empathy and recognition of pain and suffering is color-coded and race still matters in 2022.

2. Palestine, like Afghanistan, Iraq, Somalia, and Syria where violence is normal and death is “baked” into the culture while Ukraine is a “European city” that is modern and advanced and these things are not supposed to happen in this area. Lesson two, Western and European history is but a long series of erasures, amnesia, and deeply held views of exceptionalism.

3. Volunteering to fight in defense of Ukraine from outside is a heroic act, which indeed it is, but volunteering to resist settler colonialism and Apartheid is framed as “terrorism” by Western powers. Lesson three, Palestinians are demonized no matter what heroic acts they undertake.

4. When an officer in Ukraine blows himself and destroys a bridge to prevent the Russian from advancing then he is celebrated for this sacrifice. Lesson four, Palestinians are demonized for merely being Palestinians, and any and all resistance are framed as terrorism. 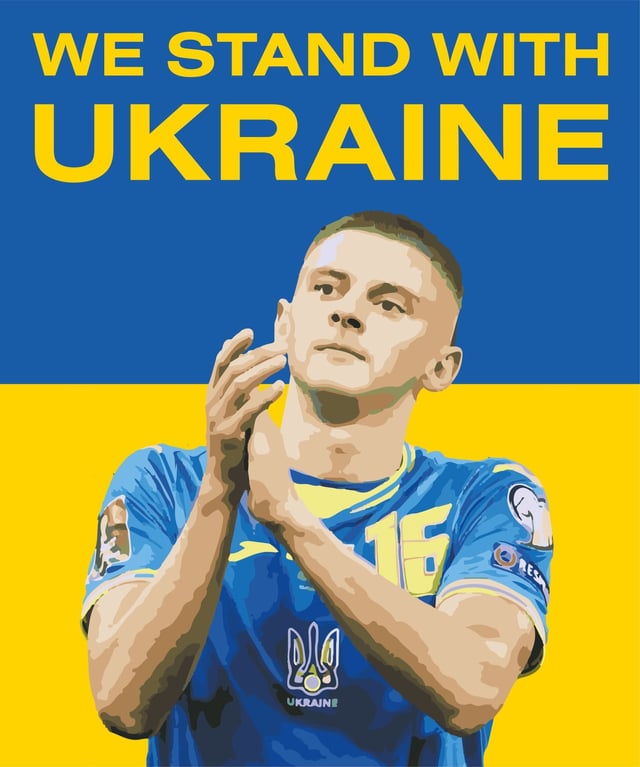 A banner featuring Everton player Vitaly Mykolenko and the quote ‘We Stand with Ukraine’ was unveiled during a match between Everton and Manchester City.

5. Sports teams and famous sports figures can express solidarity and carry the Ukrainian flag, post messages on the electronic boards, and demonstrate this on the playfield, which is all very positive and players should have the right and ability to do it. However, Palestine is an exception when it comes to sports figures expressing any support for the Palestinians who are living under settler-colonial occupation structured with an embedded Apartheid system of racial-religious segregation. Lesson five, the sports administrative structure hands out fines and sanctions (red card) for anyone who expresses support for Palestine including on the occasion of fans hoisting Palestinian flags in the stands.

SEVILLA STRIKER Frédéric Kanouté was fined $4,000 by the Spanish football federation for a T-shirt supporting Palestine during a match in 2009.

6. Calls for sending weapons to Ukraine so as to resist and fight Russian invasion and occupation are supported and expressed as a fundamental right for people facing such an enemy. Anyone who calls for supporting the Palestinians by sending military equipment or items to strengthen the resistance is criminalized and often imprisonment under the spacious law designation of material support. Lesson six, Palestinians don’t have the right to defend themselves but must accept to be occupied and the world community is committed to funding and extending all types of support to the settler-colonial occupier.

8. Media coverage rightly focused on the victims of the Russian invasion and the human stories with people taking weapons to defend their families, homes, and cities. Palestine always faces the media coverage that amplifies, humanizes, and centers the narrative of the settler-colonial occupation, while erasing or often problematizing Palestinian narrative in the often deployed euphemism of death during “clashes”, Israel having the right to defend itself or responding to rocket firing. Lesson eight, Palestinians are made to be the guilty party for wanting to live on their land and having the audacity to insist on it. Double standard and culpability of the Western world in furthering settler colonialism in Palestine.

9. Educational institutions across the Western World expressed solidarity with Ukraine, again rightly so when a people face an invasion. Last April-May period, Israel launched a massive attack on the Palestinians on the holiest night of Ramadan, the 27th Night of Ramadan, then followed by a massive bombardment of Gaza. When faculty members, departments, and students at universities expressed solidarity with Palestine and Palestinians, a steady stream of political figures, University presidents and media figures insisted that colleges and universities should not be politicized and to make sure that their internal policies prevent them from expressing such solidarity positions. Lesson nine, Palestine on college campuses always meets the administration, Zionist and settler-colonial checkpoints that are structured to prevent solidarity with the Palestinians.

10. The push for boycott, divestment, and sanctions on Russia are moving faster than the speed of light and often by the same set of characters that pushed for legislation to criminalize and punish the Palestinian BDS movement. Lesson ten, Palestine faces the constant double standard on the BDS front, free speech, and constitutional rights. No clear evidence of double standard than to listen to the same individuals and groups who now are on the front line of seeking legislation to authorize BDS effort directed at Russia while on record opposing the Palestinian BDS Movement.

Hatem Bazian is a co-founder and Professor of Islamic Law and Theology at Zaytuna College. In addition, Prof. Bazian is a lecturer in the Departments of Near Eastern and Asian American and Asian Diaspora Studies at the University of California, Berkeley. In Spring 2009, Phe founded at Berkeley the Islamophobia Research and Documentation Project at the Center for Race and Gender. Dr. Bazian is a founder and national Chair of American Muslims for Palestine, board member of the Islamic Scholarship Fund, Muslim Legal Fund of America, President of Dollar for Deen Charity, and Chair of Northern California Islamic Council.