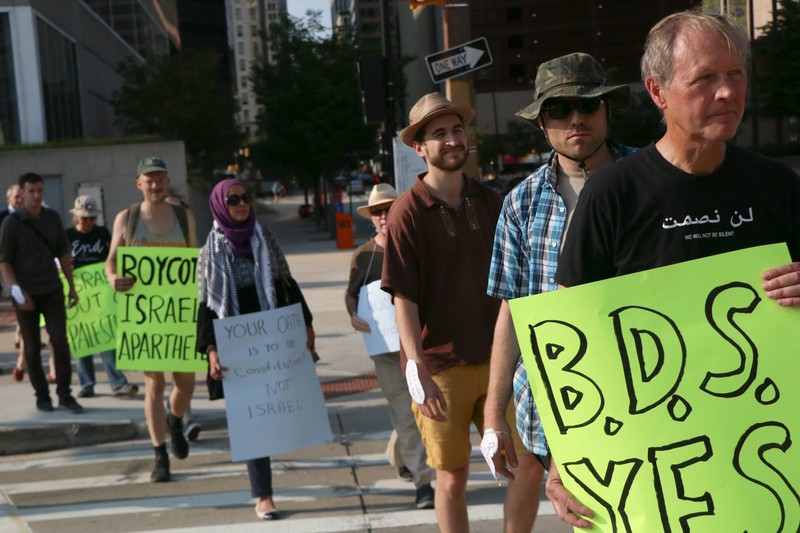 Activists at a 26 July rally in Baltimore protest the Israel Anti-Boycott Act, which was introduced by Maryland’s Senator Ben Cardin. New York’s Senator Kirsten Gillibrand pulled her support for the bill on 1 August. (Elizabeth Woodson/via Facebook)

In an act unprecedented in recent history, US Senator Kirsten Gillibrand took a stand this week in support of the right of Americans to boycott Israel by formally withdrawing her sponsorship of S.720, the Israel Anti-Boycott Act.

The New York Democrat’s withdrawal of her sponsorship comes after constituents repeatedly pressed her on her support of the bill at town hall meetings in New York City.

On 22 July in the Bronx, Gillibrand affirmed that “we are all allowed to boycott” in response to a constituent who laid out his concerns that the bill would criminalize those supporting boycotts of Israel.

At another town hall in Queens on 31 July, Gillibrand stated in response to similar concerns that she would not support the bill in its current form. She made good on her promise by notifying the Senate on 1 August that she wished to withdraw her sponsorship of the bill.

It is exceedingly rare for members of Congress to withdraw their sponsorship from bills. One veteran congressional staffer could recall only one instance of it happening in recent memory when a representative took his name off a bill regulating minor league baseball.

This dramatic reversal in Gillibrand’s stance is due to a combination of factors. On 17 July, the American Civil Liberties Union released a strongly worded letter it had sent to members of Congress urging them to oppose the bill, which it termed a “direct violation of the First Amendment.”

The ACLU’s letter ignited a firestorm over the bill and galvanized activists to oppose it.

Local organizations such as WESPAC, Adalah-NY, Jewish Voice for Peace-Westchester and Peace Action NY successfully mobilized to make this bill a central issue at the senator’s town halls. And in conjunction with this grassroots effort, national organizations such as the US Campaign for Palestinian Rights sent action alerts to New Yorkers deluging Gillibrand’s office with phone calls and emails.

As first reported by The Electronic Intifada in April, the Israel Anti-Boycott Act is a chilling manifestation of attempts to criminalize Palestine solidarity work and the most draconian of the dozens of anti-BDS bill introduced in recent years.

The powerful Israel lobby group AIPAC has made the bill one of its top legislative priorities.

It would impose fines of up to $1 million and criminal penalties of up to 20 years in prison against any US person, including individuals, whose actions further a boycott of Israel or of Israeli settlement products called for by an international governmental organization. The bill would even criminalize the requesting or furnishing of information about such a boycott.

The bill would also deny government loans through the Export-Import Bank to firms that refuse to do business with corporations based in or operating out of Israeli settlements in occupied territory, which are illegal under international law.

Not only does the bill infringe on the First Amendment right to promote boycott, divestment and sanctions, but it also seeks to legitimize Israel’s settlements in the occupied West Bank and Golan Heights.

For decades, the US has refused to recognize the legitimacy of these settlements as part of Israel’s territory.

Gillibrand’s bold decision to withdraw her sponsorship of the Israel Anti-Boycott Act could signal its death knell, at least in its current form. However, with 46 senators and 249 representatives still supporting this unconstitutional bill, its passage remains a threat.

Josh Ruebner is Policy Director of the US Campaign for Palestinian Rights and author of Shattered Hopes: Obama’s Failure to Broker Israeli-Palestinian Peace. His forthcoming book is tentatively entitled Israel: Democracy or Apartheid State? He is a former Analyst in Middle East Affairs at Congressional Research Service.