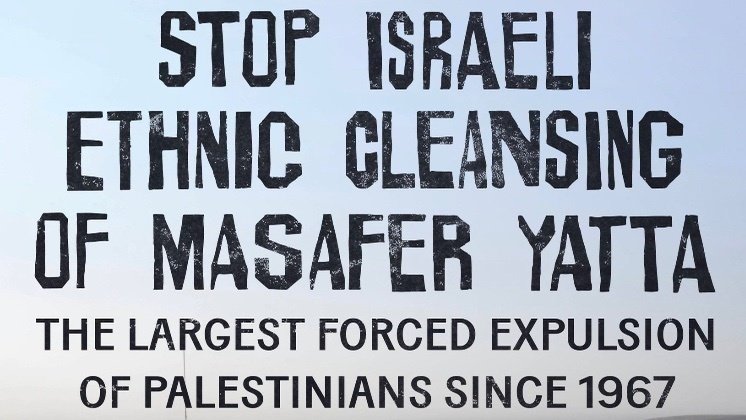 Update: Israel’s High Court of Justice dismissed all the petitions against the forcible transfer of up to 1,200 Palestinians in a large part of Masafer Yatta that Israel has declared a closed military zone.

Masafer Yatta is an area in the South Hebron Hills of the West Bank, which is home to twelve Palestinian villages totaling about 1,300 residents. The area is spread out over about 35,000 dunam of land, where agricultural communities have lived for generations.
In opposition to international law, which prohibits the expulsion of a population from its land and the use of occupied land for military training, in the early 1980s, the Israeli army declared the area Firing Zone 918, in order to dispossess Palestinians from their homes and strengthen Israeli settlements in the area.

Since this declaration, residents have lived under the daily threat of demolitions, evictions, and dispossession. Families in Masafer Yatta are denied access to their land, roads, sources of water, schools, medical services, and hospitals. This is in addition to nearly daily violence from settlers in the region.

The legal outcome for the area remains a question, as residents await a court ruling which will determine their futures. On March 15, 2022, the Israeli Supreme Court held a hearing to discuss the fate of the communities of Masafer Yatta. In the coming months, the court is likely to make a final decision in the case and determine whether hundreds of families will be forcibly expelled from their lands and homes. If the Supreme Court decides to permit the expulsion of residents, it will be one of the largest expulsions carried out by the State of Israel in recent decades, an alarming precedent that could lead to further expulsions across the West Bank, and a further escalation of Israel’s policies of annexation and Apartheid.

We must not stand by quietly as Israel evicts entire communities. We cannot allow Apartheid to go unchallenged.

Please join our Facebook group to receive updates on the situation.