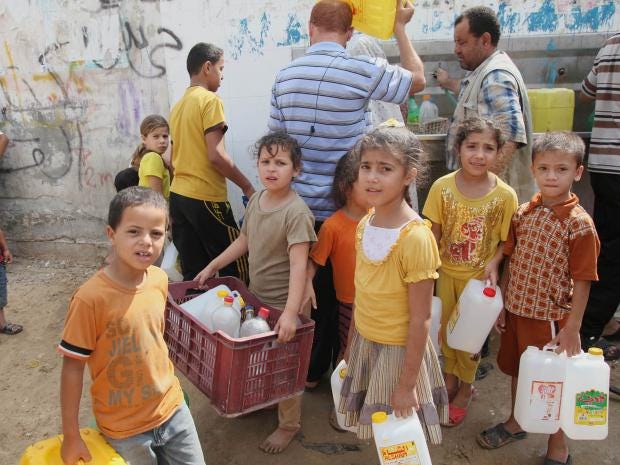 Israel has cut off the water supply to large areas of the West Bank, Palestinian authorities have claimed.

Tens of thousands of Palestinians have reportedly been left without access to safe drinking water during the Islamic holy month of Ramadan, a period of fasting, at a time when temperatures can exceed 35C.

The northern city of Jenin, which has a population of more than 40,000, said its water supplies had been cut in half by Mekorot, Israel‘s national water company. Jenin is home to a refugee camp, established in 1953, which contains 16,000 registered refugees.

Ayman Rabi, the executive director of the Palestinian Hydrology Group, told Al Jazeera that in some areas people had not received water for more than 40 days.

He said: “People are relying on purchasing water from water trucks or finding it from alternative sources such as springs and other filling points in their vicinity.

“Families are having to live on two, three or 10 litres per capita per day.”

A spokesperson for the Israeli government told The Indepedent there is “no truth” in the claims, and said the shortages were down to faulty water lines.

They said: “Several hours ago, COGAT’s Civil Administration team have repaired a burst pipe line, which disrupted the water supply to the villages of Marda, Biddya, Jamma’in, Salfit and Tapuach. The water flow has been regulated and is currently up and running.

“Any effort to connect the disruptions with terror is mistaken and misleading.

“Given the failure to develop infrastructures as a result of the unwillingness on behalf of the Palestinians to convene the Joint Water Committee (JWC), there are problems in the water supply.”

He told The Independent: “Israel already allows Palestinians access to only a fraction of the shared water resources in the occupied West Bank, with unlawful Israeli settlements getting almost unlimited water supplies which enable settlers to maintain lush gardens and even fill up numerous private swimming pools.

“Water is a basic need and a right. Mekorot should restore any water supplies to Palestinians it has cut off and the Israel authorities should end their discriminatory water policies, lifting all arbitrary restrictions it currently imposes on Palestinians’ access to this vital resource.”

The municipality of Jenin, several villages in Nablus and the city of Salfit and its surrounding villages claimed to have suffered cuts to their water supply.

Almost 200,000 Palestinians in the West Bank do not have access to running water, and require permission before collecting it themselves, according to a report by Amnesty International.

Since 1967, Israel has limited the water available to Palestinians in the West Bank and the Gaza Strip since its forces occupied the territories.