Palestinians call for a boycott of Israeli diamonds

Over 50 Palestinian organisations, representing a cross-section of Palestinian civil society, including women’s groups and trade unions, and international organisations in solidarity with the Palestinian struggle for equality, justice and an end to the Israeli occupation of Palestine, have issued an appeal to women and men of conscience and jewellers worldwide to reject diamonds processed in Israel.

1. Jewellers worldwide to immediately end the trade in diamonds processed in Israel, and

2. women and men of conscience the world over to reject diamonds from Israel which fund a military regime that murders, maims and terrorises innocent men, women and children with impunity.

Samir Abed-Rabbo, a coordinator of the campaign for a global rejection of Israeli diamonds said: “Revenue from Israel’s diamond industry is a major source of funding for the Israeli military which stands accused of war crimes by the UN Human Rights Council, Amnesty International and Human Rights Watch. Diamonds processed in Israel evade the human rights strictures of the Kimberley Process Certification Scheme which only bans ‘conflict diamonds’ or rough diamonds used by rebel groups to finance conflicts against legitimate governments.”

Pointing out the repeated refusal of the Kimberley Process to ban all blood diamonds he said: “The failure of the Kimberley Process to broaden the definition of a “conflict diamond” and ban polished diamonds that fund war crimes means that diamond purchasers are being sold blood diamonds, which are falsely labelled conflict-free by jewellers, including most, if not all, of the world’s most iconic jewellery establishments.”

Decrying the lack of security for Palestinians he continued: “International governments, the US and EU in particular, have failed to protect Palestinians from Israel’s diamond-funded military which last November killed 170 Palestinians, mainly civilians, including 33 children and in the last four weeks shot and killed six unarmed Palestinians. He said: “Diamonds are Israel’s most important manufacturing export commodity; accounting for 30% of Israel’s manufacturing exports. Without revenue from the diamond industry Israel could not afford the financial burden of the illegal occupation, construction of Jewish colonies on Palestinian lands and the brutal subjugation of the Palestinian people. ”

He concluded by calling on diamond-purchasers to: “be wary of claims by jewellers that “ethically sourced” or “responsibly sourced” diamonds are conflict-free, as the diamonds may still be blood diamonds if they were cut and polished in Israel where diamond-revenue funds a regime guilty of war crimes. Consumers should demand to know where a diamond was cut and polished as well as where it was sourced.” They need to be aware that when they buy a diamond processed in Israel it is tarnished with the blood of innocent Palestinian men, women and children. 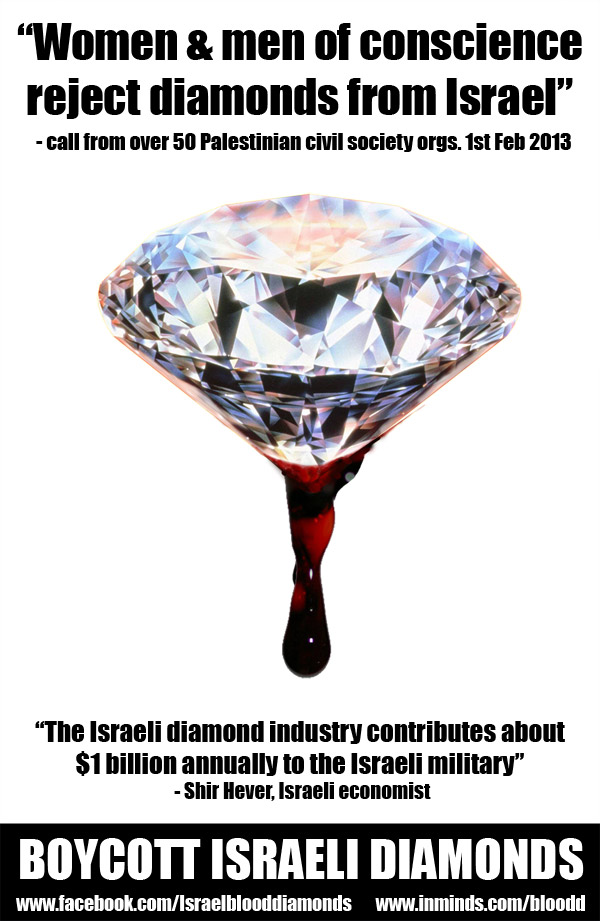 This call is endorsed by the following Palestinian and International organisations:

1. – According to Israeli political economist, Shir Hever, “Every time somebody buys a diamond that was exported from Israel some of that money ends up in the Israeli military, so the financial connection is quite clear. Overall the Israeli diamond industry contributes about $1 billion annually to the Israeli military and security industries.” https://www.youtube.com/watch?v=Q76ktVtvgVg

3. – Israel is one of the world’s leading diamond exporters, with exports valued at $22 billion in 2011 accounting for 30% of Israel’s exports. http://www.israelidiamond.co.il/english/news.aspx?boneid=401

5. – “The Mission finds that the conduct of the Israeli armed forces constitutes grave breaches of the Fourth Geneva Convention in respect of wilful killings and wilfully causing great suffering to protected persons and, as such, give rise to individual criminal responsibility. It also finds that the direct targeting and arbitrary killing of Palestinian civilians is a violation of the right to life.” UN Human Rights Council Report of the Fact-Finding Mission of the Gaza Conflict – http://www2.ohchr.org/english/bodies/hrcouncil/docs/12session/A-HRC-12-48.pdf

7. – November 2011 – Kimberley Process Civil Society Coalition, Brussels Communiqué calling of the inclusion of the cutting and polishing industry in the Kimberley Process http://www.pacweb.org/Documents/Press_releases/2011/KP_CSC_Brussels_Communique_Dec2011-Engl.pdf

8. – Human Rights Watch – Israel/Gaza: Unlawful Israeli Attacks on Palestinian Media
“Official statements that reflect the military having adopted an unlawful basis for attacks are evidence of war crimes because they show intent.” http://www.hrw.org/news/2012/12/20/israelgaza-unlawful-israeli-attacks-palestinian-media

9. – Global Witness leaves Kimberley Process, calls for diamond trade to be held accountable – “Most consumers still cannot be sure where their diamonds come from, nor whether they are financing armed violence or abusive regimes.” http://www.globalwitness.org/library/global-witness-leaves-kimberley-process-calls-diamond-trade-be-held-accountable