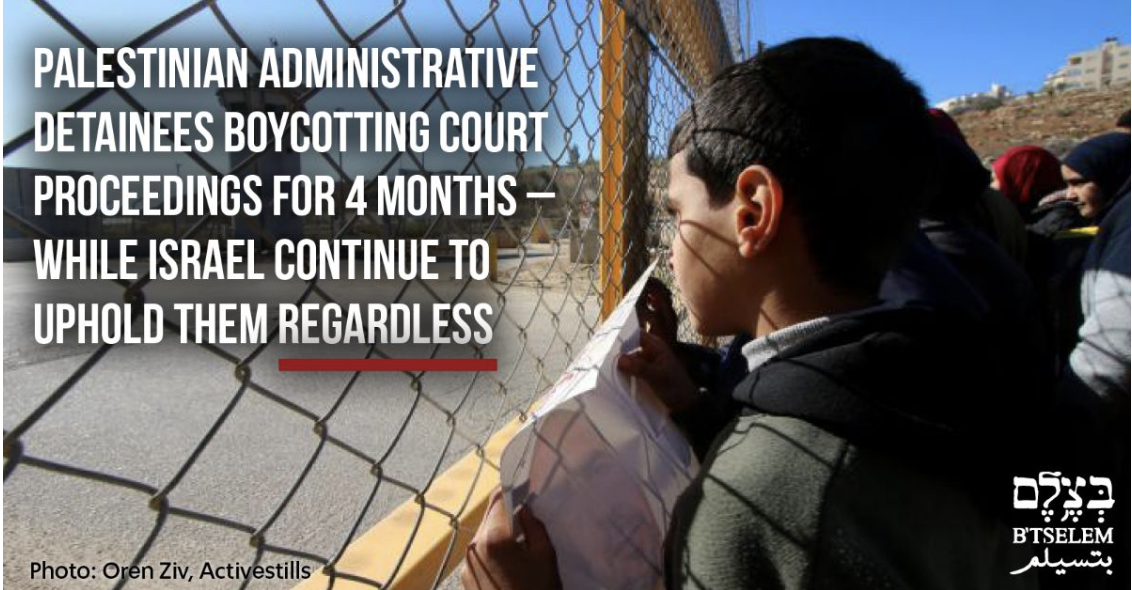 It’s a show the Israeli regime has been staging for years, by now casting thousands of Palestinians in it against their will. Week after week, month after month, administrative detainees are led handcuffed into courtrooms and hear what military prosecutors and judges have to say about them – and especially, what they do not say.

Act I: The prosecutor, a uniformed soldier, sternly proclaims that “the detainee is a threat to area security”. The judge, also a uniformed soldier, nods in assent. The defense counsel asks – why? Where is the evidence? Why not indict him? The prosecutor replies that all the answers are in the classified material the Israel Security Agency (ISA) submitted to the court. The judge nods.

Act III (a few months later): The detainee has served the time stipulated in the order and is preparing to go home. Just then, the guard hands him another detention order. The show begins again: handcuffs, a court hearing, classified material, a nod from the judge, and back to prison. Still without knowing why, or until when.

And so it goes. One detention follows another, orders are issued and renewed, and the judge approves them based on classified material. Time and time again.

Then, the detainees decided to quit the show. Since the beginning of 2022, Palestinian administrative detainees have boycotted the court hearings in their cases. After all, the show was never meant for their benefit, it was only meant to legitimize the detentions and deflect criticism. See, it’s not only the regional military commander who signed the order, but an actual judge!

And then it became apparent that despite appearances, the detainees do not play the lead role or even a supporting one in their own hearings. The Israeli regime does not need them to keep the show running. They are silent extras. For four months now, the show has gone on as usual, minus the detainees and their lawyers. The military prosecutor makes his statements, the judge nods and approves the order.

Administrative detention is a cruel, draconian measure. Detainees suffer not only incarceration in rough conditions, cut off from their family, friends and daily life, but also unbearable uncertainty regarding why they are there and for how long. Yet Israel uses this measure extensively against Palestinians, with the ongoing approval of legal advisors, military judges, and the Supreme Court.

All these seals of approval do not render Israel’s use of administrative detention lawful or just. As is the case in a myriad of issues concerning Israel’s regime of Jewish supremacy over Palestinians, here too, the Israeli legal system does not serve justice nor seeks to do so. It seeks only to represent the interests of the apartheid regime and to perpetuate it in the entire area between the Jordan River and the Mediterranean Sea.