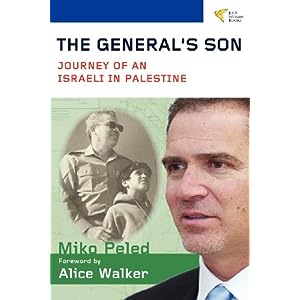 Miko Peled, activist and author of The General’s Son: Journey of an Israeli in Palestine

In 1997 a tragedy struck the family of Israeli-American Miko Peled: his beloved niece Smadar was killed by a suicide bomber in Jerusalem.

That tragedy propelled Peled onto a journey of discovery. It pushed him to re-examine many of the beliefs he had grown up with — as the son and grandson of leading figures in Israel’s political-military elite — and transformed him into a courageous and visionary activist in the struggle for human rights and a hopeful, lasting peace between Israelis and Palestinians.

“Miko Peled is a peace activist who dares to say in public what others still choose to deny. He has credibility, so when he debunks myths that Jews around the world hold with blind loyalty, people listen. ”

The event is co-sponsored by A. E. Havens Center, American Jews for a Just Peace-Madison, Madison-Rafah Sister City Project, Playgrounds for Palestine-Madison, Rainbow Bookstore Collective, and Students for Justice in Palestine-Madison. A book signing will follow the talk. The event is free and open to the public.

Read more about The General’s Son in a review by Steve Kowit.

You can also hear Miko on