One Palestinian woman was killed in an Israeli bombing that targeted her home in the Gaza Strip in the early hours of Tuesday, the spokesman of the Gaza health ministry told Al-Jazeera in an interview.

According to Ashraf Qedra, the health ministry spokesman, the total deaths resulting from the Israeli raids on Gaza since Monday have reached 22, including nine children and the woman who was killed in an attack in the early hours of Tuesday on her residential home in Al Shati refugee camp in the northern Gaza Strip. Her children have been wounded in the attack, but their condition is stable, he explained.

He added that 106 have been wounded in the air strikes, some of them in critical condition.

Meanwhile, the military wing of Hamas movement, the de facto ruler of Gaza, said it will carry out intensive rocket attacks on Ashkelon, located 13 km north of Gaza, in retaliation for the night raid that killed the Palestinian woman.

The Israeli attacks on Al-Aqsa Mosque and Gaza have triggered various international and regional criticism and calls for calm.

The international community, including leaders in the US and UK, have been largely silent over Israel’s air strikes on the Gaza Strip and the storming of Al-Aqsa, instead focusing condemnation against Hamas’ rockets and calling for calm “on both sides”.

US Secretary of State Antony Blinken on Monday said the rocket attacks from Gaza against Israel should stop “immediately,” and he urged all sides to take steps to reduce tensions.

“We’re very focused on the situation in Israel, West Bank, Gaza, very deeply concerned about the rocket attacks that we’re seeing now, that they need to stop, they need to stop immediately,” Blinken said ahead of a meeting with Jordanian Foreign Minister Ayman Safadi.

US Department of State spokesperson Ned Price said the Biden Administration is ‘concerned’ about the escalating violence at Al-Aqsa Mosque and in Gaza and urges ‘calm’ from both sides.

US House Representative Ilhan Omar, however, quickly labelled Israel’s strikes “an act of terrorism”, saying it would be “unconscionable to not condemn” them.

UK Foreign Secretary Dominic Raab said on Monday that the United Kingdom condemned the firing of rockets at Jerusalem and locations within Israel.

“The ongoing violence in Jerusalem and Gaza must stop. We need an immediate de-escalation on all sides, and an end to targeting of civilian populations”, Raab said on Twitter.

Saudi Arabia condemned the storming of Al-Aqsa mosque in a Twitter statement.

“We express our condemnation in the strongest terms for the blatant attacks carried out by the Israeli occupation forces, against the sanctity of the Al-Aqsa Mosque, and the safety and security of worshipers,” the Ministry of Foreign Affairs said in a statement.

It urged the international community to hold Israel accountable for its violations of Palestinian rights, and expressed solidarity with Palestinians.

Egypt’s Ministry of Foreign Affairs issued a statement expressing its condemnation, “in the strongest terms”, of the Israeli forces’ repeated storming of Al-Aqsa Mosque compound and the assault on Palestinian worshipers.

The statement urged Israel to “assume its responsibility regarding these rapid and dangerous developments,” which could lead to further tension and escalation.

Meanwhile, the Grand Imam of Al-Azhar Dr. Ahmed Al-Tayeb condemned the world’s “shameful silence towards the brutal Zionist terrorism and its shameful violations of the right of Al-Aqsa Mosque, our brothers and our sanctities in Arab Palestine.”

In Turkey, thousands took part in demonstrations in Istanbul and Ankara in defiance of a Covid curfew to protest against Israel’s raids on Al-Aqsa Mosque and deadly airstrikes in Gaza.

WATCH: Thousands flood the streets in Istanbul and Ankara in defiance of a Covid curfew to protest against Israel’s raids on Al-Aqsa Mosque and deadly airstrikes in Gaza pic.twitter.com/184l1Pip6C

President Recep Tayyib Erdogan, according to a statement from his office, told King Abdullah of Jordan that the “inhumane” attacks against Palestinians were aimed at all Muslims, adding that Turkey and Jordan needed to work together to stop them.

Thousands of Jordanians protested near Israel’s embassy in Amman on Monday, calling on their government to cancel its peace treaty with Israel in the face of attacks on Jerusalem’s al Aqsa mosque and Gaza.

Riot police blocked roads leading to the fortified embassy complex to keep back demonstrators who gathered around the Kaloti mosque in the capital near the Israeli mission.

Jordan, which established diplomatic relations with Israel in 1994, summoned the Israeli charge d’affaires in Amman on Sunday to voice the kingdom’s condemnation over Israeli “attacks on worshippers” around the al-Aqsa compound.

Javad Zarif, Iran’s foreign minister, condemned the storming of Al-Aqsa Mosque in a statement on Twitter.

“It wasn’t enough for the Israeli regime to steal people’s land & homes; Create an Apartheid regime; refuse to vaccinate civilians under illegal occupation,” he said.

“It had to shoot innocent worshippers inside Islam’s 3rd Holiest Mosque upon Islam’s Holiest Eid,” he added.

The Palestinian Red Crescent said early on Tuesday that its emergency teams have so far dealt with a total of 714 casualties in occupied Palestinian territories. In occupied East Jerusalem, the organisation said it treated 520 cases of wounded Palestinians.

Meanwhile, the organisation said that Israeli forces targeted its medical personnel and ambulances in the occupied Palestinian territories, including East Jerusalem.

According to a press release, one of the Red Crescent ambulances at the Hawara checkpoint in Nablus came under fire, hitting the windshield, in addition to targeting another ambulance with teargas and its side window was shattered in East Jerusalem.

The organisation reported another attack by Israeli forces on an ambulance volunteer in Bab al-Amoud in East Jerusalem, which resulted in a direct wound to him in the stomach.

A Palestinian man was killed in the city of Lod after he was shot dead late on Monday evening as protests continued inside Israel in solidarity with Al-Aqsa and Gaza against Israeli attacks.

In footage widely shared online, the man was seen laying on the ground with many people crowded around him and calling for medical attention.

The Palestinian news website Arab28 cited local sources as saying the protester was shot dead by an Israeli settler, while the Israeli newspaper Haaretz said the cause of death was not yet confirmed. Israeli police confirmed the fatality without further explanation. 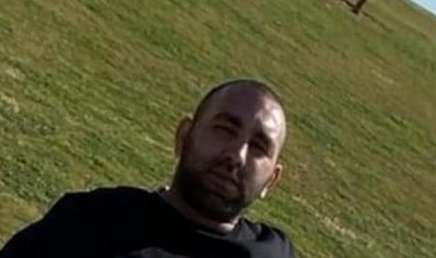 Moussa Hassona, a Palestinian from the Israeli city of Lod, was shot dead on Monday during protests against the storming of Aqsa Mosque (Arab48.com)

Arab 48 website identified the victim as Moussa Hassona. It cited a member of the Popular Committee in Lod, Tayseer Shaban, as saying that Israeli settlers fired indiscriminately on crowds of Palestinian demonstrators. He said the protesters “erupted peacefully in support of Al-Aqsa, and were surprised by the bullets of the occupation and its settlers.

Arabs in Israel held massive demonstrations in support of Jerusalem and the Al-Aqsa Mosque on Monday, while Israeli police arrested dozens of protesters, and wounded many others as they tried to disperse the protests with rubber-coated metal bullets and tear gas canisters.

The mass protests erupted in Nazareth, Shfaram, Umm al-Fahm, Ain Mahal, Tamra, Baqa al-Gharbia, Jaffa, Lod, Ramla and Jaljuliya to protest the storming of the Al-Aqsa Mosque and the attack on worshipers and protesters in the Sheikh Jarrah neighborhood and Bab al-Amud Square.

At least 46 Palestinians have so far been arrested in the protests, according to Israeli police.

Palestinians have been protesting over the past few days against the forced eviction of a number of  Palestinian families in the occupied East Jerusalem neighbourhood of Sheikh Jarrah.

On 2 May, Israel’s Supreme Court ordered that 40 residents of Sheikh Jarrah, including 10 children, be removed from their homes, which would subsequently be given to Israeli settlers. The order sparked massive protests in East Jerusalem, which have spread across cities in Israel and the occupied Palestinian territories.

US 'concerned' about escalation in Jerusalem and Gaza
3 hours ago

US Department of State spokesperson Ned Price says the Biden Administration is ‘concerned’ about the escalating violence at Al-Aqsa Mosque and in Gaza and urges ‘calm’ from both sides.

WATCH: US Department of State spokesperson Ned Price says the Biden Administration is ‘concerned’ about the escalating violence at #AlAqsaMosque and in #Gaza and urges ‘calm’ from both sides#Israel #Palestine pic.twitter.com/EWKTDN0wLL

A frenetic day has been bookended by Israeli raids in al-Aqsa mosque that injured hundreds of worshippers.

Fear of the notorious Jerusalem Day march further inflaming tensions in Jerusalem by going through the Old City’s Muslim quarter were avoided when authorities re-routed the nationalist march.

But days of violence in Jerusalem have shifted to Gaza where Israel has announced a new military operation and air strikes that have so far killed 20 people, including nine children. Hamas earlier demanded Israel withdraw from al-Aqsa by late afternoon and, when it did not, fired a barrage of rockets towards Israeli towns and Jerusalem. 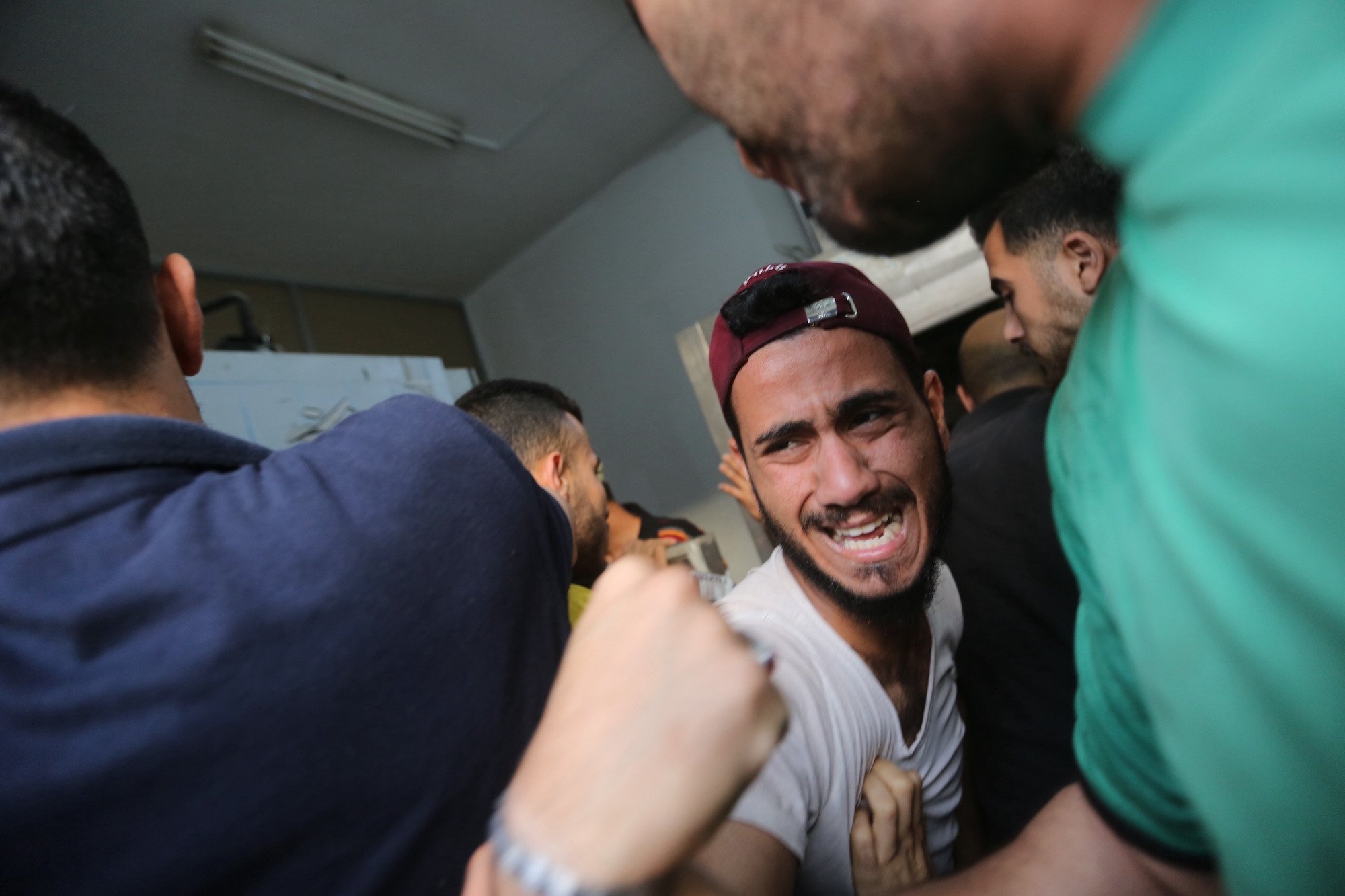 A member of the al-Masri family, two children of which were killed by Israeli air strikes on Monday, at the morgue where the bodies of the youngsters were taken (Mohammed al-Hajjar/MEE)