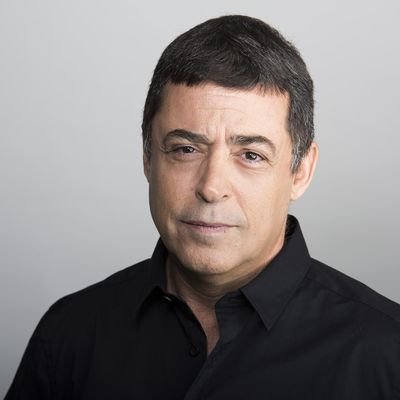 Prominent Israeli journalist Ben Caspit caused international furor last week, when he wrote in his Maariv article that “in the case of the girls, we should exact a price at some other opportunity, in the dark, without witnesses and cameras”.

Caspit has certainly felt the heat in response to his insidious suggestions, and probably began fearing not only for his reputation, but possibly for his job, which besides Maariv also includes the respected Al-Monitor. Israeli activist Ofer Neiman tweeted: “He can’t have it both ways – writing for a liberal peace-oriented outlet and inciting rape/murder/violence.”

Caspit’s article was in Hebrew, but now he is trying to backpedal and ‘clarify’ in English – in a Jerusalem Post article from yesterday.

Caspit titles his piece “Fighting a shaming campaign with the truth”, framing himself as a victim who has simply been misunderstood. He describes his ‘ordeal’:

“Within hours you discover that you’ve turned into Public Enemy No. 1, a modern day pariah; a man who calls for the rape of young girls and destruction of families; a contemporary Nazi. A rare combination of circumstances, a phrase taken out of context, an inaccurate translation and a great deal of evil intention have planted in your keyboard things you never said, and in your brain, things you never thought. All that is left it to chase after the eternal wind in the cyber willows.”

I am proud to say I am one of those who have publicly and critically referred to his first article, though not the first. The critical and most egregious sentence mentioned above had appeared in mainstream media a day later – for example AP and CBS. The translation was accurate and furthermore, in my article, I provided a greater context than was available otherwise, precisely in order to relate to Caspit’s greater message of incitement, and how that phrase played into it.

The other quote, which Caspit does not refer to at all in his ‘clarification’, is this, as I had written:

“There is no stomach which does not turn when witnessing this clip”, Caspit says, referring to Zionist stomachs, that is. “I, for example, if I were to encounter that situation, I would have long ago been in detention until end of procedures”. In other words, Caspit is saying he would run amok on the girls to a degree that would get him arrested. That’s what he’s indirectly suggesting would be ‘normal’, because he would do it…

You see, Caspit’s unspecified suggestion for a “price” to be “exacted”, is conditioned by his incitement mentioned here. We don’t know the details of the actions which Caspit imagines would get him arrested. And do we even want to know them? If Caspit suggests he would do those unspeakable actions in the daytime, even if there were cameras filming – what are we to think of the things he, or the others influenced by his suggestions, might do in the dark?

Caspit seeks to portray himself as a ‘man of peace’, who couldn’t possibly suggest that such insidious things be done to Palestinian girls:

“No one bothers to ask him/herself whether or not you’ve devoted your entire career to the peace cause, supported and continue to support the peace agreements and proposals, support the establishment of a Palestinian state alongside Israel, see the settlements an enterprise that has caused more harm than good and is considered in Netanyahu’s office as one of the right’s greatest media enemies”, he bemoans.

In other words, Caspit is trying to point out that all these “leftist” points should count, and that if they were counted, they would ostensibly outweigh any ‘misunderstanding’ of his text. Yet as I have pointed out earlier this month, an Israeli ‘leftist’ general, interviewed extensively on the same Maariv, was calling for ‘tearing the Palestinians apart’ and ‘tossing them across the Jordan’. Being an Israeli leftist proves nothing of the kind that Caspit seeks to prove.

Caspit reduces the whole filmed episode of the soldiers occupying the Tamimi lawn to a “meeting”:

“What’s this all about?”, he asks. “A meeting between two IDF soldiers and the Tamimi family from the village of Nabi Saleh that was leaked to the Israeli media last Monday”, he answers himself.

One is almost persuaded to think that the Tamimis sat at their kitchen table with two IDF soldiers, perhaps discussing politics and daily trivia. But no, this was not it at all. As Ahed’s father, Bassem, wrote in his excellent piece in Newsweek two days ago,

“Less than half an hour earlier, a soldier shot Ahed’s 14-year-old cousin in the face at close distance with a rubber coated steel bullet, causing severe injuries and leaving him in a coma. Then, two soldiers had jumped the wall of our backyard and forced their way on to our property when Ahed confronted them in an effort to make them leave.”

For Caspit, the video of Ahed slapping the soldier was infuriating: “The video made every Israeli’s blood boil, regardless of his/her political inclinations”, he writes. But this is not true. I am an Israeli, and it was not the video itself that caused my blood to boil. Rather, it was the madness and incitement sweeping across Israeli society, leadership and media – including, in particular, Caspit’s vile incitement.

Caspit is arguably more dangerous than the rightists who regularly bark racist statements against Palestinians (like for example lawmaker Oren Hazan, Likud, who yesterday got on an ICRC bus of Palestinian family relatives from Gaza traveling to an Israeli prison, calling their children “dogs”). It’s precisely because Caspit wears the cloak of a respectable, leftist journalist that such suggestions coming from him can carry weight also for those ‘peaceniks’ (whose blood nonetheless boils when 16-year-old girls provoke them…)

Caspit tries to argue that actually, he wasn’t inciting at all, quite the opposite, as it were. He claims that the essence of his article was hailing ‘restraint’:

‘In the article itself, I praised the IDF soldiers, for their “superhuman restraint” against Palestinian provocation’, he writes.

There is of course no provocation whatsoever in all this, from the soldiers, in Caspit’s rendering (let us also put aside the seldom mentioned slap from the Israeli soldier which hit Ahed 5 seconds before she slapped him). Anyway, in Caspit’s original Maariv article, he wasn’t actually hailing their restraint for itself, but rather for its PR value:

“Sometimes also restraint is power, and in the case before us, the combatants are worthy of a medal of honor, not reprimand. To keep one’s restraint in this impossible situation is far more difficult than applying force, especially when the bitter enemy in front of you is three girls who do everything to get beaten up, knowing fully well that any laying of a hand by armed combatants upon supposedly innocent girls will serve as a deadly propaganda weapon in the endless war fought for hearts on social media”, he wrote last week (as I had also quoted in my earlier piece).

Caspit is bewildered as to how people (of the “social media masses”) could possibly have misunderstood him so badly:

“Where, then, did the social media masses find the story, according to which I had proposed that the IDF should rape Ahed Tamimi under the cover of darkness? Where did the Satanic plan – accredited to me – to make Palestinian families disappear or to carry terrible crimes on them in the dark come from?”, he asks.

Well, I for one did not say that Caspit necessarily suggested that the girls would be raped. But his suggestion, with its insidious language (paired with the above mentioned additional incitement), certainly left a huge open space for creeps and their wild imagination. On this I wrote:

These are not just words. It’s like when last year, an Israeli former chief educator suggested in a Sheldon Adelson paper that Sweden’s Foreign Minister Margot Wallström might get the ‘Bernadotte treatment’ (assassination), for daring to suggest that Israel might be applying a policy of extrajudicial assassinations. The author, Zvi Zameret, later said that he didn’t actually suggest her assassination. Just like Caspit was not actually saying Ahed Tamimi should be beaten or raped. The details of the crime can be left to the wild imagination of those perpetrating it, “in the dark, without witnesses and cameras”.

Caspit suggests that all this “misunderstanding” came exclusively from non-Israelis:

“No one in Israel understood my article in this light because it was read in the right context – regarding the argument over the timing of Ahed Tamimi’s arrest”, he writes.

“Did the hand of Ben Caspit tremble when he wrote these lines? In polished, clerk-like language, and without saying anything explicitly, the prominent journalist Ben Caspit managed to write a sentence which in its entirety is a threat of chilling violence against the young Tamimi women.”

Litman additionally quotes Caspit who wrote that “the IDF has sufficient capabilities, creativity and means to create such inputs, without paying an exorbitant public price”, and Litman then asks:

“Did the editor hesitate when they read this sentence, the thickness of the words “girls”, “in the dark, without witness and cameras” and “creativity”, and feel totally comfortable with it? How is it possible that no one stopped for a moment to digest these words, that no one’s stomach turned?”, Litman writes (echoing Caspit who wrote that “there is no stomach which does not turn when witnessing this clip”).

These are Israeli people, folks. We’re not that stupid. And Caspit, in his desperate attempt to backpedal, is providing an even more pathetic article, which suggests that its just the goyim who didn’t understand Israeli jargon. So take it from us, the ‘other’ Israelis – you didn’t really misunderstand him. He is now trying to convince us that his whole suggestion was just about timing – arrest them in the night, rather than in the day, as it were (and remember, no cameras, and be creative). Nothing to look at folks, move quietly on.

No, there’s a lot to look at here, and Caspit should be doing a major soul-searching, rather than investing time in such tiring self-apologia.

Towards the end of his Jerusalem Post article, Caspit shows his ‘reasonable’ and ‘merciful’ face concerning Ahed Tamimi:

“As this article is being written, it has been announced that Ahad Tamimi’s custody has been extended by four days. Just as I had originally thought that it was best to arrest her quietly, I now believe that it is unnecessary to keep her for so long in custody.”

So now Caspit is complaining that Ahed is being treated too harshly! Crocodile tears? The system is simply being ‘creative’ – isn’t that what Caspit was suggesting? Ahed Tamimi has been carried around to various prison facilities, put in cold cells, and not even allowed a change of clothes at least in her first 6 days of detention. Israeli-Palestinian lawmaker Ahmad Tibi tweeted yesterday (Hebrew):

‘Ahed Tamimi aged 16 is detained for 6 days and despite the decision of the court President to provide her clothes, this has not been done. “The system” is exacting revenge’.

That ‘revenge’ is the ‘price’ that the system is now ‘exacting’ upon Ahed Tamimi and her family. It is happening in the darkness of cold cells, where there are no cameras or witnesses. And Ben Caspit has been a part of the incitement leading to all this.