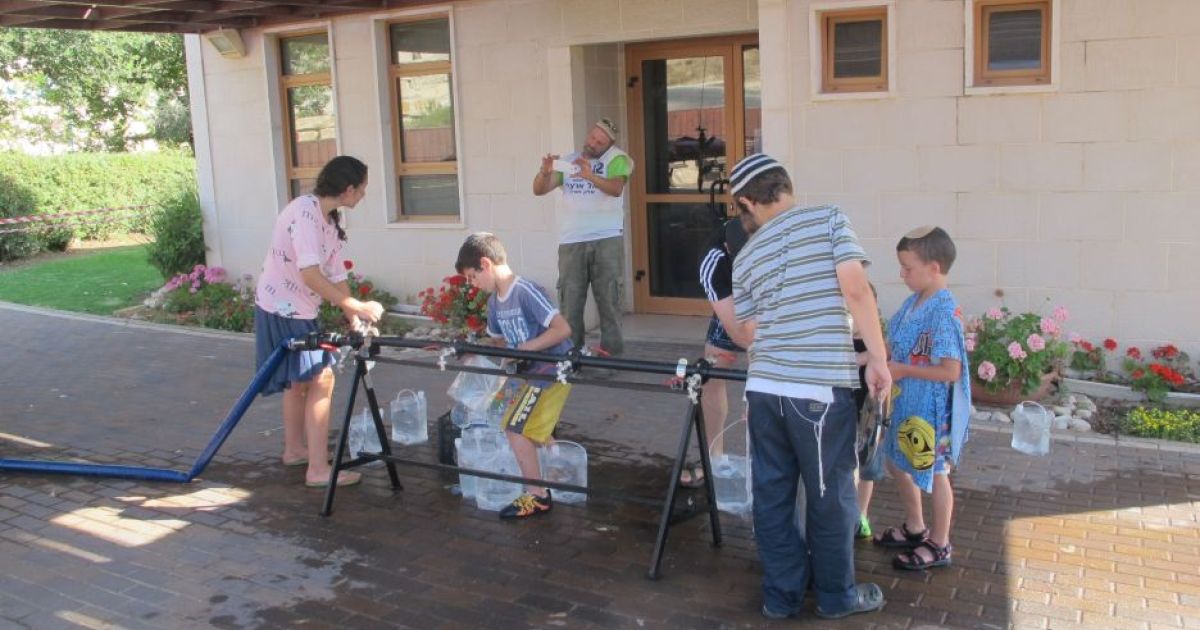 With Israel having cut the Palestinians’ water supply, I visited two settlements where the people are supposedly suffering too.

Thus tweeted MK Bezalel Smotrich (Habayit Hayehudi) on Friday: “No joke: We’ve gone back 100 years!” He reported on five stations for providing drinking water that were placed that morning in the settlement of Kedumim.

That day, the religious Zionist weekly Makor Rishon published an article titled “The water crisis in Judea and Samaria: In the settlement of Eli huge bags of drinking water were distributed to the residents.”

So I set out to witness this suffering at two settlements. I left before I saw the tweet by one Avraham Benyamin in response to Smotrich: “We’re waiting for a series of empathetic articles in Haaretz. We’ll continue to wait.”

Indeed, last week I started writing my annual series of articles on the systematic theft of water from the Palestinians. I was surprised not to find any newspaper reports about water problems in the settlements. There weren’t any on Army Radio and Israel Radio – notorious clandestine supporters of the BDS movement. But neither did I find any mention of it on websites linked to the settlement lobby.

After all, since the beginning of June, when the Mekorot national water company began cutting water supplies to the Palestinians in the Salfit and Nablus areas by some 30 to 50 percent, Israeli spokespeople have claimed there is a shortage in the settlements too. (Or in the unsanitized words of a Palestinian employee in the Civil Administration: They’re cutting back from the Arabs so there will be water for the settlers.)

Makor Rishon reporter Hodaya Karish Hazony wrote: “In the communities of Migdalim, Yitzhar, Elon Moreh, Tapuah, Givat Haroeh, Alonei Shiloh and others there have been water stoppages. ‘We’re between insanity and despair on this matter,’ said one resident.”

So I went to check the water shortage that’s driving the people from insanity to despair in Eli. I looked for people lining up for water. I didn’t find them. Then I drove from the center of the lush settlement to isolated Hill No. 9, the site of the Hayovel neighborhood mentioned in the article.

There I found two huge and swollen blue sacks from the Water Authority, with faucets attached to them. A sign requests that you “maintain order” while waiting and notes that “priority will be given to the elderly, the ill and children.”

At about 3 P.M. I didn’t see any elderly, ill people or children waiting next to the faucets. Nor did I see any ordinary adults. A few drops leaked from the faucets and wet the asphalt. People entered or left their cars. Artificial grass adorned areas near the neighborhood’s prefab homes.

Near the soldiers’ guard post, about 50 meters from one sack of water, there was an area of natural grass that was quite green. Next to it were a few tree saplings, and the soil around them was wet, with several puddles. A soldier said that over the week there had been several water stoppages, and he thought the sacks were brought on Thursday. The article said Wednesday.

In a small public building nearby, the bathroom was open and sparkling clean. The toilet flushed nicely, and refreshing water flowed from the sink’s faucet. A woman who got out of her car next to the sack of water said, hesitantly, “I’ve used it sometimes.” And why not more? “It’s unpleasant; the water is warm.”

Further down, in the center of Eli, I came across girls holding bags with towels and bathing suits. “Is the pool open? Where is it?” I asked.

Following their instructions I arrived at the Eli pool. Splashing sounds and the joyful shouts of swimmers could be heard from behind the fence. The lawns around the pool were natural and green. I wondered: Where’s the solidarity? Why don’t they bring water from the center of Eli to the neighborhood that’s suffering because of its altitude?

Makor Rishon quoted Meir Shilo, head of infrastructure for the Mateh Binyamin Regional Council: “The problem is overconsumption caused by the [settlers’] population increase and mainly, it seems, because of the consumption of water for agriculture.”

Dror Etkes, an independent researcher of the Israeli colonization policy, told Haaretz that in the settlement bloc surrounding Shiloh, “settlers are cultivating 2,746 dunams [679 acres; most of this is around Shiloh: 2,600 dunams]. Of this, 2,133 dunams are private Palestinian land.”

Meaning: In recent years, the settlers have discovered that piracy (as opposed to state theft) for agricultural purposes facilitates the grab of more Palestinian land than the construction of villas or prefab homes does.

The army, by preventing the lawful Palestinian owners from reaching their land, has made this piracy possible. And along with the private illegal agriculture comes the increase in water consumption at the expense of the Palestinians and their agriculture and drinking water.

From Eli I traveled west to the settlement of Kedumim, where the lush streets welcomed me. I looked for the water stations that Smotrich had tweeted about.

From my car windshield I saw a sign: “The swimming pool in Kedumim is open. Register now.” They probably forgot to take it down from last year.

In the Rashi neighborhood I arrived at a water-distribution station, under the awning of the Rashi religious study hall. Opposite stood a truck with a large water tank. Someone returned from it with a pail and headed for the prefab homes at the top of the hill.

“Yes, there are water stoppages,” he confirmed. “An opportunity to get a taste of the siege of Jerusalem,” he added, referring to the events of 1948.

And why not go down to fill up with water in Kedumim’s lower neighborhoods? “It’s more convenient this way, close to home,” he replied.

At the faucet children were filling various containers. The girl next to the red sack told the man who was taking her picture: “Make sure the bottle is seen in the photo.”