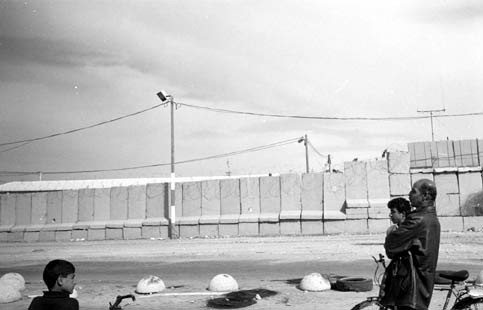 The entire border of Gaza is surrounded by heavily-patrolled walls and fences. A network of Israeli checkpoints tightly controls movement in and out of the Strip, and between population areas within the Strip. (Jamal Wilson)

Following the suicide bombing at Erez Crossing that left four Israeli soldiers dead and several Palestinian workers injured, Erez (at the north of the Gaza Strip), and Maabar (the other way in and out of the Gaza Strip, on the border of Egypt), have been under tight closure, with crowds of people waiting for days to be let through.

The Madison-Rafah Sister City Project has managed to get only one of three of their delegation to Rafah. The closure on Gaza has intensified with yet stronger measures. As of January 4, 2004, any internationals wishing to enter must have official Israeli permission.

Israeli permission requires an Israeli press pass, an official invitation from one of a short list of Israeli-accepted organizations, and a five-day background check by the Israeli authorities. Here are excerpts from a letter home from one of the delegation as they were attempting to enter. They are an excellent description of the great extremes Israel will go to keep out international eyes.

Excerpts of Monday’s letter from Jennifer, one of the delegation members

Thought you would appreciate knowing what is going on here. The situation is much worse than any of us anticipated. The blockade into Gaza is extreme. None of us can get in right now. I was at the Press House in West Jerusalem today and learned that before they will validate my press card I need a letter of “assignment” (in addition to the valid, wholly legitimate press card I have) from WORT-Radio and a message from the Israeli Consulate in Chicago identifying WORT-Radio as a “legitimate” media outlet. … [George is in a similar situation with the Madison Times.] Cisco did not get a press card so he’s out altogether in this respect.

Our next step after visiting the Press House this morning was to go to the American Consulate — literally a minute from our hotel here in East Jerusalem. We were all carefully searched going in, but were let in relatively easily compared to the line of Palestinians waiting outside in the rain (yes, it was pouring today) to try to get travel visas. Once in, we met with an American official who dismissed us rudely in less than two minutes when we stated our reason for being there (to get the US’ permission to go to Gaza).

We presented our letter from US Congresswoman Tammy Baldwin’s office to him to absolutely no avail: he didn’t even look at it. He pushed it back over to me and said, (I’m quoting very closely) “We have nothing to do with Rafah and nothing to do with Gaza. It is a dangerous place and you have no business going there. You can go to the embassy in Tel Aviv if you want to press this further but you’re wasting your time.” We each tried saying something further but were cut off and led out of the building. We are now considering phoning Baldwin’s office and seeing if they will put pressure on the embassy in Tel Aviv. I am convinced, however, that her endorsement makes no difference whatsoever.

Discouraged, we wandered over to the American Colony Hotel to get information on renting cell phones and finding a camera store (Cisco wanted to get a camera). We ended up in the bookshop there. The store clerk (a Canadian) spoke to us for some time about his experiences with Israeli bureaucracy and trying to get into Gaza. An associate of his was in the store at the time, a young man who had just recently been assigned to work in Gaza.

This man told us he’d [tried to get in] to Gaza twice now in the past two weeks and was still being rejected although he is from the World Bank and this is his formal job. The store clerk then said that since the 4th of January there have been new restrictions put into place for different categories of people. He wasn’t sure which restrictions applied to which people, but said that there is in general a five-day waiting period now even for people whose entry into Gaza has been approved by the Israeli authorities.

If this is true, it is possible — if all of the paperwork shows up in time — that I could get into Gaza on Saturday, i.e. the day before our departure back to the States.

You can probably by now tell what we are up against and how frustrated we all are. There are, however, a few glimmers of optimism in all this. [There are a couple of options left to explore].

In the meantime I have spoken multiple times to Ali Barhoum, Emad Sha’ath, and the mayor, Said Zoroub. All of them have been extremely kind,supportive, and have emphasized again and again how much they had wanted us to come, how important they consider our delegation and that they will continue to do what they can to help us out. …

The best thing to come of the entire day was when I spoke to Deputy Mayor, Emad Sha’ath, who was also very sorry about all we were facing (the Israeli authorities apparently let no one in the PA know anything about their latest regulations). Emad has a permit that allows him to go back and forth from Gaza to the West Bank relatively easily. He said that if nothing else, he could meet us in Ramallah on Thursday to discuss some of the many things Madison and Rafah might consider doing together.

Like the others, he expressed real dismay at our not being able to come in and said how much they had all been looking forward to our visit. They had many things planned for us including a conference to attend tomorrow that was added late to the schedule.

…we are making our back-up plans now — including a tour of the Wall with PENGON and visits to Nablus, Jenin, Ramallah, Hebron and elsewhere. Of course, Nablus [where Kelly B. is now — Barb] remains sealed off and we have been told we won’t get in. We’ll try nonetheless. Our hosts at the hotel are happy to have us staying here extra nights since business is so god-awful. More than half the hotels in East Jerusalem are simply closed down — this has been true for a long time now— and you can feel the oppressiveness of the dying economy in the air.

I am planning to visit Amira Hass on Thursday or Friday and George will be meeting Raja Shehadeh at some point. If you have other requests or suggestions let me know.

Meanwhile, our breakfast host charmed Cisco and me with stories of his time in Prison (he was just recently released), and how now his brother is in.

One has to wonder what on earth it will take to make people object to these outrages.

This will be a shorter message: I did go to the Erez crossing today (3 hours of traveling there and back) to be told that yes, in fact there is no way anyone can get in unless they have an Israeli approved press card. All our other efforts are completely in vain. There is a minimum 5 day waiting period (new regulations as of 1/4/04) for anyone connected to any international organization and no chance for anyone else).

I phoned Baldwin’s office last night & spoke to Andrea Bagley who faxed the US Embassy in Tel Aviv to complain of our treatment here at the American Consulate and ask that we please be allowed to proceed into Gaza. They’ve ignored her message, so far as we can tell, and it apparently won’t help us anyway.

The one glimmer this time is that I finally got hold of an incredibly nice person in the Press division of the US Embassy. …he agreed to fax a letter to the Israeli Press House here in Jerusalem saying that WORT is in fact legitimate. [God, it feels so nice to talk to someone human.]

He is allegedly going to do this now (this afternoon) and that means, if no other unexpected glitches occur, I will indeed have an Israeli approved press card by tomorrow morning. The soldiers at Erez told me today this was the only way I’d get in.

So, as things stand now, I may be the only one to get into Gaza. I don’t see any hope for Cisco, though George is still proceeding with the Madison Times (Jonathan Grammling has been terrific) so there is some chance he’ll get in on Thursday or Friday. Honestly, I think even two days would be worth it.

If none of us gets in, which of course is still very possible, we will (starting tomorrow) spend the remainder of our trip in the West Bank. There’s more bad news in Nablus and Qalqilya, where I’d go, and the Wall is now going up around Abu Dis here just outside East Jerusalem. So lots to see and explore. PENGON is giving tours of the Wall starting here and we’re all interested in going with them.

Laura Gordon is a 20-year-old American Jew who came to Israel in December 2002 with the Birthright Israel program and proceeded, three months later, to begin work with the International Solidarity Movement in Rafah.