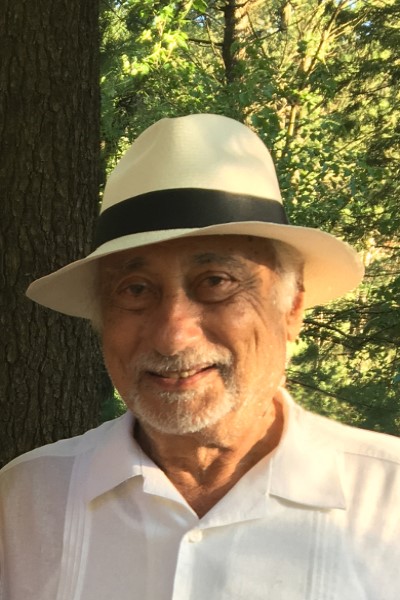 George Kamel Shalabi passed away January 31, 2020 from complications due to congestive heart failure. He was born at home on April 9, 1939 in Haifa, Palestine to Nahala and Kamel Shalabi. He was the oldest of four boys — a position of responsibility, respect and honor in Arab families. This helped form his personality and guided his interactions with people throughout his entire life.

In 1948, his family lived as refugees in one room of Carmelite monastery, on Mount Carmel, high above the city of Haifa. He was 9 years old during this period and remembers the time fondly because he didn’t have to go to school.

Much of George’s early education was at a school run by French monks, where all subjects were taught in French. He was fluent in several languages — Arabic, French, English and Hebrew.

Because of his fluent French, after high school, he landed a job working at the French Embassy in Haifa. He worked here for several years before meeting Bill Cabecca — a U.S. Naval attaché who would frequently visit the embassy.

George and Bill befriended each other and it gave George the opportunity to practice his English skills during their visits.

It was at Bill’s insistence that George applied for college scholarships in the United States and he eventually received an offer to attend the University of Wisconsin-LaCrosse.

He left Haifa in June of 1962 on a ship with a suitcase of clothes and the equivalent of a couple of hundred dollars in his pocket.

At the University of Wisconsin-LaCrosse, he began working on his chemistry degree. And at a party in 1964, he met Peggy Goltz, whom he would eventually marry on July 1, 1967.

After they graduated, they both found jobs in the Sauk-Prairie, Wisconsin area and moved there to settle and start a family.

George found work at the Badger Army Ammunition plant in 1967 and worked there in various environmental and chemical engineering capacities until he retired in 2000.

With a wide variety of interests and passions, George had a very active retirement. At the age of 65 he took up cycling and completed several long-distance bike tours. He also began to develop his skills as a woodcarver and was fond of carving walking sticks. He was part of an active hiking group and hiked all over Sauk County. He loved drinking tea, reading the newspaper and completing the crossword puzzle each day at his favorite cafe — the Blue Spoon in Prairie du Sac, Wisconsin.

He was also on the board of the St. Vincent de Paul Sauk Prairie and spent many hours volunteering at the store in Sauk City.  And he was a member of the Sauk Prairie Rotary Club for many years.

But his real life’s work was working for peace in the Middle East through his many talks (and Facebook posts) — both formal and informal — that he gave on the subject. While he lived most of his life in the United States, his true identity was that of a proud Palestinian.

For many years, George was on the board of the Pilgrims of Ibillin, the fundraising organization of the Mar Elias School in the Galilee region of Israel. The mission of the school is to create an environment where children of all religions in the area — Christian, Muslim, Jewish and Druze — went to school together from a very young age. The idea being, that you could not blindly dislike someone that you grew up with. This mission resonated closely with George’s view on the world — he just wanted everyone to get along. “We are all more alike than we are different,” he often said.

Through his work with the Pilgrims of Ibillin, he led several Holy Land tours, sharing his passion and knowledge of the area with many dozens of people through the years.

George was also very proud of his daughters Samia and Leslie and had a deep devotion to Peggy, his wife of 52 years.

George is survived by his wife Peggy, his daughters Leslie Shalabi (Mike Muench) of Dubuque, Iowa and Samia Shalabi (Jack Williams) of Madison, Wisconsin; his brothers Michael Shalabi (Jeanette), of Haifa, Israel; and Souhael Shalabi of Kingman, Arizona as well as many nieces and nephews, whom he loved dearly. He was preceded in death by his parents and his brother Fareed.

A memorial service is planned for Saturday, February 22 at The Freethinkers Hall in Sauk City, Wis. (307 Polk Street) from 2 to 6 pm. Friends are encouraged to share memories during a storytelling session (George LOVED telling stories) from 4 to 5 pm.

The family would like to sincerely thank his cardiologist Dr. Eltibi, and especially the nurses and nursing assistants on the cardiovascular unit of Mercy One Medical Center in Dubuque, Iowa.

Online condolences for George’s family may be left at www.tristatecremationcenter.com