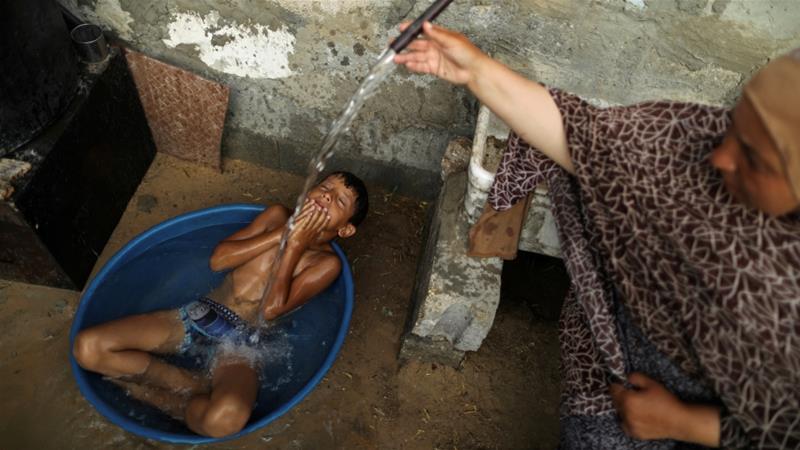 Before, the doctor says, he saw “one or two cases” of blue baby syndrome in five years. Now it’s the opposite – five cases in one year.

Asked if he has studies to back up his findings, he says: “We live in Gaza, in an emergency situation … We have time only to relieve the problem, not to research it.”

Yet Palestinian Ministry of Health figures support the doctor’s findings. They show a “doubling” of diarrheal disease, rising to epidemic levels, as well as spikes last summer in salmonella and even typhoid fever.

A Rand Corporation study has found that bad water is a leading cause of child mortality in Gaza.

“So much suffering,” says Dr Abu Samia. It is, he says, a matter of “life and death”.

Multiple factors are to blame for the uncoiling health crisis, but medical experts agree on one central culprit: Gaza’s scarce and contaminated drinking water, owing to Israel’s economic siege, its repeated bombing of water and sewage infrastructure and a collapsing aquifer of such poor quality that 97 percent of Gaza’s drinking-water wells are below minimal health standards for human consumption.

Dr Majdi Dhair, director of preventive medicine at the Palestinian Ministry of Health, reports a “huge increase” in waterborne disease, which he says a “directly related to drinking water” and to contamination from untreated sewage water flowing directly into the Mediterranean.

A visit to Gaza’s densely-packed Shati (or “Beach”) refugee camp helps explain why. There, 87,000 refugees and their families – expelled from their towns and villages during the creation of Israel in 1948 – are packed into half a square kilometre of cement-block structures along the Mediterranean.

“Water and electricity? Forget about it,” says Atef Nimnim, who lives with his mother, wife, and two younger generations – 19 Nimnims in all – in a small three-room dwelling in Shati.

The Gaza aquifer that sputters through their taps is far too salty, hardly anyone in Gaza drinks it any more. For drinking water, Atef’s 15-year-old son piles plastic jugs onto a wheelchair and rolls it to the mosque, where he fills the family’s containers, courtesy of Hamas.

Most families, even in the refugee camps, spend up to half their modest income on the desalinated water from Gaza’s unregulated wells. But even that sacrifice comes at a cost.

Palestinian Water Authority tests show that up to 70 percent of the desalinated water delivered by a small army of private trucks and stored in the camps’ rooftop tanks, is prone to faecal contamination.

Even microscopic amounts of E coli can bloom into a health crisis.

The reason for that, explains Gregor von Medeazza, UNICEF’s water and sanitation specialist for Gaza, is that the longer the E coli remain in the water, the more “they start growing” in the water and the worse it gets. This leads to chronic diarrhoea, which in turn can lead to stunting in Gaza’s children, as a British medical journal recently documented. One effect, von Medeazza says, is on “brain development,” and a “measurable effect on the IQ” of affected children.

High salinity and nitrate levels from Gaza’s collapsing aquifer – so badly overpumped that seawater is flowing in – are at the root of many of Gaza’s health problems. Elevated nitrate levels lead to hypertension and renal failure, and are linked to the rise in blue baby syndrome. Waterborne maladies like infant diarrhoea, salmonella and typhoid fever are caused by faecal contamination – both from the rooftop desalinated water and from the 110 million litres of raw and poorly-treated sewage that flows into the Mediterranean every day.

Because electricity here is shut off for 20 hours a day, Gaza’s sewage plant is essentially useless; hence, brown water spews into the sea, 24/7, from long pipes above a beach just north of Gaza City. Yet in the summertime, children continue to swim along Gaza’s beaches. 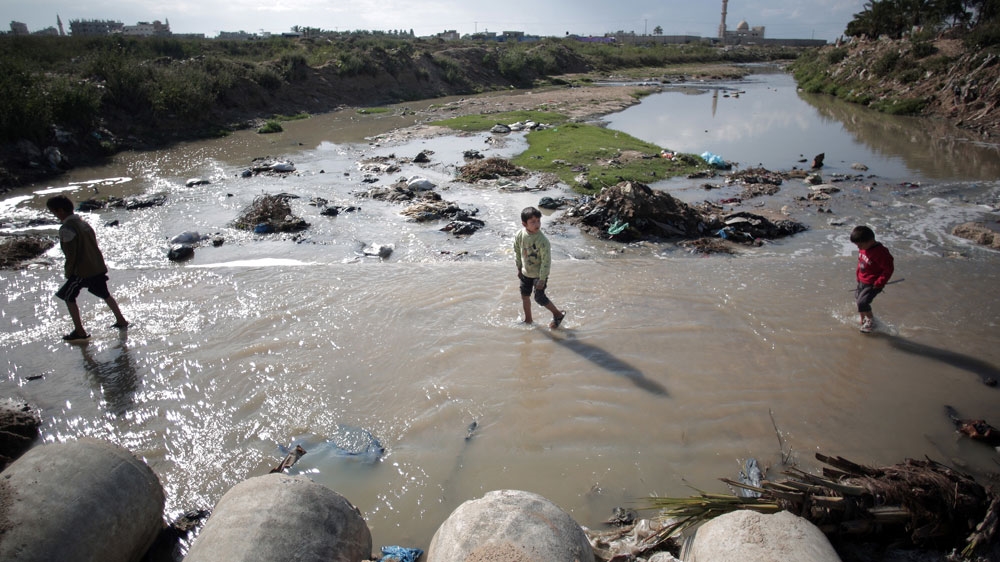 Children make their way through sewage water in Mighraqa neighbourhood on the outskirts of Gaza City [File: Khalil Hamra/AP Photo]

The severe shortages of water and electricity, along with rising poverty, have damaged nutritional levels, Dr Abu Samia says.

“It is affecting babies.”

Before the siege, he said, he had no patients suffering from malnutrition.

“We are seeing babies with marasmus” – a severe nutritional disease. “The last two years, it is increasing more and more.”

Gazans well remember the cynical words of Israeli minister Dov Weissglas in 2006, when he infamously compared the blockade to “a meeting with a dietician …We have to make them much thinner, but not enough to die.”

Gaza to become uninhabitable by 2020

Now, quite apart from the hundreds of deaths by rockets, missiles and bullets in the three most recent Gaza wars, children here are getting ill and dying from bad water and the infectious diseases that result.

“Occupation and siege are the primary impediments to the successful promotion of public health in the Gaza Strip,” declared a 2018 study in the Lancet, which cited “significant and deleterious effects to health care.”

Without a major intervention by the international community, and soon, humanitarian groups warn Gaza will become uninhabitable by 2020 – barely a year from now.

Failure to urgently intervene will result in “a huge collapse”, says Adnan Abu Hasna, Gaza spokesperson for UNRWA, the UN agency for Palestinian refugees, which recently had all its US funding cut by the Trump administration.

Otherwise, in less than two years, he says, “Gaza will not be a liveable place.”

And yet, liveable or not, the vast majority of Gaza’s two million people have nowhere else to go. Most are simply trying to live as normal lives as possible under extremely abnormal circumstances.

At dusk on a summer night, on a spit of rock and earth in the middle of Gaza harbour, five of those two million people try to enjoy a few minutes of quiet.

All around Ahmad and Rana Dilly and their three young children, the harbour ripples with life. Fishermen haul in their nets. Kids pose for selfies on broken concrete blocks and rebar – remnants of an old bombing raid.

“You are with Palestinians,” he laughs, dismissing those who reject his offer.

The Dillys have the same problems as many Gaza families.

Ahmad, a money changer, had to rebuild his shop in 2014 after an Israeli missile destroyed it.

Like most Gazans, the family has to contend with the salty water from the taps and the inherent risks of disease from the trucked water they rely on. But these problems mean little to them compared with their wish to feel safe and to enjoy fleeting moments of living like a normal family.

“I know the situation is horrible, but I just want to let my kids have a little change from time to time,” Ahmad says. “I want them to see something different. I want my family to feel safe.”

In the distance, an explosion echoes. Ahmad pauses for a short moment, then ignores it.

He says, “I come here to the sea, and forget about all the world.”