We have a moral obligation to act to end that horror.

That’s why we’re doing something about it — and we need you with us.

The Gaza Is Palestine campaign, led by us and Adalah Justice Project, is a new Palestinian-led effort committed to building upon the historic global movement to end Israeli occupation that ignited with new life in spring 2021 — and we want you to take part.

The Peoples’ Inquiry is an opportunity for the U.S. public to hear the accounts of Palestinians from Gaza on the massacres carried out by Israel in May 2021.

RSVP *now* to join us and thousands globally this Thursday, October 7th at 12PM ET for our public hearing on the May assault and ongoing siege of Gaza. 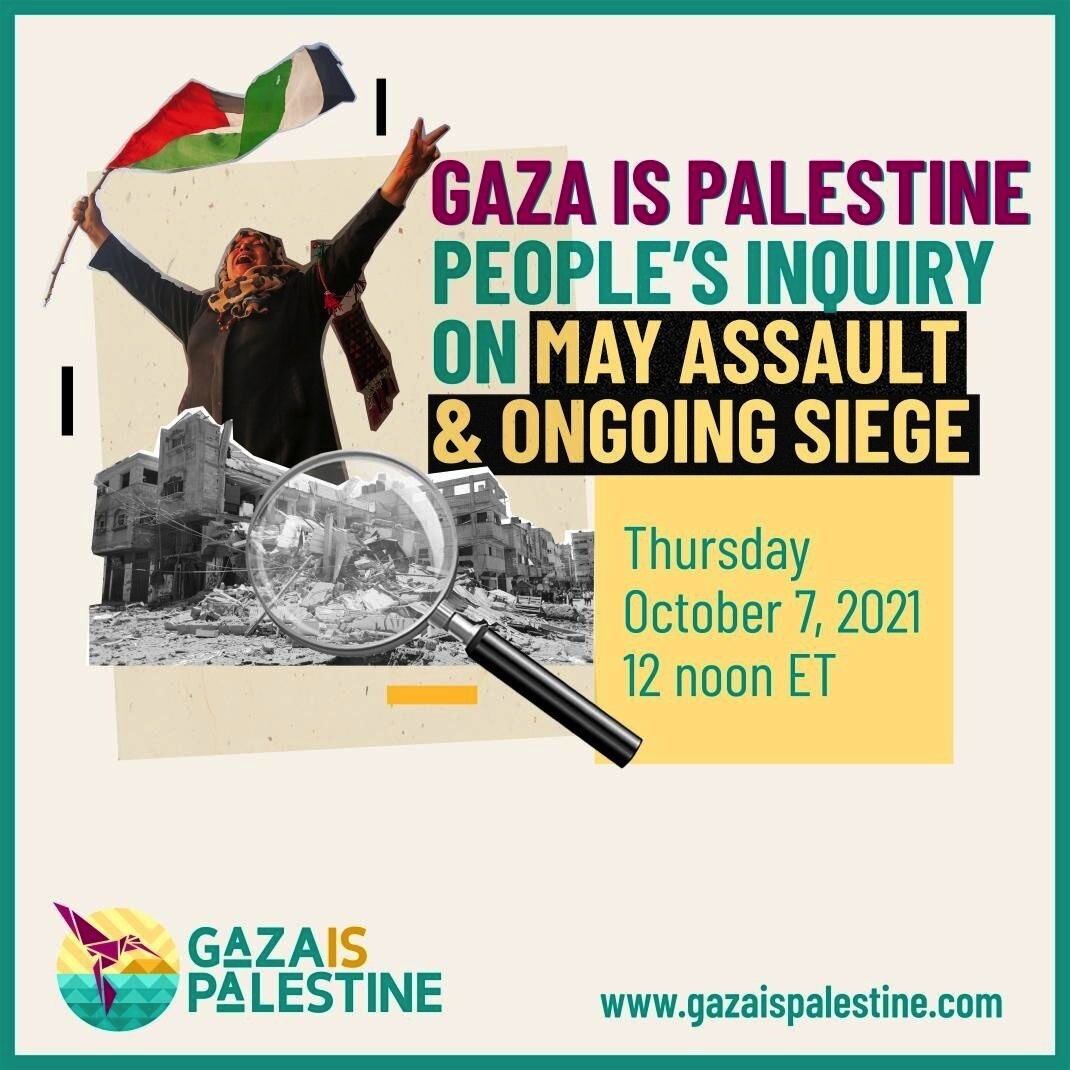 We will be bringing together lawmakers like Rep. Rashida Tlaib, activists from Gaza, and survivors of U.S.-backed bombings to demand an end to the flow of weapons to Israel’s apartheid regime.

We will be giving our platform during this hearing to representatives of the families who were devastated, and in some cases nearly entirely destroyed, by Israel’s U.S.-backed bombings.

A crucial part of the story we’ll be amplifying: how three Palestinian families on one street — Gaza City’s Wahda Street and on one night — May 16, 2021 — were altered forever.

Members of four generations of the Kawlak family were killed on that terrible night, 22 people from one family alone. They included 6-month old Qusai, his parents, his grandfather, and his great-grandparents. That same night on Wahda Street:

Diana Ziad Abu al-Ouf, another resident of Wahda Street, was seriously injured on May 16 and lay in critical condition in a hospital in Gaza. Her husband Alaa, couldn’t bear to tell her that their two daughters, Shaima and Rawan, and 12 other family members had died in the bombing. Diana died of her injuries on June 5, after being transferred to a hospital in the West Bank that Alaa was not allowed to access.

Three families, on one street, on one night.

Center Gaza: join us at the #GazaIsPalestine launch on Thursday.

Meanwhile: more than 80% of the Palestinians living in the Gaza Strip are from towns and villages just across the militarized border. From the rooftops of Gaza, Palestinians can see the homes of their grandparents and parents in Isdoud, Asqlan and other Palestinian towns ethnically cleansed by Israeli forces in 1948.

Although international law decrees that they should be home in a free Palestine, the people of Gaza are uniquely subject to bombings, restricted movement, and mass murder at the hands of Israel and its military support from the U.S.

We believe that Israel’s access to U.S. made bombs, fighter planes, and billions in military funding is not inevitable.

Massive global demonstrations in solidarity with resistance struggle in occupied Palestine are changing the tides towards liberation — and we can build on that momentum together.

Unprecedented support for Palestinian life has swept the mainstream media, our progressive movements, and even the halls of Congress.

For the first time ever, human rights organizations are more and more commonly naming Israel’s practice of apartheid, members of Congress are demanding that U.S. law take Israel’s war crimes seriously and limit the flow of tax dollars to its military, and outlets like New York Times are finally starting to make some effort to include Palestinian voices.

It’s up to us to make sure that tide doesn’t turn back.

Join our People’s Inquiry on the May Assault and Ongoing Siege on Gaza this Thursday, October 7th at 12PM ET.

Keep the stories of Palestinian families decimated by Israeli state violence in the public eye, shorten the distance between people in the U.S. and in Gaza, and awaken the people power necessary to hold Israel and its backers accountable.

Thank you for being in the struggle for a free Palestine with us.

Donate to MPower Change
MPower Change is a grassroots movement of diverse Muslim communities working together to build social, spiritual, racial, and economic justice for all people. Support our work.