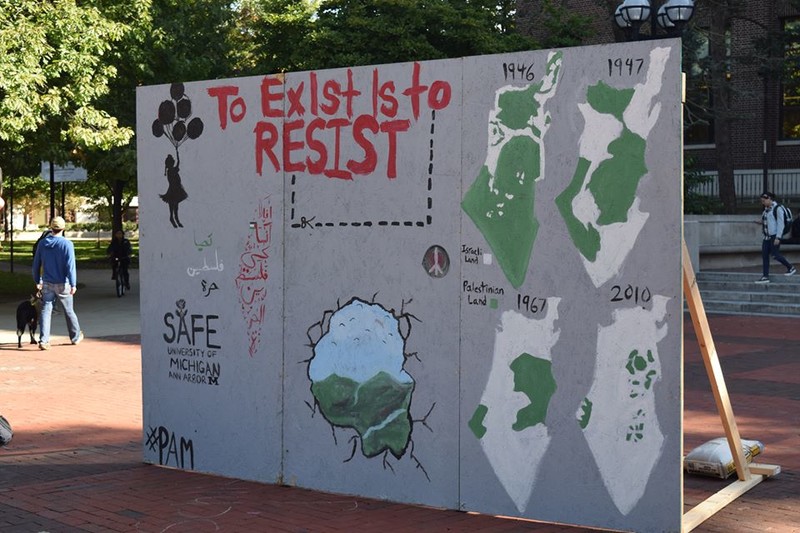 “Israel advocacy organizations driving the suppression cannot succeed in manufacturing facts, even if they try,”
Liz Jackson, an attorney with the organization Palestine Legal, told The Electronic Intifada.

Last week, the president of the University of Michigan defended Palestine solidarity activism on campus after student organizers were attacked for holding a protest against Israeli policies on the same day as a Jewish holiday.

In response to accusations that the protest was an affront to Jewish students, the protest’s organizers, Students Allied for Freedom and Equality (SAFE) stated that the charges fall “under the much larger wave of speech suppression that seeks to derail any valid criticism of Israeli state policy of oppression against Palestinians as a false claim of anti-Semitism.”

University president Mark Schlissel told The Michigan Daily, a campus newspaper, that SAFE “did what we want advocacy groups to do, and to me, they were advocating a political point of view.”

There, Israel-aligned groups and elected officials lost a long-waged battle to censor Students for Justice in Palestine (SJP) after a six-month independent investigation yielded results that did not support their claims.

The groups and pro-Israel lawmakers steadily pressured administrators at the City University of New York to censure SJP members, accusing them of being responsible for anti-Semitism on campuses.

In February, the Zionist Organization of America (ZOA), a right-wing lobby group, published a 14-page letter, claiming that SJP “has created a hostile campus environment for many Jewish students.”

Around the same time, local lawmakers also called for a ban of all SJP chapters on CUNY campuses.

The accusations against SJP triggered the investigation, which was led by a former federal judge and a federal prosecutor.

However, the investigation concluded last month that allegations of anti-Semitism on CUNY campuses cannot be attributed to Students for Justice in Palestine.

“There is a tendency to blame SJP for any act of anti-Semitism on any CUNY campus,” the report of the investigation stated. “That is a mistake.”

“This represents a strong statement in protection of students’ First Amendment rights,” states the Foundation for Individual Rights in Education (FIRE), “yet at least one New York legislator vows to continue his campaign against students whose views he finds unacceptable.”

FIRE was referring to Jack Martins, a state senator who has proposed legislation to ban student groups which advocate a boycott of Israel from receiving public funding.

ZOA, for its part, stated that it was “appalled” by the investigation’s conclusion, which it labeled “outrageous.” In a statement, the group reiterated its bogus claims that SJP is tied to “groups and individuals supporting terrorism” and asserted that SJP should still be banned from CUNY campuses while facing further punishments.

Morton Klein, the ZOA’s president, was “shocked” and “worse than disappointed” with the outcome of the investigation, the Forward reported.

Students at UCLA say they are relieved that the administration upheld their rights to affiliate with Palestine rights activism despite an orchestrated silencing campaign.

Milan Chatterjee, then president of UCLA’s Graduate Student Association, was found to have violated university policy on “viewpoint neutrality” last year when he put stipulations on funding for student groups based on their affiliation with Palestinian rights activism.

Students for Justice in Palestine had urged the administration to launch an investigation into Chatterjee’s actions.

Israel lobby groups on and off campus then jumped in to protect Chatterjee, using the incident as an opportunity to attack SJP and denigrate the Palestinian boycott, divestment and sanctions (BDS) movement.

The Forward reported that the American Jewish Committee, a right-wing Israel advocacy group, “had rallied to Chatterjee’s side, connecting him with high-powered lawyers to provide pro bono backing.”

After providing Chatterjee with legal aid, the AJC gave him an award for “students who have demonstrated unusual courage and moral clarity in standing up to anti-Semitism and the BDS movement.”

Two months before the university administration found Chatterjee in violation of campus policy, the Graduate Students Association had come to the same conclusion, but decided not to take action against him.

Chatterjee claimed that SJP members engaged in a smear campaign when they brought the complaints of free speech violations to the university’s Discrimination and Prevention Office.

Speaking to The Jewish Journal, Chatterjee said he left UCLA’s law school just before the fall semester began because of a perceived “hostile and unsafe” campus climate.

Yacoub Kureh, chair of the SJP chapter at UCLA, said that these claims are an attempt to further discredit SJP and the university for defending students’ free speech.

He added that SJP members were “very satisfied” that the administration “wasn’t falling for the gimmicks and the tricks.”

“At no point were we trying to attack [Chatterjee’s] character,” he told The Electronic Intifada. “We were trying to draw attention to something that was wrong, and now we’ve been cast as bullies.”

Meanwhile, he added, these kinds of free speech victories are valuable and will strengthen student activism.

“Otherwise we get trampled on and people think it’s ok to continue to trample on us, and they find more and more ways to do it,” he said.

“This is one of the times where the university stepped up and said, ‘you can’t go that far, you shouldn’t go down that route.’”

An independent investigation carried out for administrators at San Francisco State University upheld the right of students to have protested a speech by Jerusalem mayor Nir Barkat in April this year.

After students protested Barkat’s policies of expulsion and violence against Palestinian residents of Jerusalem, they were subsequently accused by right-wing Zionist groups of anti-Semitism and of threatening Jewish students on campus.

The report of the investigation “finds that our protest was disruptive, but for students of conscience, the real disruption was the mayor of occupied Jerusalem coming to campus,” the General Union of Palestinian Students stated.

“His explicit agenda is to remove Palestinians from the city and he was given a platform to whitewash and propagate his policies,” the group added. “Not only were we subjected to this hate monger, but we were investigated for months and publicly smeared as violent and anti-Semitic. The report proves that these allegations are false.”

Palestine Legal has noted assurances that the university “is re-examining speech policies and planning to ensure full implementation for future campus protests.”

Lawyers say they will continue to monitor how such speech policies are applied, as SFSU president Les Wong has previously criticized the protest against Barkat and complained about the state of “civil discourse” on campus.

Liz Jackson of Palestine Legal explained that accusations against students involved in Palestine solidarity campaigning at the University of California, Irvine were also found to be meritless in August.

“In every case where an objective investigator takes a close look at campus events, allegations that SJP engaged in anti-Semitism are exposed as false,” she said.

“Campus activists are on a winning streak because their speech activity is principled and because it’s protected by law. Investigators see that.”