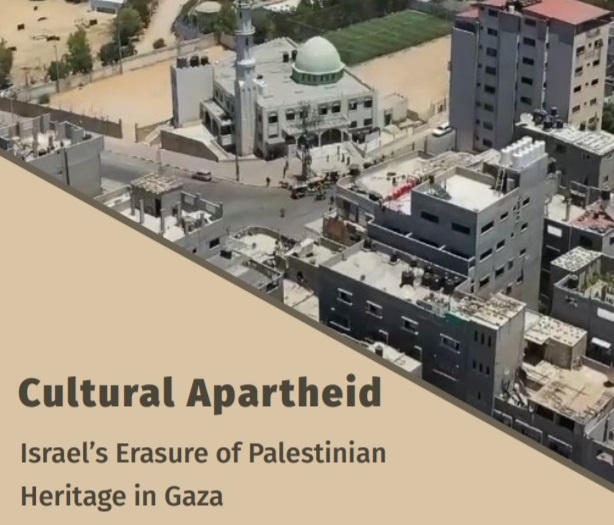 On 23 February 2022, Al-Haq launched its report titled “Cultural Apartheid, Israel’s Erasure of Palestinian Heritage in Gaza”. The report builds from an investigation by the London-based research agency Forensic Architecture using advanced technologies and ‘open-source’ techniques to reconstruct one of the most significant archaeological sites in the occupied Gaza Strip. The report draws on Israel’s strategic bombing of the Gaza coastline to exemplify the erasure of Palestinian cultural heritage and the denial of the relevant human rights. Israel’s bombardments not only breach the principle of military necessity in violation of the laws of armed conflict, but also aim at gradually erasing Palestinian cultural heritage to deny the Palestinian people of their right to self-determination over their cultural resources, and by extension threatens their existence as a people. Such bombings are a gross violation of the Rome Statute, constituting war crimes, and crimes against humanity.

In the report, Al-Haq outlines that the bombing of the site may amount to a war crime and contributes to the crime against humanity of apartheid.[1] The targeting of Palestinian cultural heritage, fundamentally affects the core of their identity and existence as a people. For example, the International Criminal Court underlines the nexus between destruction of cultural heritage and crimes against humanity, especially when the former occurs within the context of an attack against the civilian population, forms part of a state policy and is carried out in a widespread or systematic manner.[2] Additionally, under the Rome Statute, the crime of apartheid when committed as part of a widespread or systematic attack against the civilian population, with knowledge of the attack, amounts to a crime against humanity.[3]

During Israel’s military offensive on the Gaza Strip between 8 July and 26 August 2014, Al-Haq reported the complete and partial destruction of 61 and 120 mosques, in addition to the partial destruction of one church.[4] Similarly, during the May 2021 military offensive, antiquities and cultural heritage sites were both directly targeted and indirectly damaged due to their close proximity to affected areas. In the latest military assault on the Gaza Strip between 10 and 21 May 2021, Palestinian human rights organizations reported damage to public and private properties including 124 places of worship, of which 7 were completely and 117 partially destroyed, one market which was partially destroyed, and damage to 37 tourism facilities – 6 completely and 31 partially destroyed.[5] Al-Haq has warned of the ongoing deterioration of the situation in the Gaza Strip as a result of 14 years of prolonged closure, and four major military offensives carried out against the civilian population by Israel, the Occupying Power. The attacks on the Gaza Strip have resulted in serious humanitarian crises rendering the territory uninhabitable,[6] and amounts to unlawful collective punishment.[7]

Israel’s criminal enterprise in dealing with Palestinian cultural heritage is once again reflective of its overall apartheid regime perpetrated against the Palestinian people as a whole: under the veil of international legal instruments that it ratified without implementing them, Israel sets up two distinct standards tailored upon their added value to the entrenchment of the Zionist narrative over Palestinian lands. On one hand, cultural heritage sites that serve this narrative and are directly controllable by the Israeli Occupying Forces are appropriated and exploited to reinforce this narrative. On the other hand, cultural heritage sites that conflict with this narrative are, straightforwardly or not, targeted, damaged and destroyed, in an attempt to erase them from memory of people.

In light of the report and the investigation by (FA), Al-Haq call on:

• The UN Special Rapporteur in the Field of Cultural Rights, Alexandra Xanthaki, to use her good offices to preserve and protect the Palestinian people’s ability to preserve, protect and develop their cultural heritage, and more specifically to request a country visit to Palestine and report on Israel’s violation of Palestinian cultural rights;

• For the Prosecutor of the International Criminal Court and the UN Commission of Inquiry to take into particular account Israel’s practices of indiscriminate and systematic attacks on Palestinian cultural heritage artefacts, properties and sites;

• The Prosecutor of the International Criminal Court and the UN Commission of Inquiry to consider attacks on cultural property as amounting to war crimes, and evaluate their crucial contribution to inhumane acts of apartheid under the Rome Statute and where relevant, the Apartheid Convention and international human rights law;

• The UN Educational, Scientific and Cultural Organization to use their good offices to organize the protection of Palestinian cultural property, as per Article 33(1) of the Second Protocol to the Hague Convention of 1954 for the Protection of Cultural Property in the Event of Armed Conflict;

• Third States to recognize Israel’s unlawful destruction of Palestinian cultural heritage, primarily in Gaza, as a fundamental element that enables Israel to further its colonial project in Palestine, and to entrench its apartheid regime over the Palestinian people as a whole and their lands by erasing their cultural identity as a people;

Video by Forensic Architecture in English

Video by Forensic Architecture in Arabic

[1] Al-Haq Highlights Israel’s Apartheid Regime and Call for Accountability at the 46th Session of the UN Human Rights Council, 2021, Available at: https://www.alhaq.org/advocacy/18174.html

[5] According to the Palestinian human rights organizations’ terminology, ‘total damage’ refers to the destruction or damage of a property “to such an extent that it can be neither recovered nor repaired for further use, so the property must be demolished and rebuilt;” ‘severe partial damage’ refers to “damage that exceeded the destruction of windows, doors, and water tanks, and led to the demolition of walls or main pillars; nevertheless, the house is repairable and can be used as a new house;” ‘partial damage’ refers to “damage that did not affect walls or main pillars, and is limited to burning and destruction of windows, doors and water tanks;” ‘minor damage’ refers to damage such as “broken window panes, damage to water tanks or damage to furniture.” Joint Report Al-Haq, AlMezan and Palestinian Centre Human Rights, “May 2021 Assault in Numbers: A Statistical Report on Civilian Casualties and Damage of Private and Public Properties by Israeli Occupation Forces During Israel’s Full-Scale Military Operation on the Gaza Strip Between 10-21 May 2021” [on file with Al-Haq].