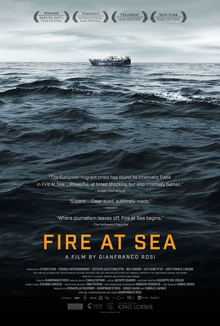 Open Doors For Refugees presents Academy Award Nominee for Best Documentary Feature
FIRE AT SEA, Gianfranco Rosi’s award-winning documentary about the heavy toll of the migrant crisis, and the price of freedom.

This fundraising event is sponsored by Open Doors for Refugees, a growing community volunteer organization advocating for, welcoming and helping settle refugees in the greater Madison area. See facebook.com/OpenDoorsForRefugees.

Tickets: $15.00 General Admission, Available At The Door
Advance tickets online and by phone at (608) 241-8633,
with $2 per ticket credit card convenience fee.
Make an additional tax deductible donation to Open Doors For Refugees
Seeking Sponsors at $100, $250, and $500 levels. Special reception after the show for those making donations of $100 or more.

Fire at Sea was an Academy Award® nominee for Best Documentary Feature and the first nonfiction film to ever win the top prize at the Berlin International Film Festival. The film takes place in Lampedusa, a remote Mediterranean island that has become a major entry point for refugees into Europe. It jolts the audience into a new understanding of what is happening in the region, the heavy toll, and the price.