As Israeli lynch mobs roam the streets attacking Palestinians, and as Israeli war planes drop bombs on Gaza, it’s essential to understand how we arrived at this moment. 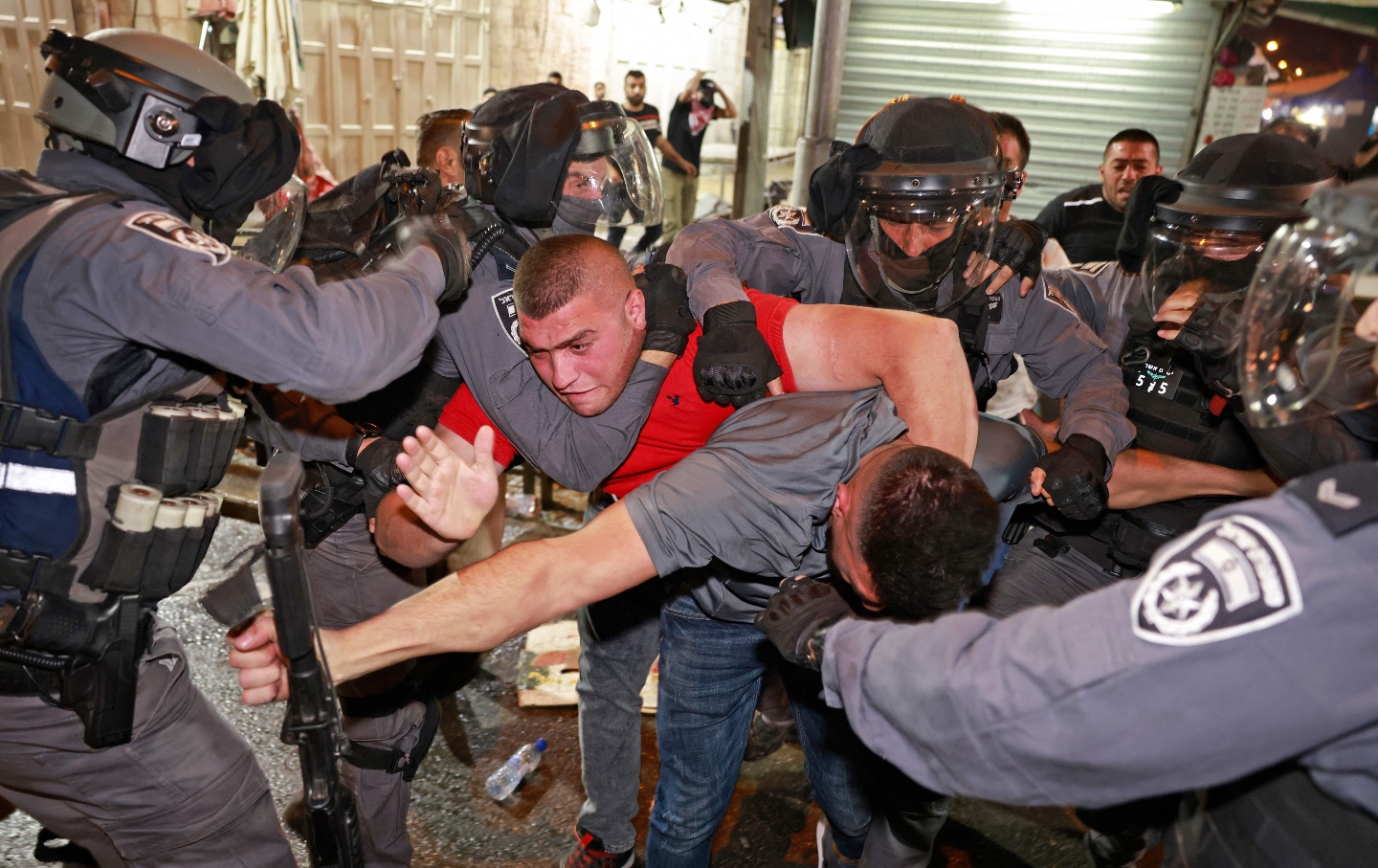 Israeli forces respond to a Palestinian man protesting in Jerusalem by placing him in a choke hold. (Photo by Menahem Kahana / AFP via Getty Images)

I have been trying to think of a moment since 1948 when so broad a range of Palestinians have been exposed to as great a level of Israeli violence as they have been these last few days—and I don’t think I can.

In towns throughout Israel, Palestinians have been beaten and terrorized by rampaging mobs; one man was dragged from his car and brutalized in what many are describing as a lynching. In the West Bank, Palestinians have been shot and killed in raids by the Israeli military. In Jerusalem, Palestinian families, facing the ongoing threat of expulsion, have been harassed by settlers and military alike. And across Gaza, Israeli war planes have dropped bomb after bomb, destroying entire apartment buildings. Many have died, many more have been injured. If they manage to survive, they will witness their society shattered when the smoke clears.

The origins of this moment are as obvious as they are painful, but they bear explaining and re-explaining for a world that too often fails—in fact, refuses—to see the true terms of Palestinian suffering.

To understand how we’ve arrived at this moment, it is essential to start with the story of Sheikh Jarrah. That small Jerusalem enclave, from which several Palestinian families have been under threat of expulsion, is perhaps, the most immediate proximate cause of this latest crisis. It is also just the latest targeted dispossession of Palestinians by Israel, which has been part of a more than 70–year process.

Since occupying the West Bank in 1967, the Israeli government has pursued various policies aimed at demographically engineering the city of Jerusalem—again, all with an eye toward ensuring its perpetual dominance over the city. Among such policies are the building of illegal settlements around the city to cut it off from the rest of the Palestinian population in the West Bank; the restriction of movement to deny Palestinians access to and within the municipality itself; the revocation of Palestinian residency status, which is tantamount to expulsion; and the demolition of Palestinian homes. The Israelis also expel Palestinians from their homes, as we are witnessing in Sheikh Jarrah, so that they can be handed to Israeli settlers.

Such policies have created a uniquely potent set of threats, humiliations, and injustices targeting Palestinians in Jerusalem. Yet what is happening in Sheikh Jarrah is not just about Jerusalem but is also reflective of the entire Palestinian experience. Since the start of Zionist settler colonialism in Palestine, the aim has been to slowly and steadily expand control over the territory, pushing the indigenous population out in a continual process of replacement. The single biggest episode of this was the Nakba of 1948, during which Jewish militias and then the state of Israel depopulated hundreds of towns and villages, made nearly two-thirds of the Palestinian Arab population refugees, and subsequently denied their return, first by military force and then by force of law. But the process did not stop there. In the decades since, the settler colonial process has moved forward in Jerusalem, the West Bank, and Gaza through the building of settlements, land theft, and brute military force.

All of this would be tinder enough for this moment, but it also happens to be taking place in a broader immediate context, one in which the vise grip of accelerating right-wing, theocratic nationalism is tightening across Israel. Recent Israeli elections brought outright Kahanists – Jewish theocratic extremists who seek to deny any rights to Palestinians and embrace ethnic cleansing—into the parliament in their most significant numbers ever. Right-wing ideologues have long dominated the Knesset, but as Israeli politics shifts ever right-ward, enabled by internationally ensured impunity, there is now increasing political space for the most open and direct racism we have seen. (It should therefore come as no surprise that it has burst out into the streets in the shape of lynch mobs.)

These new depths of depravity have coincided with the possibility that the Likud party, whose leader Benjamin Netanyahu has dominated Israeli politics longer than any other, risks losing power. This is not due to a challenge by those to his left, but those to his right who seek to replace him.

What makes the threat to Netanyahu’s grip on power particularly dangerous is that he is perhaps the most seasoned Israeli politician when it comes to riling up violence by his followers in moments of political turmoil. It is a tactic he has often deployed, perhaps most famously just before of the assassination of his political rival Yitzhak Rabin by a right-wing Israeli in 1995. Since the election in March, these violent extremists have escalated their attacks on Palestinians throughout the West Bank and have rampaged in Jerusalem, shouting “Death to Arabs” as they marched through the Old City. These attacks, fully tolerated if not outright supported by the state, further escalated during the holy month of Ramadan, culminating first with efforts by the Israeli government to shut down the Damascus Gate and then, ultimately, with the brutal raids we have seen this week by the Israeli military inside Al-Aqsa mosque.

Once again, these events, on their own, would have been enough to bring the region to this volatile and fast-shifting moment. Yet there have also been other events, and other shifts—most notably, perhaps, the rupture of an experiment in the politics of Palestinian citizens of Israel. The Joint List, which brought together several smaller parties, once reached 15 seats in the Israeli Knesset, but it broke apart this time as some parties indicated a willingness to back a Netanyahu government for the right price. The failure of this experiment was the failure of the very idea that Palestinian citizens of Israel could have their grievances addressed by participating in the Israeli government. As even these limited mechanisms of representation faltered, people were primed to take to the streets. Just as the election was taking place, thousands of Palestinian citizens of Israel rallied in the city of Umm al-Fahem, carrying Palestinian flags, and singing of their beloved homeland, foreshadowing many of the events in recent days.

Nor was it only in Israel that Palestinians have been turning away from institutions that have failed them. In late April, Palestinians throughout the West Bank, Gaza, and Jerusalem were denied the opportunity to express their voices about their so-called leaders in the Palestinian Authority when PA President Mahmoud Abbas postponed Palestinian elections indefinitely. The elections, announced in January, would have been the first in 15 years. But Abbas called off the elections because they could have presented a serious challenge to his party, and his rule, since Israel would not permit Palestinians in Jerusalem to participate in the vote. The denial of even this limited opportunity for political expression undoubtedly contributed to the mass mobilizations we are witnessing.

The representative vehicles for Palestinians, throughout all of Palestine, have broken down irreparably. But that may not be a bad thing, since those vehicles have effectively driven them to a dead end of greater fragmentation and occupation. While many had come to this conclusion long ago, the mass mobilizations we began seeing several days ago in the streets, from Jerusalem, to Haifa, Nazareth, al-Lyd, Umm al-Fahem, Ramallah, Gaza, in refugee camps, and in the diaspora around the world have showed that a new generation not only recognizes this but that they are starting to act on it. These mass mobilizations that have united Palestinians show a shared understanding of their struggle and perhaps even the embryonic form of a united, coordinated effort against Israeli settler colonialism in all its manifestations.

The struggle for freedom is a constant journey, with stops called hope and despair along the way. While the last few days have given me incalculable reasons to despair, it is in the possibility of a united Palestinian effort, glimpsed these last few days, that I have seen a shard of hope. When freedom comes, and when the history of the struggle for it is being written, I hope this moment will prove to be a transformational one. To this end, we all have a role to play, and it is incumbent on people who believe in justice to stand in solidarity with Palestinians today and until the journey ends.