END_OF_DOCUMENT_TOKEN_TO_BE_REPLACED

The verdict in the civil lawsuit against the state of Israel for the killing of peace activist Rachel Corrie more than nine years ago was announced Aug. 28 at the District Court in Haifa, Israel. While many human rights advocates had high hopes that the court would provide a much needed venue for justice, this verdict marks yet another setback for the cause of human rights in Palestine.

Rachel Corrie was a 23-year-old American human rights activist from Olympia, Wash. She was crushed to death on March 16, 2003, by Israeli soldiers driving a huge militarized Caterpillar bulldozer as she nonviolently protested the demolition of Palestinian civilian homes in Rafah, where the Israeli military was razing entire neighborhoods along the Egypt-Gaza border.

At the time, four eyewitnesses testified that Rachel, wearing a fluorescent orange vest and shouting through a bullhorn, was clearly visible to soldiers in the bulldozer as they approached. They stated that after trapping Rachel under a mound of dirt, the operator lowered the bulldozer’s blade and backed it over Rachel, crushing her skull and breaking her back.

Yet an Israeli government investigation found no fault on the part of the soldiers. Instead, they publicly blamed Rachel for her own death.

END_OF_DOCUMENT_TOKEN_TO_BE_REPLACED

On Thursday August 30th, Allen Ruff interviewed Craig Corrie about the recent verdict from an Israeli Judge regarding his daughter, Rachel Corrie’s death. Judge Oded Gershon rejected the parent’s negligence lawsuit, stating that Corrie’s death was an accident that she brought upon herself. Over nine years ago in March of 2003, peace activist Rachel Corrie was killed by an Israeli military bulldozer in the Gaza Strip. Every since her death, her parents Cindy and Craig Corrie have sought justice for their daughter’s murder as well as continued her vision of peace through the The Rachel Corrie Foundation for Peace & Justice. Craig and Cindy say the judge’s verdict that Israel was not responsible for her death has “deeply saddened and deeply troubled” the family.

The Foundation which Rachel Corrie’s parents started after her death “continues the work that Rachel Corrie began and hoped to accomplish, and carries out that work with her vision, spirit, and creative energy in mind. We conduct and support programs that foster connections between people, that build understanding, respect, and appreciation for differences, and that promote cooperation within and between local and global communities. The foundation encourages and supports grassroots efforts in pursuit of human rights and social, economic, and environmental justice, which we view as pre-requisites for world peace.”

To learn more about The Rachel Corrie Foundation for Peace & Justice:

END_OF_DOCUMENT_TOKEN_TO_BE_REPLACED

I’m a Palestinian who was born in the Israeli town of Lod, and thus I am an Israeli citizen. My wife is not; she is a Palestinian from Nablus in the Israeli-occupied West Bank. Despite our towns being just 30 miles apart, we met almost 6,000 miles away in Massachusetts, where we attended neighboring colleges.

A series of walls, checkpoints, settlements and soldiers fill the 30-mile gap between our hometowns, making it more likely for us to have met on the other side of the planet than in our own backyard.

Never is this reality more profound than on our trips home from our current residence outside Washington.

END_OF_DOCUMENT_TOKEN_TO_BE_REPLACED

The Madison-Rafah Sister City Project has a library of films about Palestine available for free public showings or household viewing. We can also help introduce the films and facilitate discussion.

To commemorate the anniversary of the Palestinian Nakba, the American-Arab Anti-Discrimination Committee (ADC) announced the online publication of a guide to Palestinian film and filmmaking. It features information on and access to hundreds of films and film institutions, giving an unprecedented overview of almost every aspect of Palestinian filmmaking.

The filmography provides detailed information on individual narrative and documentary films by and about Palestinians. Films included are both full length and shorter. Their subject matter deals with Palestinians in the West Bank and Gaza, in Israel, and in exile around the world. They address the history and politics of the conflict with Israel, the experience of exile, daily life under occupation, the resistance to occupation and dispossession, reconciliation with Israelis, women’s issues, religion, and culture. Many films focus on political issues; some are entertainment films; in a few the aesthetic dimension is primary. There is information on grassroots films made by human rights organizations and by ordinary Palestinians documenting their own lives and communities.

END_OF_DOCUMENT_TOKEN_TO_BE_REPLACED 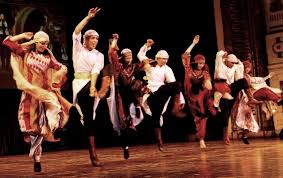 Diyar Dance Theatre of Bethlehem: 40 talented, enthusiastic and committed dancers, male and female, of different age groups and backgrounds. The vision of Diyar Dance Theatre is to celebrate Palestinian culture and history through traditional dances, while promoting creativity.

END_OF_DOCUMENT_TOKEN_TO_BE_REPLACED ABEL KERSHNER and FARES AKRAM, New York Times, April 1, 2012
The woman, Hana Shalabi, 30, from the northern West Bank, was the second Palestinian this year to have challenged and changed the terms of their “administrative detention,” a practice of the Israeli military courts that allows imprisonment based on secret informants or information and that has been used against thousands of Palestinians over the years.
Both Ms. Shalabi’s case and that of Khader Adnan, 33, who ended a 66-day fast
in February in return for a reduced term, drew international attention to the continuing use of administrative detention and prompted concerns in Israel that a hunger strike to the death could set off widespread unrest.

END_OF_DOCUMENT_TOKEN_TO_BE_REPLACED

The Madison-Rafah Sister City Project invites you to the

All proceeds go to the Maia Project water filtration system for the Al-Shuka Girls Preparatory School in Rafah, Palestine

END_OF_DOCUMENT_TOKEN_TO_BE_REPLACED

Dr. Mads Gilbert, one of two Norwegian doctors who remained in Gaza under fire during Israeli Operation Cast Lead, will be in Madison to speak about his experiences. Both he and his colleague, Dr. Erik Fosse, testified as expert witnesses at subsequent Human Rights Committee Sessions held at the United Nations in Geneva after the attack. In January, 2012 Dr. Gilbert returned to Gaza where he met with his colleagues from Shifa Hospital, friends, and many of the patients he operated on, including the girl below.

Dr. Gilbert will address the US role in Operation Cast Lead, the use of illegal weapons on a civilian population, the ethics of weapons sales to countries that have used or tested weapons illegally, and the aftermath of Cast Lead with the continuing siege and blockade of the Gaza Strip 3 years later. It will include details of Dr. Gilbert’s January visit to Gaza, and will also look at the broader, regional context of the Israeli-Palestinian struggle within the “Arab Spring”.

Mads Gilbert is a specialist in anesthesiology and a leader of the emergency medicine department of University Hospital of North Norway, and has been a professor of emergency medicine at the University of Tromsø since 1995. Dr. Gilbert co-founded NORWAC, a Norwegian-Palestinian humanitarian aid organization. He worked in an underground Palestinian refugee camp hospital in Beirut during the 1982 Israeli invasion and bombardment of Lebanon.

END_OF_DOCUMENT_TOKEN_TO_BE_REPLACED 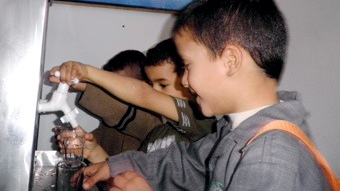 Here in Wisconsin we’ve hardly been hibernating. So much is happening at the state and local level, to say nothing of the 2012 presidential campaign.

But now and again we need to stick our noses out of our local dens and act as citizens of the wider world.

So for GROUNDHOG’S DAY we suggest that you check out our “CLEAN WATER FOR RAFAH’S CHILDREN” campaign and for VALENTINES DAY, turn on the love with a contribution towards a water filter/desalinization system for the Al-Shuka Preparatory Girl’s School in Rafah.

MAIA is Arabic for “water.” The Middle East Children’s Alliance (MECA) began the MAIA campaign when children at a UN school in Gaza were asked what they wanted most for their school. The children replied, “clean water.”