A new Fair Trade Crafts sale has been added outdoors to the Madison Children’s Museum Annual Benefit Sale of American Girl Returns & Seconds. The Madison-Rafah Sister City Project and other local groups will be participating.

Tickets for the 2009 sale are SOLD OUT! MCM members can shop without a ticket starting at 2:30 p.m. on Saturday, July 18. At 3 p.m. the general public can enter the warehouse with free tickets. These free tickets will be issued at the MCM information tent beginning at 10 a.m. on the day of the sale.

Thank you for your interest and support of this important fundraiser for Madison Children’s Museum and American Girl’s Fund for Children. We want loyal supporters like you to be aware of important changes that will be made in 2009.

Thank you for your patience and ongoing support while we continue to determine the details of this year’s sale. Please check back regularly for updates. If you have immediate questions, please contact Marianne Madar, our sale manager, at mmadar@madisonchildrensmuseum.org. We appreciate your patience.

END_OF_DOCUMENT_TOKEN_TO_BE_REPLACED

As part of the Sunday service at 10 am on July 19 there will be a presentation on Palestine organized by the Social Action Committee of the Prairie Unitarian Universalist Society.

The presenters will be Nathan Beck and Sol Thea Kelley-Jones, solidarity workers and human rights activists who have worked on the ground in the Occupied Palestinian Territories of the West Bank.

President Obama has said that “the only resolution is for the aspirations of both sides to be met through two states, where Israelis and Palestinians each live in peace and security.” The Prairie program will report on current developments in Palestine, followed by a discussion of how a two state solution could be achieved.

“America’s strong bonds with Israel are well known. This bond is unbreakable. It is based upon cultural and historical ties, and the recognition that the aspiration for a Jewish homeland is rooted in a tragic history that cannot be denied. Obama further stated “that it is also undeniable that the Palestinian people – Muslims and Christians – have suffered in pursuit of a homeland. For more than sixty years they endured the pain of dislocation. Many wait in refugee camps in the West Bank, Gaza, and neighboring lands for a life of peace and security that they have never been able to lead. So let there be no doubt: the situation for the Palestinian people is intolerable. America will not turn our backs on the legitimate Palestinian aspiration for dignity, opportunity, and a state of their own.”

BERLIN — Taking its cue from the old song, the fruit of Eran Riklis' wise and poignant film "Lemon Tree" is as unpalatable as the age-old and relentless friction between Israel and the West Bank.

It's a simple tale of a Palestinian woman who refuses to allow her lemon grove to be destroyed by the Israeli military, which claims that it might harbor terrorists. Its universal story of a stubborn individual who resists powerful forces and the two lonely women who connect as a result will resonate with grown-up audiences everywhere.

Hiam Abbass, who appeared in Riklis' 2004 picture "The Syrian Bride," stars as Salma Zidane, the sorrowful owner of a small lemon grove full of trees planted by her late father. Her husband died 10 years earlier and her children have grown and moved out.

Riklis and co-writer Suha Arraf take time to establish Salma's relationship to the lemon trees as she tends them lovingly, sleeps in the shade of their branches, hears the fruit fall one by one, jars pickled lemons and makes very tasty lemonade.

Trouble comes along fast, however, when Israel's new defense minister, Israel Navon (Doron Tavory), who makes political capital with bold statements about defending his nation from terrorists, moves into a house on the West Bank border right next to Salma's lemon grove.

END_OF_DOCUMENT_TOKEN_TO_BE_REPLACED

Dr. Najat Rahman will give a lecture about the late Palestinian poet Mahmoud Darwish and the significance of his poetry. The lecture will be followed by a question and answer session.

Friday, April 24th
7:30 to midnight
On Wisconsin Room, Red Gym
UW-Madison
This is a cultural night that will include UW-Madison poets reciting their work as American poets interacting with Darwish for the first time, a lecture by Dr. Rahman, Arabic music, poetry recitation in Arabic and English, and a fantastic art exhibit from Palestine. Free food reception included.

A vegetarian Middle Eastern dinner will be served at 6 pm, simultaneously with a cooking demonstration by Chef Sabi Attiyeh – baklava and dolmas (stuffed grape leaves) – followed by a presentation with slides by Lora Gordon, activist recently returned from two months in Rafah and Gaza. Entertainment will be provided by East High School jazz quartet.

Funds raised will go to the Middle East Children’s Alliance (MECA) for Gaza relief. Tickets: $15 in advance, for reservations contact Bill at kursk1 at tds.net. Perhaps the most interesting aspect of Simone Bitton’s documentary “Rachel,” which premiered this week at the Tribeca Film Festival, is what’s not in it. Bitton, a Moroccan-born Jewish filmmaker who spent many years in Israel and now lives in France, conducts a philosophical and cinematic inquiry into the death of Rachel Corrie, the 23-year-old American activist who was killed under ambiguous circumstances in the Israeli-occupied Gaza Strip in March 2003. But the political firestorm that followed Corrie’s death, which saw her beatified as a martyr for peace by some on the left and demonized as a terrorist enabler by some on the right, is virtually absent from the film.

We do not see the infamous photograph of the keffiyeh-clad Corrie burning an “American flag” — not a real flag, but a crude children’s drawing of one — at a demonstration about a month before her death. Nor do we see the torrent of exaggerated and often shocking verbal abuse to which Corrie was subjected, postmortem, on right-wing bulletin boards and Web sites. Corrie, who suffered massive internal injuries when she was either crushed by a bulldozer or buried under construction debris, was routinely dubbed “Saint Pancake” in such venues, or described as “terrorist-loving swine.” (That’s without getting into the grotesque sexual fantasies and elaborate conspiracy theories.)

Bitton approaches Corrie’s death from an Israeli point of view, which means she sees it quite differently from the way Americans do. For her, it’s partly a forensic puzzle — an episode of “CSI: Gaza” without a clear resolution — and as a philosophical challenge to the military and political status quo. It’s important to understand that within Israel, Corrie’s encounter with a military bulldozer (an enormous armored machine called the Caterpillar D9, built in the United States to Israeli specifications) and the subsequent investigation were a relatively minor news blip, not the full-on media frenzy we enjoyed.

While it’s unusual for a Westerner to die in the Israeli-Palestinian conflict, Corrie was neither the first nor the last, and no individual death can make much impression amid the constantly clicking body count on all sides. In the film, one of Corrie’s friends recalls that the Gaza hospital mortuary had to move her body out to make room for someone else, a Palestinian man who had reportedly left his house to smoke a cigarette and was shot by an Israeli sniper.

After an internal inquiry, the Israeli military announced that Corrie’s death was a tragic accident, and that the bulldozer driver who ran her over (or maybe buried her beneath a mound of dirt) never saw her or heard her. Corrie’s fellow activists and Palestinian onlookers continued to insist that she was plainly visible, standing on a raised berm of earth in a bright orange vest, and that the driver killed her deliberately. The whole thing floated away on a cloud of irresolution — another not-quite-explained killing in the occupied territories — and other stories took over the Israeli front pages.

END_OF_DOCUMENT_TOKEN_TO_BE_REPLACED 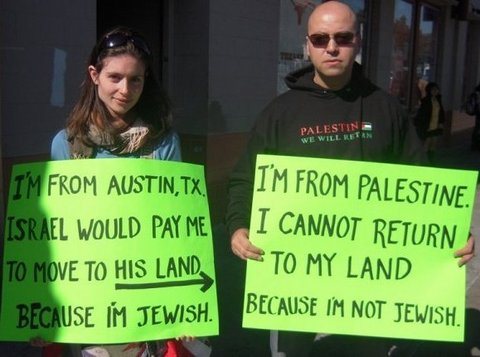 Anna Baltzer, Jewish-American granddaughter of Holocaust refugees, will present her slides, stories, & book Witness in Palestine, recounting first-hand experiences with the conflict while living with Palestinians in the West Bank.

Free and open to the public. Booksigning to follow talk.

The unpleasant and unavoidable comparison is with South Africa during the Apartheid period. ― Richard Falk, 2001 United Nations Fact-finding Commission in the West Bank and Gaza